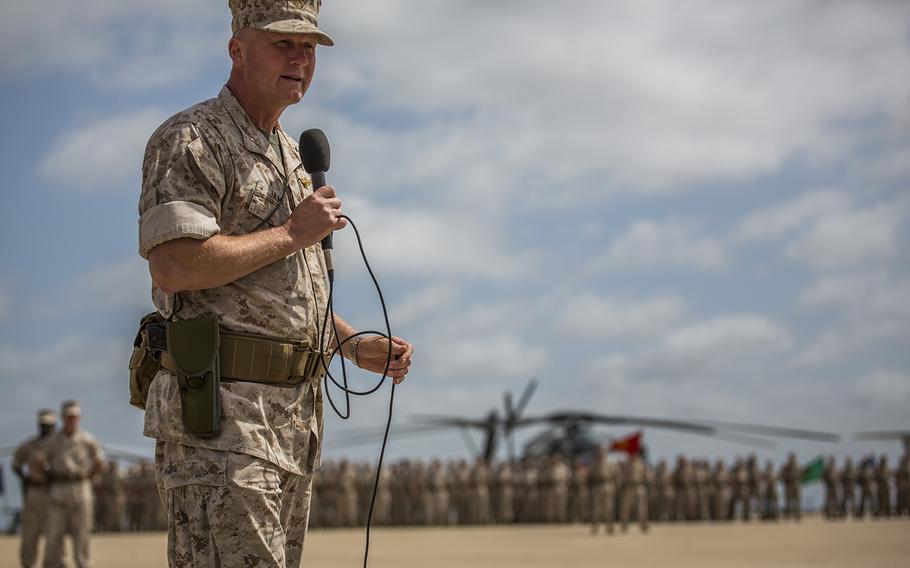 WASHINGTON — The Marine KC-130T tanker-transport aircraft that crashed into the Mississippi Delta on Monday evening, killing 15 Marines and a sailor developed problems in midair though investigators are still working to determine what happened, a Marine general said Wednesday.

“Indications are something went wrong at cruise attitude,” Brig. Gen. Bradley S. James, the commander of 4th Marine Aircraft Wing of the Marine Reserves, said Wednesday during a brief news conference in Itta Bena, Miss. The small town — about 80 miles north of Jackson, the state capital — is where the plane smashed into a soybean field, killing all 16 servicemembers aboard and leaving a trail of debris for miles.

Investigators from local, state, federal and military agencies are expected to spend weeks combing the debris field, which spans 2 to 3 miles, to find clues that will lead them to what happened before the plane crashed en route from Marine Corps Air Station Cherry Point in North Carolina to Naval Air Field El Centro in California.

The plane was carrying seven members of the Marines’ elite special operations 2nd Raider Battalion, who were eventually traveling to a pre-deployment training exercise in Yuma, Ariz., the Marine Corps said. Those servicemembers included six Marine commandos and a Navy hospital corpsman assigned to that unit based at Camp Lejeune, N.C. The other nine killed in the crash were crewmembers from the Marine Aerial Refueling and Transport Squadron 452, Marine Air Group 49, 4th Marine Aircraft Wing based in Newburgh, N.Y.

The families of those servicemembers killed in the Marines’ deadliest aviation crash in more than a decade have been notified as of Wednesday, James said. But the service declined to identify them publicly.

“Out of respect for the families, we will not release the names or specifics as of now,” the general said, adding they would be identified “in the next few days.”

Nonetheless, names of some of the Marines killed in the crash began circulating through news reports.

“He loved the Marine Corps,” Kevin Johnson told the cable news station. “He loved his job. He liked to fly.”

At least one additional crash victim had been identified as of Wednesday. Dan Baldassare, a Marine from Colts Neck, N.J., was killed in the crash, according to PIX 11 news. Ryan McGowan, a longtime friend of Baldassare’s said the Marine was among those killed, according to the news station.

“He was a patriot and all he wanted to do was serve our country,” McGowan told PIX 11. “Everyone had a lot of respect for Dan.”

Witness reported hearing low, rumbling explosions while the plane was still airborne. They told reporters that the aircraft spiraled down to the ground before smashing into the ground in two locations.

Andy Jones was working on his family’s catfish farm when he heard an explosion and saw the plane going down with an engine smoking. He said an intense fire broke out after it impacted the ground with enough force to nearly flatten the plane.

“You looked up and you saw the plane twirling around,” he said. “It was spinning down.”

Jones said by the time he and others reached the crash site, fires were burning too intensely to approach the wreckage.

Another catfish farmer, Will Nobile, said there were multiple explosions.

“It sounded like a big thunderstorm,” Nobile said. “Not one big explosion, but a couple of second-long explosions. ... A long, steady rumble is what it was.”