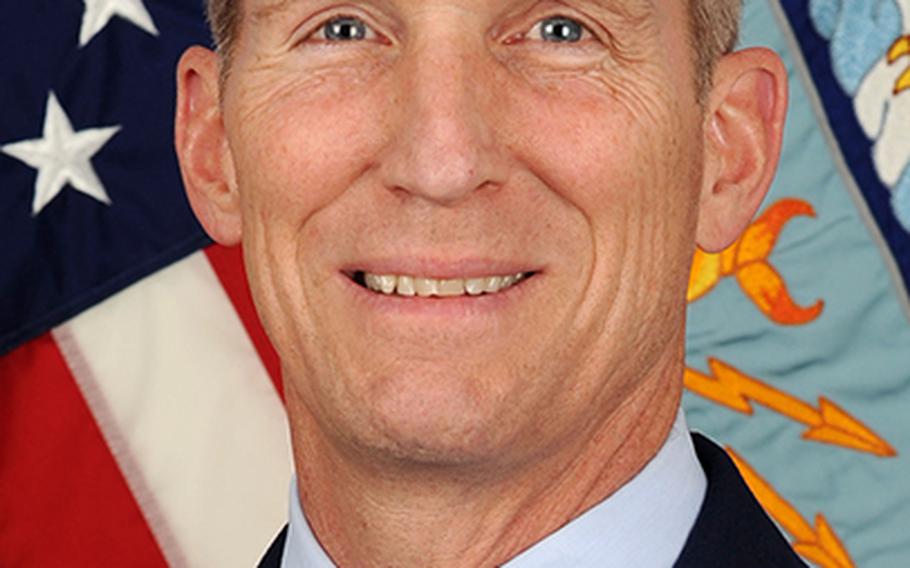 ARLINGTON, Va. — Even before the Air Force’s new F-35 “fifth-generation” fighter jet is combat-ready, the service is looking ahead to what comes next.

At an Air Force Association breakfast Tuesday, Gen. Michael Hostage, the head of Air Combat Command, said studies are underway to come up with a concept for a sixth-generation fighter plane.

The aircraft could be completely different than any of its predecessors, Hostage said at the meeting in Arlington, Virginia. “It isn’t necessarily another single-seat fighter.”

“Be thinking in terms of what is the capability that future technology will bring to us that will allow us to provide air dominance. … If that’s a single button on a keyboard that makes all the adversaries fall to the ground, I’m OK with that,” he said.

He raised the possibility that the new jet will be equipped with laser weapons, also known as “directed energy” capabilities.

“There is some amazing developments in that arena,” he said. “I think it holds great promise.”

The Air Force is aiming to put the sixth-generation fighter into the skies in the 2030s.

Hostage also sees the service’s training regimen fundamentally changing so that the most important combat training is done in simulators rather than in live exercises like the prestigious Red Flag.

With live-fire training, “I can’t turn on every bell and whistle on my new fifth-gen platforms,” Hostage explained. “A, they’re too destructive, and B, I don’t want the bad guys to know what I’m able to do. There’s a live virtual constructed arena out there that I think will provide us the path of the future. … If you look at the gaming industry today, the virtual reality industry, the virtual reality capability, we’re rapidly approaching the point in which you can’t tell whether you’re in a simulated environment or a real environment.”

In the not-too-distant future, he said, “I will do my highest-end training in a live virtual constructed environment.”

“Right now, I have an over-weighted fleet that’s really good at fighting in a permissive environment,” such as Afghanistan. “We need to resize and reapportion that fleet,” he said. “I need the ability to produce ISR in a contested environment. … The kind of platform that does that is … not a Predator, not a Reaper.”

Hostage said people need to temper their expectations about what drones will be able to do in a more lethal environment in which aircraft are more likely to be shot down.

“We have developed an expectation on the part of our joint partners that we’re going to produce that staring eye on the battlefield 24/7, and it’s not going to happen in a contested environment,” he said.

The general said the new planes will probably be able to gather intelligence only “on a periodic, episodic basis” in enemy airspace.

Given the anti-aircraft capabilities of potential adversaries, Hostage said stealthier planes will need to be used for close-air support missions.

“There are dozens of very significant anti-access potential arenas around the world,” he said. “And with the proliferation of relatively capable” surface-to-air missiles, “the contested space is changing. I could not send an A-10 into Syria. I know that they’d never come back.”

Earlier this month, the Pentagon put out a request for proposals for a long-range bomber that the Air Force wants to acquire. Hostage gave a preview of what it will be expected to do.

“We’re not going to build a platform that has everything on it such that it can go in there alone and unprotected,: he said. “… It will be part of a family of capabilities that, given a threat environment, will shape the members of the family that have to go in” on a bombing mission. “The concept of long-range strike is … we have to be able to hold at risk an adversary who thinks he’s got sanctuary” because of geography.

In remarks that will disappoint many fighter jocks, Hostage foresees a time when pilots will not soar into the wild blue yonder.

“I talk about providing that environment in which the human sitting in a box on the ground would have the same kinesthetic awareness of the aviator sitting in a platform in the middle of a combat environment,” Hostage said. “The day will come when I can produce that, and if that day comes, I am happy to stop flying manned aircraft.

“That day is not here yet … but I think it will happen.”