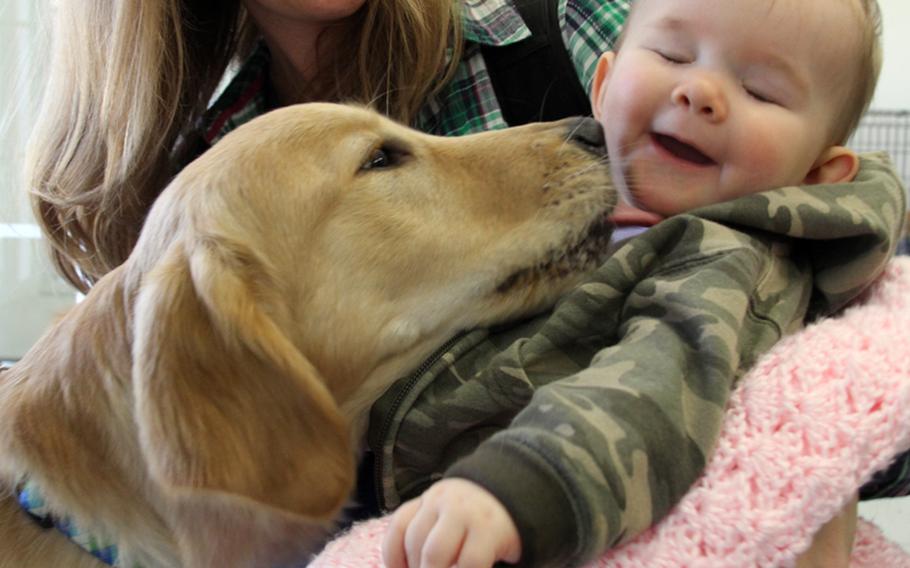 Abby, one of last year's litter of future service dogs, gets acquainted with Reagan Hook, the daughter of Capt. Torry and Sara Hook, at the Warrior Canine Connection's new George F. Nussbaum Puppy Enrichment Center in Brookeville, Md., Feb. 15, 2013. Abby is being trained by Jacob Hershorin. (Joe Gromelski/Stars and Stripes)

BROOKEVILLE, Md. — Last fall, Rick Yount and his wife, Molly Morelli, were trying to figure out how to provide better living space for the newest litter of puppies at their home and Warrior Canine Connection headquarters in rural Maryland.

Meanwhile, a woman in New Jersey wrote a letter that would lead to Friday's opening of the spacious George F. Nussbaum Puppy Enrichment Center.

"My wish is that you and Home Depot will consider donating any construction supplies, materials or man hours that would assist them in completing this renovation," she wrote. "I know this is a lot to ask from a stranger, but I believe in the gift of giving, and with your help we could give our veterans who have given up everything for us and our country what they truly deserve. I ask you to please consider this proposal with all your heart."

What followed was a team effort by Home Depot and a couple dozen of its employees who converted a Brookeville garage into a place where future military service dogs can frolic indoors in winter, and where the many volunteers who stop by to hug, help care for and be entertained by the furry centers of attention can move around more freely.

Yount's reaction to the effort was "hard to define in words. It was pinching yourself. This has been an initiative based on faith that the right things will happen at the right time, and it really solidified that faith that whenever you have a need, there are out there who want to help, like the people at Home Depot. They stepped up and far exceeded anything that we could imagine."

Bobbitt "immediately felt like we were compelled to take action ... This was the right thing to do. It was in line with our values as a company. We went to work. We had over 25 Home Depot volunteers and vendors participate in what you see today. It was simply amazing."

The crowd at Friday's event spoke to the success of the program, which began about six years ago when Yount, a longtime social worker, noticed that dogs can be a big help to people dealing with trauma. There were mental-health professionals, active-duty servicemembers who have seen the results of service-dog therapy first-hand, and Home Depot employees whose labor made it all possible. And there was the latest group of puppies: Five Labrador retrievers from Misty's litter, and one Golden retriever brought in from New Hampshire.

Last year's group of six puppies became stars on the Internet, and a couple of them — much bigger than they were a few months ago — were there on Friday, too. Abby, being trained by Jacob Hershorin before her placement with a Wounded Warrior about a year and a half from now, introduced herself to visitors young and old. Hershorin, a psychometrist at the National Intrepid Center of Excellence in Bethesda, Md., reported that training is going well, as did Capt. Lisa Raimondo, who is working with Levi, the only male in last year's litter.

"You wouldn't have thought that some little bitty Golden retriever could change your life the way he has," Raimondo said.

A basic goal of the Warrior Canine Connection is to have servicemembers suffering from PTSD train the dogs before they're given permanent homes with Wounded Warriors.

"Somebody (may be) socially isolated, a little depressed, anxious," said Matt St. Laurent, an occupational therapist at Walter Reed National Military Medical Center. "But you have that dog as your mission, you have to accomplish that mission. The focus is on the animal, kind of taking you away from your injury. It's a great way to help improve someone's ability to function and get back out into society."

As the program grows, the process of preparing the dogs for their important roles in the lives of veterans is becoming more scientific.

"Why do dogs make people feel better? We're looking at the brain chemical oxytocin, which we know goes up when people feel good, and goes up when people interact with animals," said retired Army Col. Elspeth Cameron Ritchie, the chief clinical officer for the District of Columbia's Department of Mental Health. "So we're learning more about the science, as well as learning about the best way to train the animals."

Capt. Robert Koffman, the deputy director for clinical operations at NICoE who was honored as the Navy's top psychiatrist in 2008, said he became convinced of canines' therapeutic value during multiple deployments to Iraq.

"So many servicemembers (downrange) adopted feral animals that the commanding general actually issued General Order No. 1: Because of the fear of rabies, no one will have an animal," Koffman recalled. "Well, that didn't stop anyone. I saw more puppies in Alice packs and more feral dogs in tanks. Everywhere you went, people had adopted dogs. Anecdotally, they just seemed to do better. They didn't necessarily need a traveling shrink, they just needed to have a connection with something warm and fuzzy, and something that they could take care of."

The puppies' new home was officially named in honor of retired Army Col. George Nussbaum, who passed away last month. Nussbaum, who served in the Nurse Corps, was a key player in the design of the National Intrepid Center of Excellence at Walter Reed in Bethesda, Md., and was a strong supporter of using service dogs to help servicemembers deal with combat stress.

Nussbaum "had the vision of not only helping Rick establish this facility, but creating a welcome mat for dogs at the NICOE," Koffman said. "Dogs have really served servicemembers since the Continental Army, because the bond and the relationship is so strong. As a psychotherapist, I've seen amazing results. This special bond was something Col. Nussbaum understood perhaps better than anybody."