From the bottom up, Army focusing on trust, relationships 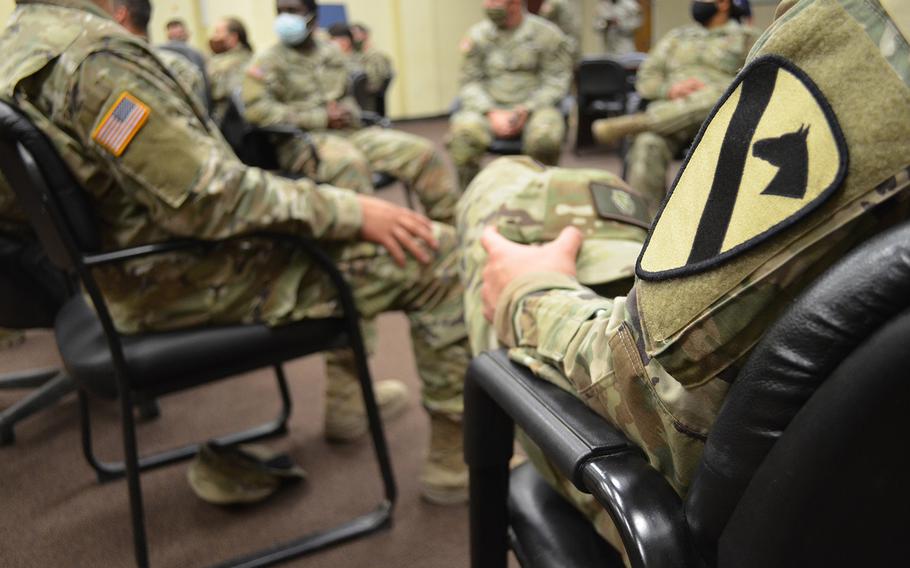 Buy Photo
Fort Hood soldiers from the 1st Cavalry Division's 2nd Battalion, 12th Cavalry Regiment participate Oct. 20, 2020, in a class to discuss behavioral health and stress management during a week of training that aims to rebuild trust among soldiers and leaders by taking a holistic approach. (Rose L. Thayer/Stars and Stripes)

Buy Photo
Fort Hood soldiers from the 1st Cavalry Division's 2nd Battalion, 12th Cavalry Regiment participate Oct. 20, 2020, in a class to discuss behavioral health and stress management during a week of training that aims to rebuild trust among soldiers and leaders by taking a holistic approach. (Rose L. Thayer/Stars and Stripes) 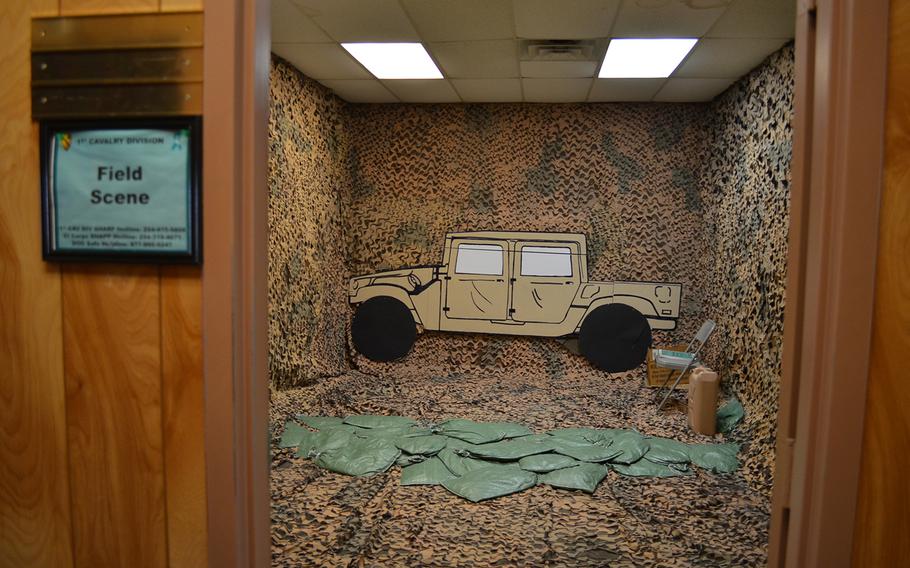 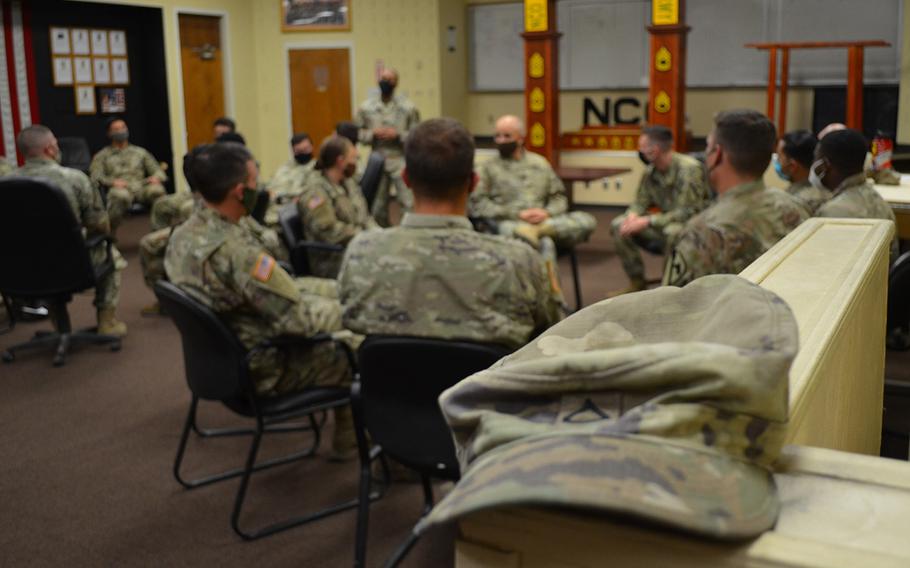 Buy Photo
At the SHARP 360 facility, Fort Hood soldiers undergo interactive training to learn how to identify sexual assault and harassment and how to intervene. Sexual assault response coordinators within the 1st Cavalry Division created the facility in April 2018 as an alternative to the standard PowerPoint presentation and said they have received positive feedback from the soldiers who participate. (Rose L. Thayer/Stars and Stripes)

Buy Photo
Sgt. 1st Class Crystal Basham, the lead sexual assault response coordinator for the 1st Cavalry Division at Fort Hood, Texas, stands in a mock bar where soldiers act out scenarios to learn how to identify sexual assault and harassment and then intervene safely. (Rose L. Thayer/Stars and Stripes) 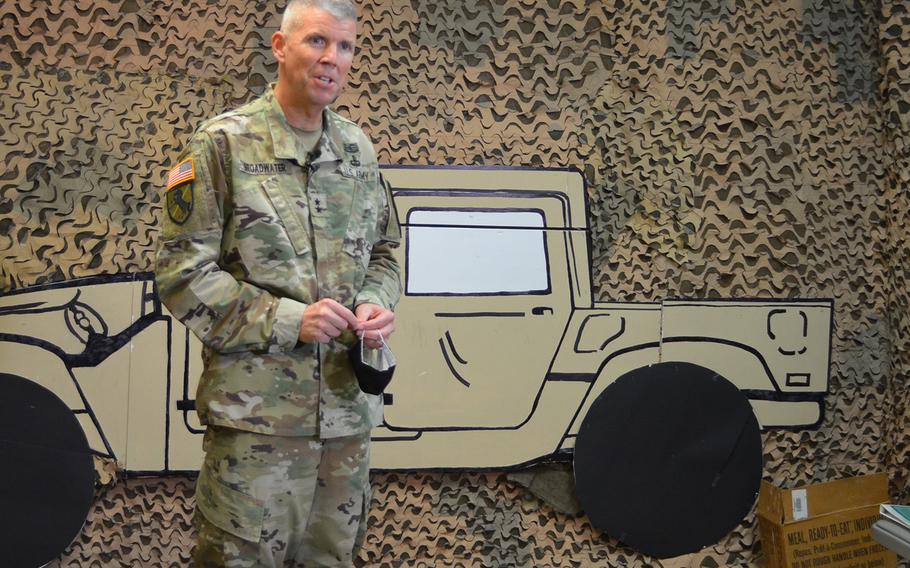 Buy Photo
Maj. Gen. Jeff Broadwater, commander of the 1st Cavalry Division, said that each of the division’s 29 battalions will visit the SHARP 360 facility this year to undergo interactive training to learn to identify and prevent sexual assault and harassment. “We’re all getting better and identifying problems, to address those problems and move forward,” he said. (Rose L. Thayer/Stars and Stripes)

FORT HOOD, Texas – The training begins with a bar scene. Two male soldiers act out a night of celebrating a promotion, but one soldier is feeding shots to the other while just sipping a beer. The sober soldier begins getting closer to his drunken friend, occasionally putting a hand on him, leaning across, touching more than normal.

Sgt. 1st Class Crystal Basham, the lead sexual assault response coordinator for the 1st Cavalry Division, pauses the scene to ask whether anyone would step up and stop this. What if the drunken soldier were a woman?

The scenario is one of five presented to small groups of soldiers at Fort Hood, Texas, at the 1st Cavalry Division’s SHARP 360 facility — an interactive training center opened in April 2018 as an alternative to the standard training mandated by the Army’s Sexual Harassment/Assault Response and Prevention program, known as SHARP.

Basham and her team use real-life examples of sexual harassment and assault, and role-play how to intervene.

In the bar scene, “we focus on male-on-male assault, because when we ask males, ‘What do you do on a daily basis to ensure you’re not sexually assaulted?’ we hear them say they don’t really think about it,” Basham said. Most male soldiers say they provide the women in their lives a list of ways to protect themselves. “We ask, ‘Why don’t you do this for yourself?’ ”

This lesson is reinforced during scenes that play out in a mock barracks room, gym, office and field training. Soldiers who attend the training tell her it beats a PowerPoint presentation.

“They get same information, but it’s the delivery of it,” Basham said. “It gives them an opportunity to really see it.”

“You have more interactions and it leads to better discussions and better knowledge of certain situations that we want to be aware of as we go,” he said. “We’re all getting better and identifying problems, to address those problems and move forward.”

The 360 facility, built in an abandoned building on the west side of the base, is just one part of the training made mandatory under the division’s Operation Pegasus Strength. The trust-building initiative among soldiers and leaders takes a holistic approach to improving soldiers’ well-being. It aims to remove three “corrosives” that destroy trust – sexual assault and harassment; extremism and racism; and suicide, Broadwater said when the training began last month.

“We were told, ‘Soldiers look to the left and right. Look front and behind. That’s what a predator looks like. Look again, that’s what a victim looks like,’ ” she recalled. “So you don’t really know. We’re all wearing the same uniform, so it’s hard to tell.”

Her takeaway: It’s important to always be aware of what’s going on.

“There’s no such thing as an innocent bystander. If you feel like something’s wrong or see something wrong, it’s better to intervene and be wrong rather than not to intervene. It’s important to take care of everyone’s safety,” Marin said. “That hit me. It’s something I will definitely take more seriously. It’s really unfortunate that some events happened and could have been stopped by something as simple as saying, ‘Hey, what are you doing?’ ”

The facility also has two rooms designed to reinforce what soldiers learn — a quiz game and an escape-room style game where soldiers learn about resources on base in exchange for keys to free Spc. Teddy, a human-size teddy bear dressed in an Army combat uniform.

Before the year’s end, each of the 29 battalions in the division will take one week to focus on holistic health and trust, with at least half a day at the SHARP 360 facility. The week includes a mix of physical fitness events and classes. Some attempt to destigmatize the need for behavioral health resources, and others promote nutrition and stress management and articulate resources available for everything from financial assistance to discrimination reports.

Pegasus Strength is nested in the same ideas as a weeklong trust-building initiative held last month within the division’s higher command, III Corps. Soon the corps will expand that initiative under the name Operation People First to the other three divisions under its command.

“We do have some significant issues to tackle here at Fort Hood,” Maj. Gen. John Richardson IV said during a recent phone interview. A common denominator of these issues was a “trust deficit that has built over time between soldiers and the chain of command.”

Initiatives and information from Army Forces Command and the Pentagon show that these issues aren’t limited to Fort Hood. Across the formation, rates of suicide have climbed during the coronavirus pandemic, and soldiers and families continue to feel neglected when it comes to safe living conditions in base housing and the barracks.

Army leaders said this month that they have seen about a 30% jump in the number of active-duty suicides this year, and the increased numbers coincide with the start of the coronavirus pandemic.

Chief of Staff of the Army Gen. James McConville described the support system that the Army hopes to build around each soldier as the “golden triangle.” Three points – a leader, family and friends — surround a soldier to provide a greater support system.

“These are difficult times and leaders need to think through how we are taking care of our families during this environment,” McConville said last week during the Association of the U.S. Army annual conference. “We have single [and] dual working parents. We need to take a hard look at how we are supporting our soldiers.”

The weeklong conference also included the announcement of huge funding infusions for base living quarters.

Nearly $9 billion will flow into barracks projects over the next 10 years, starting with $780 million this year, McConville said.

“We want to make sure we have quality barracks, and we are putting billions of dollars into those facilities to make sure that we have that quality,” he said. “It is going to take some time, but we are committed to making that happen.”

Marin, who oversees three soldiers, said she has taken these lessons to heart. She carries them with others from the strong leadership she said she has had during her time in the Army. When things get difficult, she tells her soldiers they will adapt and overcome. Then it will get easier.

“Throughout the line I’ve had so many great [noncommissioned officers] and officers. They taught me to exhaust every avenue before giving up on something. I always treat my soldiers like they are real people. If they need help, I’m always right there helping them out. I won’t stop until I figure out any way I can help them, because that’s the leadership I got,” Marin said. “It’s only fair that I give that to future leaders.”