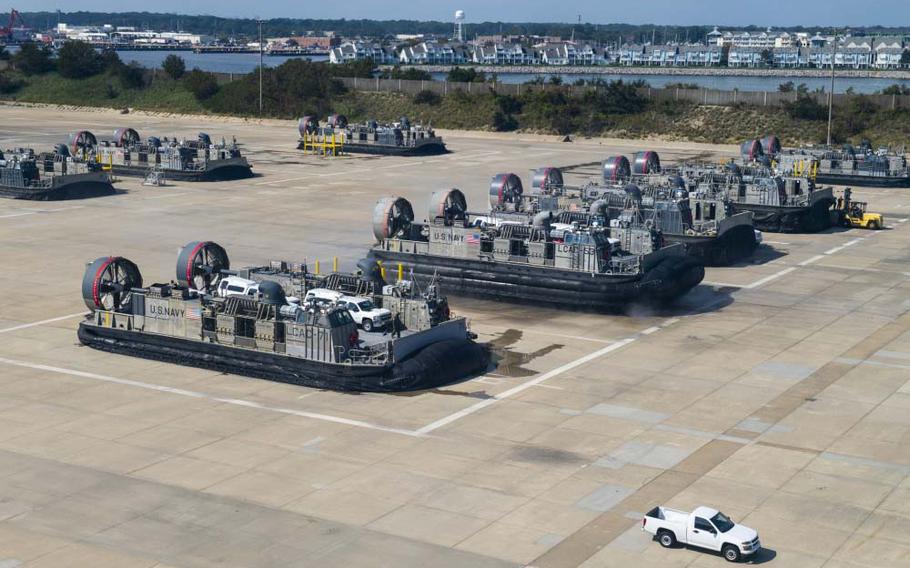 Service members from Joint Task Force Civil Support and Assault Craft Unit 4 move vehicles from Joint Expeditionary Base Little Creek-Fort Story to Fort Eustis on Sept. 16, 2019, during a mobile exercise. A sailor assigned to Assault Craft Unit 4 based at Joint Expeditionary Base Little Creek in Virginia Beach is the fourth sailor to die in February from the coronavirus, the Navy announced Tuesday. (Corbin Shea/U.S. Navy)

WASHINGTON — A Virginia-based sailor is the fourth sailor to die in February from the coronavirus, the Navy announced Tuesday.

The sailor was assigned to Assault Craft Unit 4 based at Joint Expeditionary Base Little Creek in Virginia Beach, according to a statement by Expeditionary Strike Group 2. The individual had tested positive for the coronavirus Friday and was admitted to Sentara Leigh Hospital in Norfolk on Saturday.

The sailor died Monday due to complications related to the virus, according to the Navy statement.

Other sailors who had been in contact with the individual have been notified and are taking precautions, the Navy said.

The sailor’s name is being withheld until 24 hours after next-of-kin notification is complete.

The individual’s unit operates air-cushioned landing craft, which are high-speed vehicles that transport people, weapons and equipment from ship to shore, according to the Navy.

The sailor is the fifth one to die since the pandemic began nearly a year ago. The sailor’s death increases the number of service members who have died due to the virus to 23.

As of Monday, the military has had 159,546 coronavirus cases, 1,390 personnel hospitalized and 116,869 who have recovered, according to the Defense Department.

As of Tuesday, the United States has had 28.2 million cases of the coronavirus and 502,227 people have died, according to Johns Hopkins University.