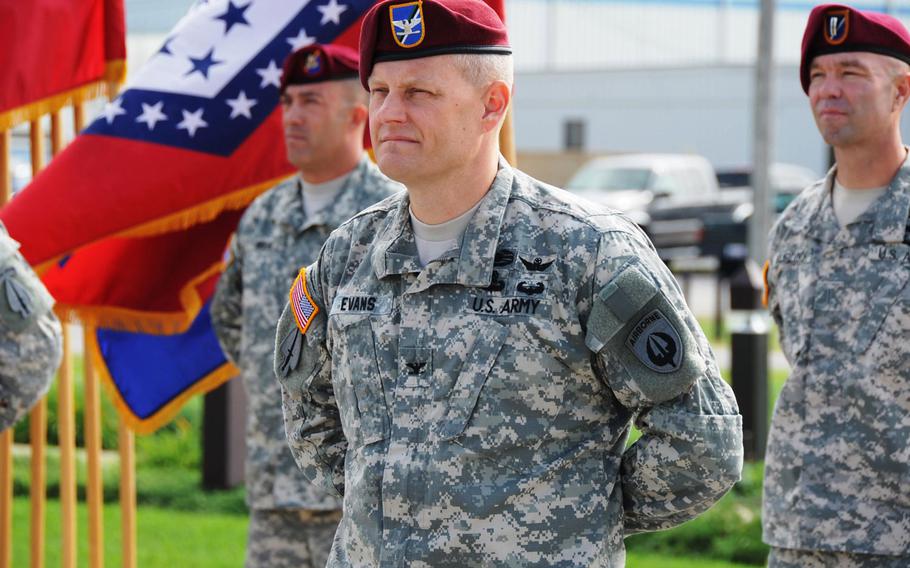 Maj. Gen. Erik C. Peterson has spent his career in the Army aviation.

For most of his more than 30-year career, he's flown helicopters in support of both conventional and special operations forces.

But the general's biggest impact as of late hasn't come from a pilot seat.

At the helm of U.S. Army Special Operations Aviation Command, Peterson operated with a "subtle touch on the controls," and a nuanced understanding of force management and readiness issues, officials said.

That's allowed the relatively small command to have a big impact on U.S. military affairs.

On Tuesday, the Fort Bragg and special operations community thanked Peterson for those efforts as they welcomed his replacement, Brig. Gen. John R. Evans Jr., during a ceremony at Meadows Field.

Peterson, who was promoted before the ceremony, was also awarded the Army Distinguished Service Medal for his service in command.

He praised Peterson's professionalism, drive and leadership and credited him with helping to modernize an aging aircraft fleet while developing new capabilities for the force.

At the same time, Tovo said Peterson fought for the necessary resources to keep aircraft flying and crews proficient even as they maintained a high operational tempo with constant deployments.

The Fort Bragg-based command has units spread across the country, with planes such as the CASA 212, C27J Spartan and C-12C based at Pope Field and a fleet of specialized helicopters, including MH-60 and UH-60 Black Hawk variants, MH-47 Chinook, and AH-6M and UH-6M Little Bird variants based at Hunter Army Airfield in Georgia, Fort Campbell in Kentucky and Joint Base Lewis-McChord in Washington. Its units include the USASOC Flight Company, 160th Special Operations Aviation Regiment, Special Operations Aviation Training Battalion, Systems Integration Management Office and Technology Applications Program Office.

Peterson said roughly 4,000 soldiers and civilians belong to the command, and support tens of thousands of special operations teammates.

Of the roughly 4,500 Army special operators currently deployed, about 300 belong to the aviation command, he said.

And often, they are tasked with carrying soldiers to or from dangerous missions without fanfare or recognition.

The outgoing commander said it was an honor and privilege to serve with those soldiers and civilians. He said he would be forever humbled by their unwavering commitment.

Peterson, who will next serve in the U.S. Army Office of the Deputy Chief of Staff in Washington, gave an enthusiastic endorsement to Evans, whom he called a proven and trusted leader.

Tovo, too, praised Evans as he welcomed the general "back to the special operations aviation community."

Evans had most recently served as a deputy commanding general of the 2nd Infantry Division in South Korea.

Evans has led at every level of that organization, to include commanding the regiment between 2012 and 2014.

Tovo said Evans has a "storied career in the 160th," and shows that, with Army special operations, "our leadership bench is very deep."

Evans said he was up to the challenge, praising those he now leads.

It's not superior aircraft and technology that sets the unit apart, he said, but an amazing team of soldiers and civilians who consistently punch above their weight class.