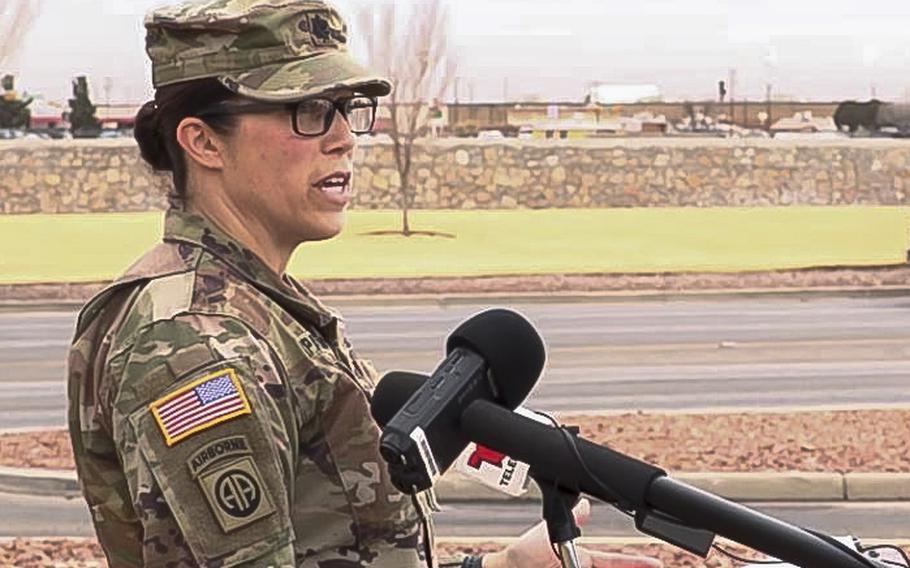 A video screen grab shows Lt. Col. Allie Payne, a Fort Bliss spokesperson, on Friday Jan. 29, 2021, giving an update on the 11 soldiers from the base who were injured after ingesting an unknown substance during a field training exercise. ()

The soldiers were participating in a training exercise as part of the 11th Air Defense Artillery Brigade of the 32nd Army Air and Missile Defense Command, when they drank the potentially deadly substance, said Lt. Col. Allie Payne, spokeswoman for Fort Bliss. The unit was preparing to return from the McGregor Training Complex on the final day of the 10-day training exercise when the soldiers became ill.

All 11 soldiers were hospitalized Thursday afternoon and more than 24 hours after the incident, two soldiers remained seriously ill in the intensive care unit at the base’s William Beaumont Army Medical Center. Up to four of the soldiers were expected to be released Friday evening, said Col. Shawna Scully, deputy commander of medical services at the hospital.

“Exactly what was happening on that day that led to the soldiers ingesting that material is all under investigation," Payne said. “We do want to understand what happened that day.”

An administrative investigation and an investigation from the Army Criminal Investigation Command are underway. For that reason, Payne declined to release details on how the antifreeze was presented or packaged at the time it was consumed.

Drinking alcohol while on duty or during field training exercises is not allowed, she said.

The injured soldiers included one warrant officer, two noncommissioned officers and eight enlisted members. No other soldiers were believed to be involved, Payne said.

“We’re very glad those soldiers got the treatment they needed,” she said. “Our primary concern remains the well-being of our soldiers, our families, and the unit.”

Antifreeze, also referred to as ethylene glycol, is dangerous, even in small amounts. It can immediately cause kidney failure or large doses can lead to organ failure, Scully said. Other symptoms include nausea, agitation and confusion.

Doctors treat antifreeze consumption by administering medication that binds the substance together to clear it from the body, Scully said. In extreme cases clearance is done using a dialysis machine.

The first soldier entered the emergency room Thursday afternoon with symptoms, followed shortly by a second, she said. The medical leadership on base then asked all members of the battalion conducting training be taken to the hospital immediately for evaluation.

All 11 soldiers admitted to the hospital “have shown signs of significant improvement,” Scully said. One soldier who required a ventilator has since been removed from the support.

“All others are doing incredibly well,” she said.