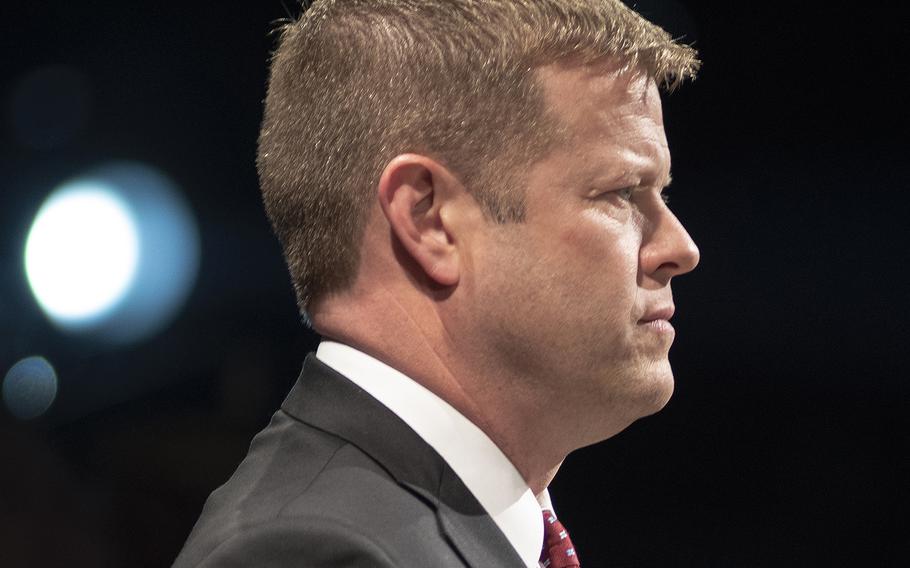 Under Secretary of the Army Ryan McCarthy stands for the national anthem during an event at Fort Myer-Henderson, Va., on Wednesday June 19, 2019. (Emma Swislow/Stars and Stripes)

WASHINGTON — With Army Secretary Mark Esper poised to become the acting defense secretary on Monday, his top deputy Ryan McCarthy will slide into the role as the Army’s top civilian on a temporary basis, defense officials said Friday.

It will mark the second time in about two years that McCarthy, the undersecretary of the Army and a former infantry officer, will serve as the Army secretary on a non-permanent basis. McCarthy served as acting Army secretary from the time he was unanimously confirmed by the Senate to serve as the service’s No. 2 civilian on Aug. 1, 2017 until Esper was sworn into office on Nov. 16 of that year.

It was not clear Friday whether McCarthy would receive the formal nomination from President Donald Trump to fill the Army secretary job permanently, according to two defense officials who also confirmed he would fill the top civilian job role for now. Esper is expected to receive the formal nomination to become permanent defense secretary from Trump, but it was not clear when that might occur.

Also complicating the matter, Esper cannot serve as acting defense secretary while his nomination is open, due to a limitation within the 1998 Federal Vacancies Act. That means if Trump sends Esper’s nomination to the Senate, he would have to work in a different position — perhaps back as Army secretary — until confirmed.

The White House announced May 9 that Trump intended to nominate Shanahan for the permanent defense secretary post, but the administration never formally sent that nomination to the Senate. Shanahan announced Tuesday that he was withdrawing from consideration amid reports of past domestic violence in his family.

As the Army’s top civilian, McCarthy is expected to continue, as Esper had, to focus the service on preparing for a potential conflict with a major military power, namely Russia or China. The two have worked closely together to slash underperforming programs and push the service to develop modernized weapons systems more quickly. Their focus has largely centered on developing long-range artillery capabilities, a next generation combat vehicle, new helicopter programs, and better cyber and communications networks.

McCarthy served in the Army from 1997 to 2002, leading a platoon with the elite 75th Ranger Regiment in the opening days of the war in Afghanistan. He left the service as a captain and later spent time working as a staffer on Capitol Hill, at the Pentagon and later as an executive at Lockheed Martin, the massive defense contractor.

He most recently served as Lockheed’s vice president of sustainment for the F-35 Lightning II fighter jet program.

McCarthy also served at the Pentagon in former Defense Secretary Robert Gates’ office, where officials said he was the “right hand man” for the 22nd defense secretary, who served under former Presidents George W. Bush and Barrack Obama.