Former Army captain, now a nurse, on the pandemic in LA: 'I haven’t worked this hard since my days in Iraq' 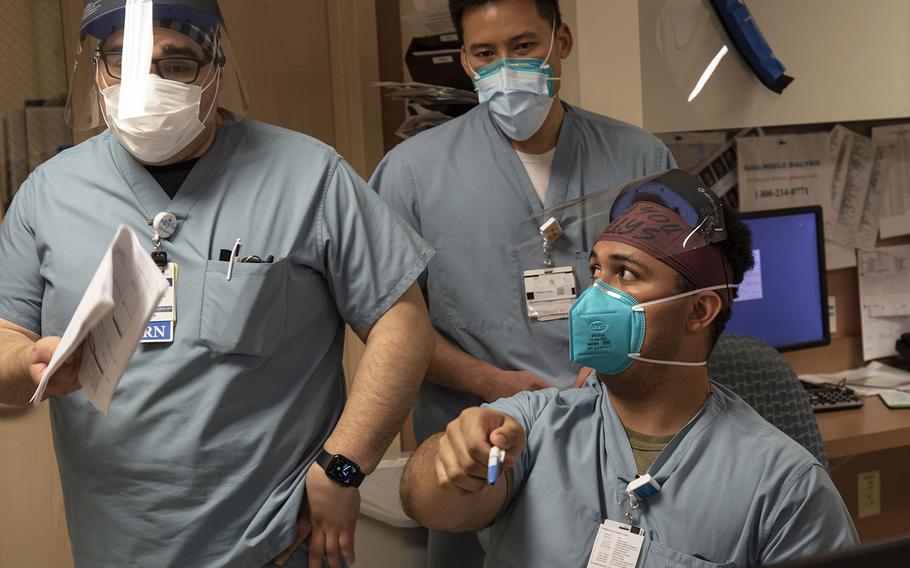 Wesley Willard, a former Army captain, serves as the manager of nurses for the intensive care unit at Adventist Health White Memorial Hospital in Los Angeles. Since Thanksgiving, he said his unit has been overwhelmed with coronavirus patients, though a deployment of military medical providers this month has brought some reprieve to his staff. (Garrison Waites/U.S. Army) 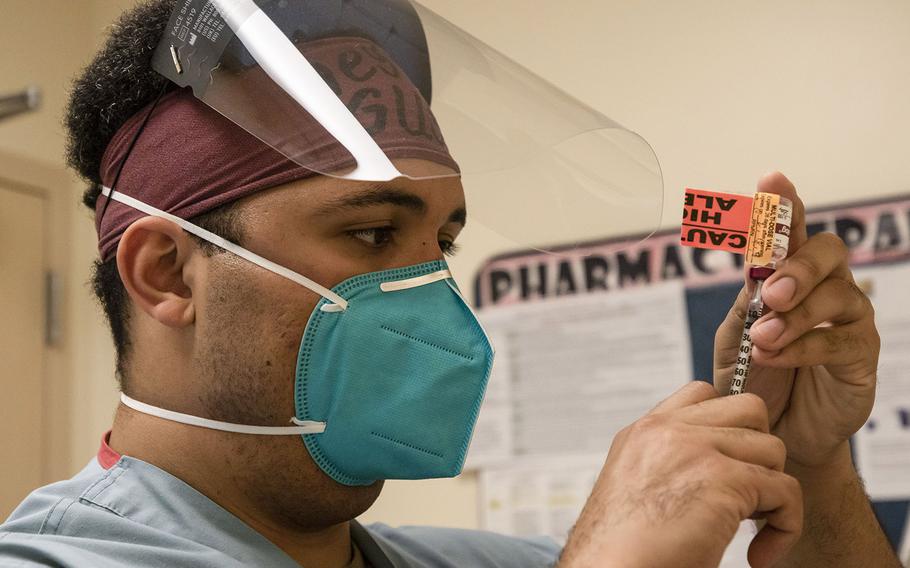 Army 1st Lt. Fernando Echeona draws insulin for coronavirus patients during his shift in a telemetry department at the Adventist Health White Memorial Hospital in Los Angeles on Jan. 22, 2021. He is one of about 185 military medical providers deployed to California to work in civilian hospitals overwhelmed with coronavirus patients. (Garrison Waites/U.S. Army)

AUSTIN, Texas – The surge of patients at Adventist Health White Memorial Hospital in Los Angeles after Thanksgiving reminded Wesley Willard of his deployment to Iraq in 2004.

Willard, an intensive care unit nurse manager and a former Army infantry captain, said the hospital was running out of beds and ICU nurses were stretched thin.

“My military training and experience in combat have definitely come to play here,” Willard said of his time in Iraq, where he managed security outside of the prison at Abu Ghraib.

No longer leading a platoon, he manages 120 nurses.

“I can tell you that I haven’t worked this hard since my days in Iraq,” he said. The ICU nurses would “finish their 12-hour shift and then work an additional eight to 10 hours.”

At one point in early January, Willard said the situation was so difficult, the hospital asked local county officials for a reprieve from incoming ambulances. All they could offer was a three-hour break, he said.

California requested help from the Federal Emergency Management Agency for White Memorial and five facilities throughout the state. A combined unit of 185 Army and Air Force medical personnel began arriving Jan. 7 to backfill nurses, doctors and respiratory therapists and help with the high volumes of patients.

“Having these military partners come in and pick up and basically integrate themselves was amazing. It allowed our nurses to have a bit of a break,” Willard said. “They came in at a point where we were overwhelmed.”

Outside of Los Angeles, troops are working in Lodi, Fresno, Moreno Valley and Torrance in California. Another 40 who deployed in late December will end their mission in Colton and Stockton on Friday and return to their duty stations, according to the Army North, the command tasked with overseeing the deployments.

In total, about 350 troops are deployed in four states on similar missions. Even as about 1 million Americans a day receive the coronavirus vaccine, hospitals throughout the country continue to grapple with caring for patients fighting the virus, sending some hospitals to the brink of capacity. With more than 168,620 cases confirmed nationwide Friday, new cases are slowly coming down from a peak after the holiday season, according to data from Johns Hopkins University.

“Getting adjusted to how acute the need was while we were in San Antonio, how severe the patients’ conditions were, it very well prepared me to be [in L.A.],” Echeona said.

Working in a military facility, he does treat civilians, but it’s rare to get people as sick as those in the general population, he said.

“The civilians working here have been working extremely hard. It’s hard times they are going through, but they’ve done amazing. It’s an honor to be here working with them,” Echeona said.

Though the days in these units can be difficult and emotionally exhausting, Echeona said he and fellow service members picked up a habit while deployed in Texas that has helped them stay positive. At the end of each day, they share with each other three good things that happened.

“No matter how busy or how interesting it got, those are some of things that really help out,” he said.

Echeona was assigned to a telemetry unit, which holds patients who are just below the level of an intensive care unit. Many patients arrive in his care after weeks of intensive care, returning from the brink of death.

For many patients, nurses have become their only connection to another human or the outside because visits are limited to when someone is expected to die.

“My nurses, Lt. Echeona as well, are really a witness in the [coronavirus] journey of the patient, especially the ones not able to get out of the hospital. They’re here for a month, sometimes more, going to different units,” Willard said. “If they succumb to [coronavirus], the nurses are there. They’re the last touch and the last word. They’re setting up family visits, setting up video visitation.”

As the holiday surge seems to be slowing, Willard said his unit’s patient load remains high, but it is decreasing. During a conversation Monday, there were about 30 patients in the ICU, many of them intubated or extremely sick with coronavirus, he said.

“We’re not out of the woods,” Willard said.

Outside of California, about 40 Army reservists are deployed to Yuma, Ariz., and another 50 troops from the Army Reserve and Navy are supporting Navajo Nation medical facilities in Arizona and New Mexico.

“This is truly a joint effort and I am confident that collectively our service members are up to the task,” said Lt. Gen. Laura Richardson, commander of Army North.