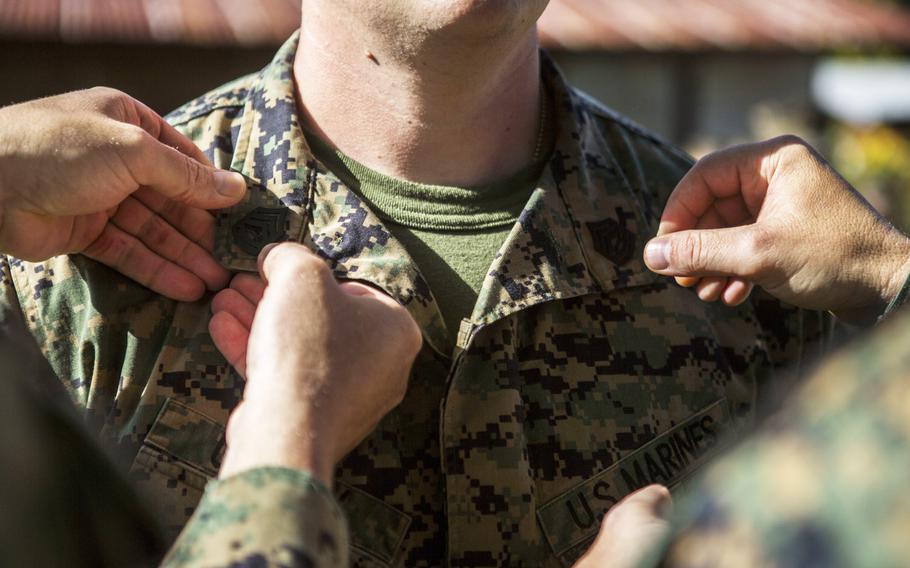 A Marine is promoted to the rank of Gunnery Sergeant on Soto Cano Air Base, Honduras, Aug. 1, 2015. (Abraham Lopez/U.S. Marine Corps)

Defense Secretary Ashton Carter next month will be presented with a package of detailed proposals for reshaping military and defense civilian pays, promotions and quality of life, all of which strive to capture a “Force of the Future” vision that Carter laid out in a speech last March.

The draft proposals, reviewed over the past week by the services’ assistant secretaries for manpower, and by personnel chiefs of Army, Navy, Air Force and Marine Corps, are wide ranging, innovative and many will be controversial.

For example, to shape a more talented military, the Force of the Future package would ask Congress to end the “up or out” promotion and retention systems adopted after World War II. Designed then to ensure youth and vigor, up-or-out today fails to allow forces reliant on technology enough career flexibility and opportunities for personal growth.

“Now, as then, major personnel decisions – including promotion, resident professional military education, involuntary separation and career field designation – occur in batches determined by the year in which an officer enters service,” says the package advising sweeping change. “Failure to complete all the tasks and assignments deemed desirable by the promotion board in the allotted time often results in failure of selection.”

The result is “unnecessary loss of talent due to the arbitrary nature of career timing” and “tremendous opportunity costs for the department and the nation.” A more flexible personnel system would encourage more officers to get advanced civilian schooling and accept non-traditional assignments that broaden their experience beyond “standardized career paths.” The services also could better match talent with positions, and not be so handcuffed by the calendar of selection boards for promotion.

“To this day, rank and years of service are the sole determinants of basic pay, virtually assuring that most service members are either over- or under-compensated for the productivity associated with a person’s talents,” the package argues. It calls this “equity-based approach” to management and compensation “obsolete” and says that setting pay “for minimum skill levels across large populations…elevates quantity over quality.”

The package suggests two pay table changes. One would raise pay for officers with six to eight years’ service, reasoning that at that point they are more marketable to outside employers. Dampened would be basic pay for officers with three and four years service because most are still fulfilling initial service obligations and therefore aren’t as marketable.

New authority would be sought from Congress for services to amend their basic pay table for up to five critical specialties “to achieve near-market clearing wages” and compete better with outside employers. Also, it proposes offering special and incentive pays to individuals “as opposed to the current requirement to offer such pay only to different classes or groupings of service members.”

Another initiative would allow services to establish “technical career tracks” for up to five officer and enlisted job specialties, recognizing that some members with critical skills don’t want command or to supervise others, and yet should be allow full careers as technical experts.

Carter also wants a more diverse force and that goal is reflected in the package. One initiative would require that 25 percent of members on selection and promotion boards be women or minorities. And for at least two years, the services would test a race-and-gender-blind officer promotion process by removing names, photos and pronouns from promotion packets and service records that selection boards review.

Following Navy’s lead, parental leave for all services, and also for Defense civilian employees, would expand to 18 weeks. Any new parent on active duty or employed by DoD would qualify after a birth or adoption. Mothers could accrue 18 weeks’ leave per child; fathers a total of 18 weeks over careers.

Though 144,000 children are born to or adopted by military members annually, officials see parental leave expansion as largely cost neutral. But they concede the possibility that enlisted members and civilian employees, on leaving service, would sell back more normal leave not taken, adding roughly $475 million to personnel costs over the first five years.

To improve quality of life for mothers in service, another proposal would prohibit their deployment within a year of childbirth or adoption, and also require that “mothers’ rooms” be established at every command so nursing moms can pump breast milk during workdays in comfort and privacy.

Another proposal would expand TRICARE coverage of fertility treatments including oocyte and sperm preservation, intrauterine insemination, in vitro fertilization and advanced reproductive technology.

Some treatments cost a few thousand dollars and others as much as $15,000. TRICARE doesn’t cover now. “Yet for frequently deployed service members and their spouses, elective oocyte and sperm cryopreservation promises the ability to have a family at a later time,” the package notes.

A total of 29 proposals are under review with 11 aimed at reforming how DoD civilians, particularly those with critical or highly technical skills, are recruited, promoted, paid and retained.

Carter tapped Brad R. Carson, acting under secretary of defense for personnel and readiness, to direct his Force of the Future initiative. In an August 3 memo to the services, Carson said the proposals “are the first fruits” of the initiative, shaped by inter-departmental working groups.

He asked service leaders to comment and suggest edits by August 13. Any comments shared would be in the final report to Carter “without gloss or editing,” Carson promised. But he also maintained that personnel systems used to manage their workforces today “must change if we are to adequately keep pace with our increasing demands and with the private sector.”

Carter will review and make final decisions on the package in time for at least some reforms and new authorities to be included the defense budget request for fiscal 2017 to be delivered to Capitol Hill early next year.

The draft package acknowledges the difficulty of getting major personnel reforms enacted before President Obama leaves office Jan. 20, 2017. So to help ensure survival of any initiatives enacted, implemented or still moving through Congress, the package seeks to create a new position of Deputy Assistant Secretary of Defense for Future Force Implementation to provide continual oversight. That position would sunset by October 2020.