For naval officer and wife, one last dance before deployment 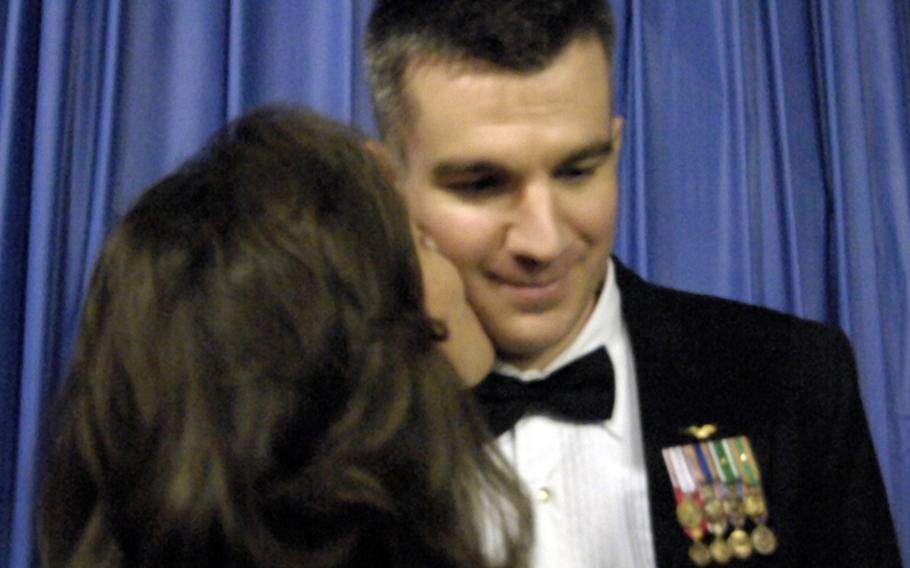 Navy Lt. Cmdr. Mike Greentree gets a kiss from his wife, Vivian. (Meredith Tibbetts/Stars and Stripes)

WASHINGTON, D.C. — For at least one couple, Monday's presidential inaugural balls meant a very special night out — as well as one last date for a while.

With Navy Lt. Cmdr. Mike Greentree having been deployed four times before in his 12-year career, his wife, Vivian Greentree, has been to her share of military balls without a date. And with his fifth deployment coming up next week, Vivian Greentree was savoring every minute of the Commander in Chief’s Ball with her husband on her arm.

“This time tonight, it’s pretty special,” Vivian Greentree said. “He’s leaving again next week, but he’s here tonight. We would’ve been happy to go out for pizza without our children, but this is kind of amazing.”

Mike Greentree will deploy to Bahrain for a year.

“I bet there’s 500 other couples [here] who are like a month away from deployment,” said Vivian Greentree, who works for a national military family support group. “So something like this, it’s important for everyone and it’s a lovely evening out. It’s extra special for those couples. I know it is for us.”

The ball, which honors the troops, also gave the Greentrees a chance to be around other military families on a festive occasion.

“We’re all in the same boat together,” Mike Greentree said.

President Barack Obama appeared at the ball, where he spoke to troops in Afghanistan by teleconference. The crowd on the dance floor cheered those overseas.

“You will be on our minds tonight and every single night until our mission in Afghanistan is completed,” he told the troops.

But for that night, Vivian Greentree had something else on her mind: getting her reluctant husband to dance.

“You’re about to leave in a week,” she told her husband, “and you’re not going to be here for a year? The least you can do is a slow dance.”