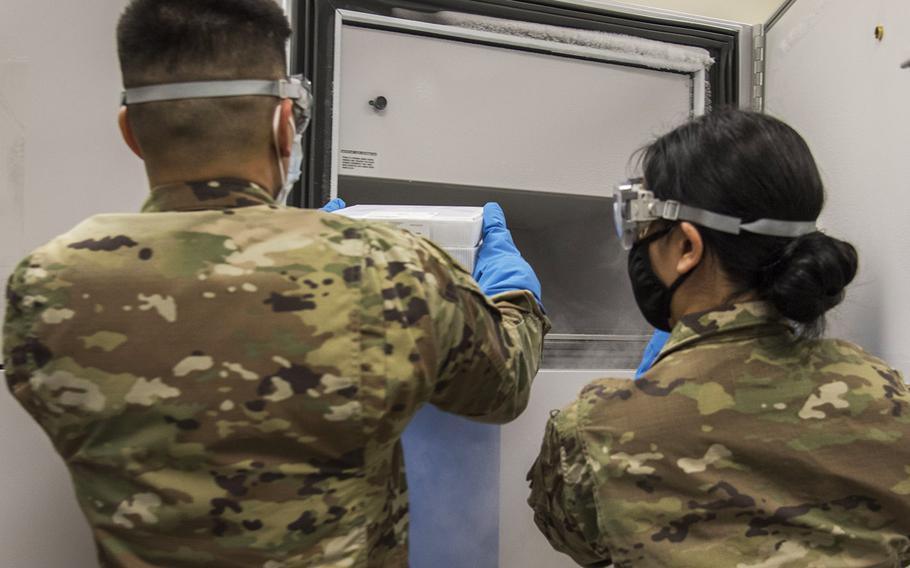 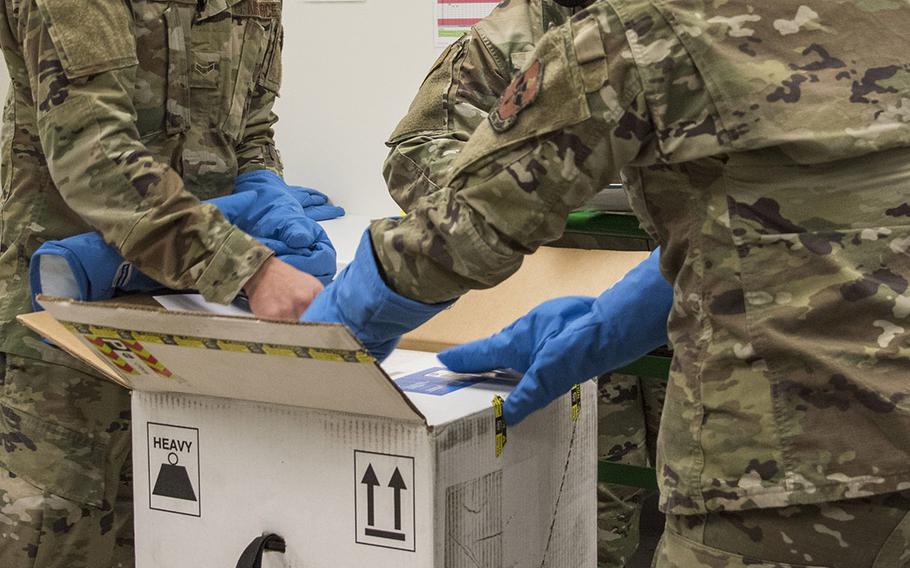 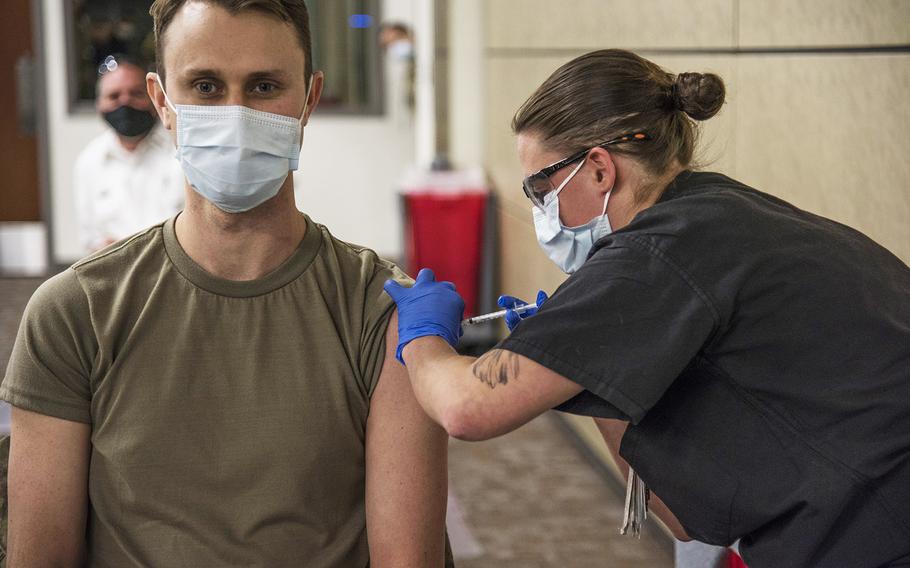 “While I was first in line, while I was the first one to get it, it wasn’t for me. It was for my patients. For the patients that I can now see and not be concerned about spreading this disease,” said Gausepohl, who is the medical director of the 59th Medical Wing Family Emergency Center.

“A vaccine in the freezer or on the shelf is not doing anything to increase immunity and stop the pandemic, so we are going to do everything possible to put shots in arms as quickly as possible,” DeGoes said Tuesday during a news conference. “Our focus is efficiency while maintaining the highest emphasis on safety all the way along.”

The Defense Department’s initial allocation of the vaccine is 43,875 doses, Army Lt. Gen. Ronald J. Place, director of the Defense Health Agency, said last week. Each of the initial 16 U.S.-based military sites included in the first round of distribution has more than 1,000 people who are in the top priority group to receive vaccines, such as health care workers. Once the Defense Department proves their distribution process works with the initial sites, they will begin sending the vaccine to hundreds of other locations in the United States and around the world, according to Place.

The locations were picked based on several criteria including having ultra-cold storage for the vaccines and large medical and security staff who can receive the initial phase of the vaccine and also monitor the vaccination process, according to Place.

Vaccinations were administered at other facilities Monday, and recipients included acting Defense Secretary Chris Miller, who received the shot at Walter Reed.

Army Gen. Mark Milley, the chairman of the Joint Chiefs of Staff, and combatant commanders were announced as planned recipients of the initial doses, but the Pentagon has not said whether any of them received the vaccine Monday.

Fort Bragg received its first shipment of vaccines at about 10:30 a.m. Tuesday. In less than three hours, Roni Paul, an emergency room nurse at the base’s Womack Army Medical Center, received the first inoculation of the vaccine there.

“This is a milestone moment for us here on Fort Bragg,” said Lt. Gen. Michael “Erik” Kurilla, commander of XVIII Airborne Corps and Fort Bragg. “We would not have arrived at this moment without our first responders, medics, health care workers, and the incredible staff of the Womack Army Medical Center.”

While the Defense Department is not releasing how many vaccines went to each site, DeGoes said the San Antonio facility and Walter Reed received the largest first-round shipments. The vaccine is delivered in special cold packaging, each containing 975 doses.

Wilford Hall was chosen because it houses the Air Force’s allergy and immunology experts and training facility. With Wilford Hall and the Army’s Brooke Army Medical Center in San Antonio, there is a high concentration of military health care workers. The two facilities combined support about 150,000 beneficiaries, DeGoes said.

Brooke Army Medical Center is finalizing requirements to begin vaccinating its staff and Wilford Hall will transfer vaccines from its freezers to the Army’s as requested, DeGoes said. That could happen by the end of the week.

He expects Pfizer vaccine shipments to continue each week, depending on the national supply and manufacturing capability. Should the Moderna vaccine be approved later this week, DeGoes said the site will also begin receiving shipments of that vaccine.

Following Gausepohl’s vaccination, the medical facility continued to vaccinate health care workers and first responders throughout Monday afternoon, as recommended through guidelines from the Defense Department and the Centers for Disease Control and Prevention.

Following those populations, the Pentagon will then begin vaccinating those who are part of “critical national capabilities,” such as sailors on nuclear submarines, cyber security personnel and defense leaders.

Personnel preparing to deploy within three months will be the next population to receive the vaccine and then all other critical and essential support personnel.

The next stage of vaccine recipients for the Defense Department includes high-risk beneficiaries, such as residents at the military retirement homes, and then the remaining healthy population, according to the department.

The San Antonio employees vaccinated first were pulled from several departments to stagger any potential side effects caused by the injection. Each recipient will continue to be monitored and, so far, Gausepohl said he’s only experienced minor pain where the shot was administered. Now, he looks forward to seeing his family without fear that he is bringing the virus home from work.

It’s unclear when the average, healthy servicemember could be eligible for vaccination, but DeGoes said he doesn’t foresee this happening before March.

Monday’s vaccinations were just the “very first in controlling this pandemic,” DeGoes said. “I am confident in the safety of this. As soon as my number comes up, I will be taking the vaccine. … This is a scientifically valid and safe vaccine.”