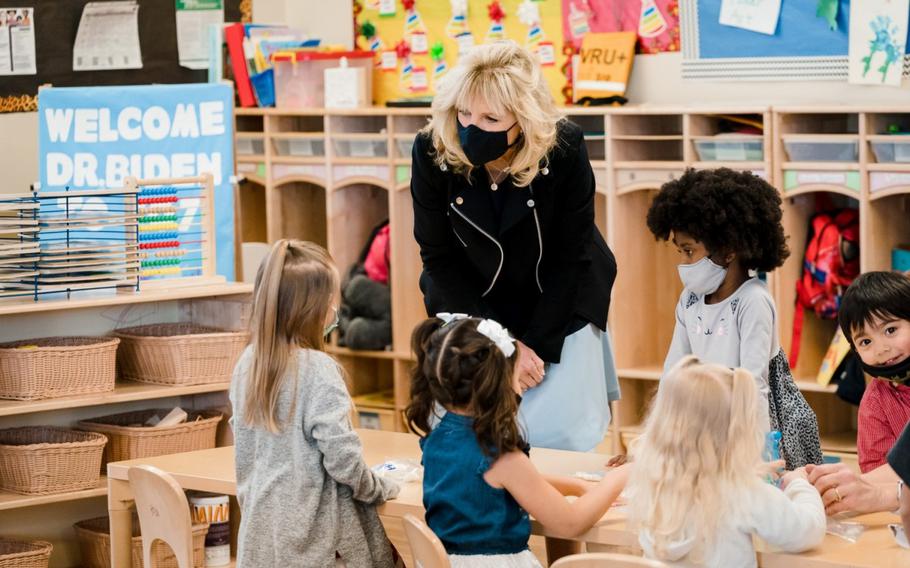 WASHINGTON — First Lady Jill Biden plans to focus on the education, employment, entrepreneurship, health and well-being of military and veteran families as part of her relaunched Joining Forces initiative, she announced Wednesday.

Biden unveiled her new priorities for the campaign during a speech at the White House. Biden first started Joining Forces with former First Lady Michelle Obama in 2011 as a way to help military families with employment and education. The program was discontinued during former President Donald Trump’s time in office.

Biden plans to expand its scope and make it permanent, she said.

“Our goal is that this work will live on long after we leave as a permanent priority for every White House, because you deserve nothing less,” Biden said.

She divided the priorities into three groups: employment and entrepreneurship; military child education; and health and well-being.

According to a Defense Department survey, the unemployment rate for spouses of active-duty service members was 22% in 2019 — before the economic fallout from the coronavirus pandemic. The overall unemployment rate in the U.S. was 3.5% that year.

Military families frequently move, often with little notice. Spouses often must quit their jobs and face long periods of unemployment or underemployment after they move, according to a Chamber of Commerce report from 2017. Spouses who hold professional licenses must also overcome the obstacle of getting licensed in a new state or country.

Biden said her office would work with employers to create more flexible, transferable and remote job opportunities for military spouses. She also promised to increase resources for spouses who are interested in entrepreneurship.

Child care would also be part of that effort, Biden said. President Joe Biden is in the process of pitching his new infrastructure plan, which earmarks $25 billion to upgrade and build child-care centers. Another piece of Biden’s plan is expected to include a universal prekindergarten program.

“All of you deserve opportunities to do the work you love, whether that means keeping your job when you move from base to base or owning your own businesses,” Jill Biden said Wednesday. “And we need to make sure that you can get quality child care when you need it so that you don’t have to feel like you’re choosing between your job and taking care of your kids.”

“Our schools want to support all students, but they don’t always know how to do so,” she said. “We’re going to work with educators and our government partners to make sure that you — our military-connected kids — have what you need to succeed.”

Last, Joining Forces will focus on the physical, social and emotional health of military families, Biden said. She listed the issues that disproportionately affect military families, including depression, substance abuse and food insecurity — all of which have been made worse during the pandemic, she said.

Addressing those issues was a “national security imperative,” she said.

“It is critical to acknowledge that they too shoulder the weight of the past 20 years of sustained warfare,” Biden said.

The White House plans to collaborate with federal agencies, nonprofits and businesses to create solutions to these issues.