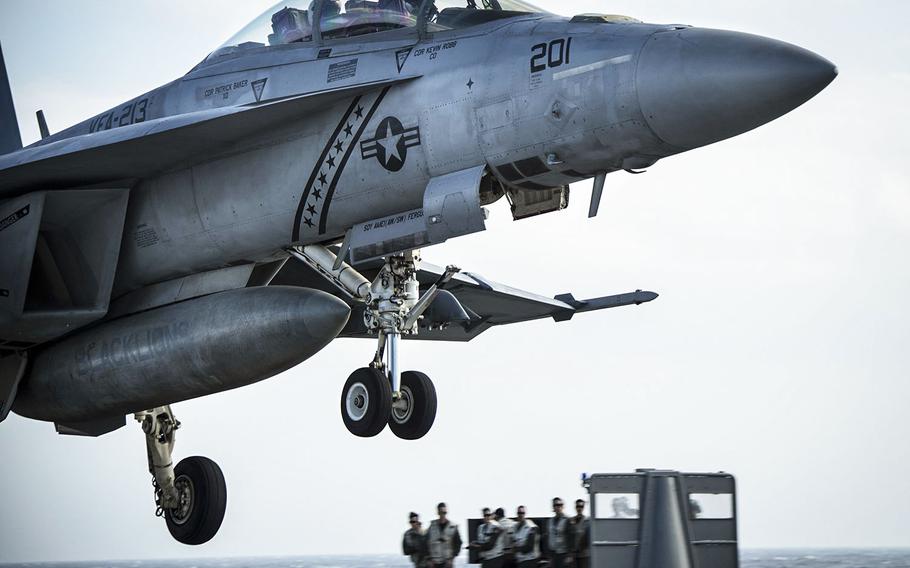 WASHINGTON — More than 100 members of a fighter squadron were kept behind as the USS Gerald R. Ford went underway Thursday after one of its sailors tested positive for the coronavirus, according to a Navy official.

The sailor, who tested positive Wednesday, is a member of the Strike Fighter Squadron (VFA) 213, which flies F/A-18F Super Hornet aircrafts and is based out of Naval Air Station Oceana, Va. The sailor, who has been in isolation since last week, was never aboard the aircraft carrier but the individual had been in contact with other squadron members who had been on the ship Tuesday ahead of it going underway, said Cmdr. Jennifer Cragg, a spokeswoman with Naval Air Force Atlantic.

More than 100 sailors of the squadron had gone aboard the Ford and had been medically screened with none of them having flu-like symptoms, according to Cragg.

The sailors disembarked the Ford on Wednesday and have been ordered to restrict their movement as a precautionary measure as they wait to complete additional health screenings and contact tracing, Cragg said. Most of the sailors will be able to return to work Saturday, and those who had been in close contact with the sailor are in isolation at their homes for 14 days.

“At this time, the risk to other USS Gerald R. Ford sailors and embarked personnel is believed to be very low,” Cragg said. “All sailors who may have come into contact with the [coronavirus] positive sailor were removed from the ship, placed in a precautionary quarantine, and will be tested for [the coronavirus] prior to returning to the ship.”

The Ford had one sailor test positive for the virus May 4, but the individual had not been on the ship since May 1, The Virginian-Pilot reported. It is believed they were infected by a visiting family member.

The Ford is the first aircraft carrier in its class and has faced several delays due to issues with its new equipment such as weapons elevators and the catapult system for aircraft. Based out of Norfolk, Va., the aircraft carrier is conducting carrier qualifications for pilots in the Atlantic Ocean, Cragg said.

The Navy has the highest number of coronavirus cases in the military at 2,396 as of Friday, according to the Pentagon. The military has a total of 6,278 cases and three deaths, including one sailor who was assigned to another aircraft carrier, the USS Theodore Roosevelt.

Two ships have had outbreaks while deployed at sea, the Roosevelt and the destroyer USS Kidd. The Roosevelt had more than 1,100 positive cases and the Kidd had almost 80 cases as of April 30, the last update provided by the Navy. The Roosevelt was in port in Guam due to the outbreak for nearly two months, finally departing May 21.

The aircraft carrier USS Ronald Reagan based in Yokosuka, Japan, had its crew undergo a 14-day restriction of movement prior to departing port in early May. Navy officials have not said how many of the Reagan crew have tested positive for the virus, but The New York Times on April 22 reported 16 positive cases associated with the carrier.