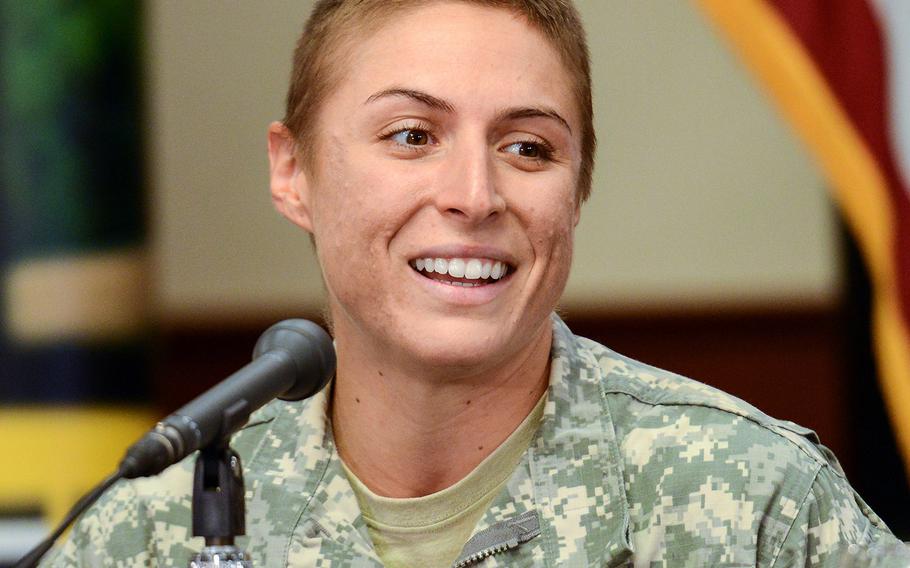 Capt. Kristen Griest walks into a conference room Thursday, Aug. 20, 2015, at the Maneuver Center of Excellence Headquarters at Fort Benning, Ga., to speak publicly for the first time since completing Ranger School. Griest and 1st Lt. Shaye Haver will graduated the next day from the elite leadership school; they are the first women to earn the coveted Ranger Tab. (Corey Dickstein/Stars and Stripes)

FORT BENNING, Ga. — A pair of West Point-educated Army officers on Friday will become the first women to graduate from the Army’s legendarily difficult Ranger School, but questions remain about whether they or other female soldiers will soon be able to serve in the service’s ground combat jobs.

After completing 123 days of training in mountains, swamps and forests, Capt. Kristen Griest and 1st Lt. Shaye Haver will be pinned alongside 94 men with the coveted gold and black Ranger Tab, a decoration soldiers say is an indication of a tough, professional leader. Only about 3 percent of Army soldiers are Ranger qualified.

Griest, a military police officer stationed at Fort Campbell, Ky., and Haver, an Apache helicopter pilot from Fort Carson, Colo., were among a group of 19 who became the first female soldiers authorized to participate in the three-phase school at Fort Benning, in the north Georgia mountains and in the swamps of Eglin Air Force Base, Fla.

So far, only Griest and Haver have completed the course. A third female soldier, whom the Army has not identified, is conducting patrols in the mountain phase. The other female participants were dropped from the program for failure to meet standards.

Griest and Haver, speaking about the training for the first time Thursday, said they felt little or no bias from their male peers and Ranger instructors. Both said they had to overcome unexpected difficulties.

“It was a humbling experience,” Griest said. “We thought we were more prepared than we turned out to be … I had some low points, particularly in the swamps in Florida. I never had anything too difficult where I thought of (voluntarily) leaving the course.”

The course is purposely tough, said Col. David Fivecoat, commander of the Airborne and Ranger Training Brigade. It’s designed to push soldiers to their limits, primarily through a lack of sleep and food.

“I’m just happy to be done with the course,” Griest said. “I came here to be a better leader. I feel like I accomplished that.”

The Army opened April’s Ranger School class to qualified women on a trial basis as it weighs opening traditionally all-male combat arms jobs to female soldiers following a 2013 Pentagon directive that mandated services to open all jobs to qualified women by the beginning of 2016 or provide an official waiver to Defense Secretary Ash Carter detailing why certain positions should not be opened to female troops. Those decisions should be made public on or around Jan. 1, the Pentagon said.

Under consideration is whether to open the 75th Ranger Regiment, an elite special operations raid force, to women. Despite the similar name, the Ranger Regiment, a group of three battalions and a headquarters element under U.S. Army Special Operations Command, is only loosely related to the Ranger School, which falls under Fort Benning’s Maneuver Center of Excellence, part of Army Training and Doctrine Command.

While the majority of officers and noncommissioned officers serving in the 75th Ranger Regiment have completed Ranger School, only a small percentage of Ranger School graduates serve in the unit, Fivecoat said.

Carter, speaking Thursday at the Pentagon, said potentially opening the 75th is part of the review he will conduct of all DOD positions closed to women.

Each year, about 4,000 students begin Ranger School in an effort to further their careers, earn the respect of their peers and develop leadership skills they cannot hone as well at their home units. Only about 1,600 students graduate the course each year.

“Ranger School, we think it’s the toughest, most demanding training the Army does today, and we like to think that the DOD does today,” said Command Sgt. Maj. Curtis Arnold, senior enlisted leader for the Airborne and Ranger Training Brigade. “They’re getting the hardest training they’ll ever get close to combat, maybe ever more than combat itself, at times.”

While earning the Ranger Tab is not a prerequisite for promotion, in certain military occupational specialties — primarily infantry and armor — it is expected for officers and noncommissioned officers, Arnold said.

“We’ve proven time and again that Ranger Tab carries significant weight,” said Arnold, who earned his in 1996. “If you’re an infantry student and … you want to get promoted you probably need to go to Ranger School.”

Less than 5 percent of infantry officers selected to command at the battalion level are not Ranger qualified, Fivecoat said. Among high-level NCOs, about 80 percent selected as senior enlisted advisers at or above the battalion level have graduated Ranger School, he added.

Ranger School is also beneficial for soldiers serving in positions that don’t typically place them on the front lines.

“I tell all soldiers, if you have the opportunity to go to Ranger School, you should take advantage of that,” Arnold said. “Even if they don’t earn their tab, they’re a better trained soldier … this is a school. We’re here to teach them something. The tab is the cherry on top, but in the end you get some world-class training you wouldn’t get at unit.”

A chance to attend

The chance to train with the Army’s most highly skilled soldiers is what propelled Greist to attend Ranger School. Even as a West Point cadet, long before the Army planned to open classes to women, she aimed to enroll.

“It was always just about trying to get the best training the Army could offer to be the best officer for my soldiers,” she said. “I feel like I’ve finally reached that level. I can still improve, but being able to achieve that level of training is special for me.

“It was just a goal I wanted for so long.”

Haver did not considered attending Ranger School until she learned the class would be opened to women. She was skeptical of her ability to pass, but her confidence grew as the course went along and her proficiency improved in conducting patrols.

“We just kind of forced ourselves through,” said Haver, who added there were low points along the way, but seeing her male peers struggling as much as she was “kept me going.”

The Army has announced it will open a second trial class to women in November. Griest encouraged other female soldiers to enroll.

“I know a lot of women interested in going … I know many very qualified women who could pass the course,” she said. “It’s more a mental challenge than a physical one. If you want to get through, I think you can make it.”

Greist and Haver were recycled twice during the training’s initial phase at Fort Benning. Although they did not initially pass the standard, they impressed Ranger School leaders enough to earn re-dos, allowing them to start the course over from Day One.

It was obvious they had the physical capabilities to complete the course, Arnold said.

“You saw that they were going to do it,” Arnold said Thursday. “These two women who are graduating, they have absolutely earned the respect of every Ranger instructor here. These soldiers are tough, they do not quit, they do not complain … These two soldiers earned their Ranger Tabs same as anyone who has ever earned a Ranger Tab.”

Greist and Haver accomplished the feat while performing to a very specific standard — the same standard every Ranger-qualified male soldier is held to, he said.

“I think we’ve done a great job (ensuring that standard), to be honest with you,” Arnold said. “Our standards have been met; we didn’t compromise our standard. These two soldiers have proven that regardless of gender the standards can be met.”

Male students took notice, as well. Greist and Haver earned exemplary marks on their peer reviews, a portion of the grading that is heavily weighted in determining who graduates the course.

“These two women finished well ahead of some of the males, and well ahead of 60 men that didn’t even complete the ruck march,” Carvalho said. “So right then and there that was what validated it for me. These women are for real; they’re here to stay. They’re carrying the same weight and doing the same thing as me, and they’re doing it.”

Second Lt. Michael Janowski, who was partnered with Haver through much of the course, was initially skeptical about having a woman in his squad. He recalled an evening during a patrol in north Georgia when he was carrying a particularly heavy load as the squad’s M320 gunner.

“I was struggling, and I asked at the halfway point if anyone could help carry some of this weight, and I got a lot of deer-in-the-headlights looks,” he said. “A lot people couldn’t take any more weight, (Haver) was the only one to volunteer to take any of that weight. She carried it the last half of that ruck. She saved me. I probably wouldn’t be (graduating) if it wasn’t for Shaye. From that point there was no more skepticism.”

As services push toward gender-neutral standards for jobs, the first two female Ranger-qualified students say they have different plans for the future.

Haver intends to remain an Apache pilot and work her way up “as long as the Army will allow,” and Greist, who intends to go into civil affairs, hopes to attend Special Forces training if the Army opens the Green Beret ranks to women.

They understand their place in history; however, Haver said they didn’t attend Ranger School to break barriers. They simply wanted to learn to be better soldiers and leaders.

“It’s awesome to be part of history in Ranger School,” Haver said. “It takes a certain kind of person to accomplish this … but my ability to be a role model (for other women) — it’s awesome, but I’ve been commissioned to be an Army leader, and I’ll do that until the day I get out, and then some.”