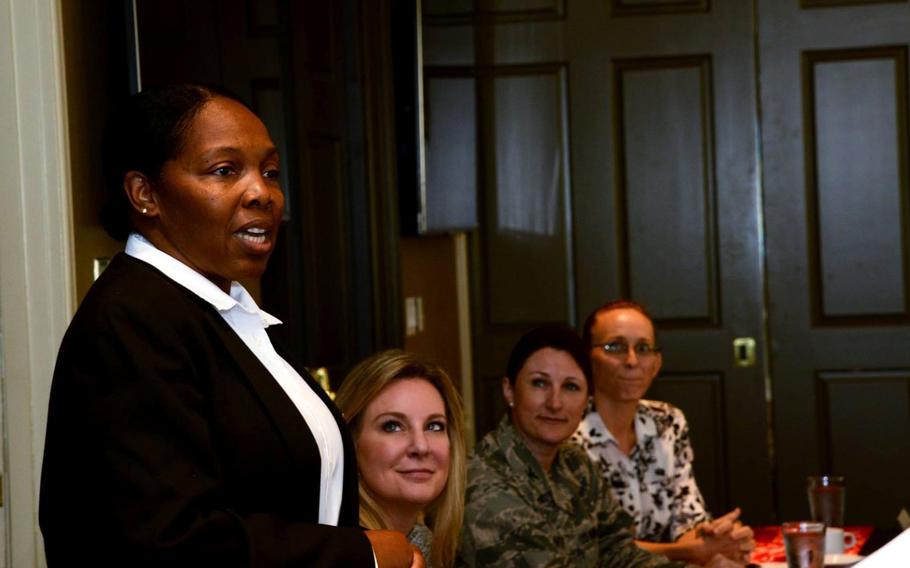 The Women Empowering Women event, sponsored by female senior leaders at Maxwell, brought together women in the field of combat and military regulations to inspire confidence and to make networking connections. (U.S. Air Force photo)

Col. Beatrice Dolihite has an alarm clock on her desk that goes off every afternoon to remind her of her son's baseball practice.

It is what she does to prioritize what matters in her life. Being the commander of the 42nd Medical Group at Maxwell Air Force Base is important, but her son comes first.

Dolihite was one of four women on the panel of the first-ever Women Empowering Women Symposium.

Nearly 100 women gathered last week on the top floor of Montgomery's RSA Tower where they had a full view of the capitol's downtown area as they sipped coffee and munched breakfast pastries.

The event was more than a pamper session. It was a time for young women making the male-dominated field of combat and military regulations to feel confident, breathe and to find mentors and friends. It was the first-ever such empowering event just for women and was sponsored by female senior leaders at Maxwell.

Women who have already paved the way and made successful careers in the Air Force, the Montgomery Police Department and corporate business came to the forum, not to boast of their decades-long careers and accomplishments, but to encourage younger women they too could defeat the odds stacked against them.

They provided the audience with a glimpse into their lives, their personal and family struggles and ways they have learned to cope, press forward and succeed with grit, determination and faith.

Other breakout sessions and informal panels included experts in a variety of fields from the Montgomery Advertiser's Kym Klass who spoke on health, fitness and the wellness of the whole body and others who answered questions about counseling, mental health, depression and finance.

Being an airwoman may be one of the most difficult things Tech Sgt. Tracy Eastman has done, but she wouldn't trade a second of it. Since being in active service for more than 18 and half years, she has been deployed nine times and is currently the flight chief of Family Health at Maxwell.

As a mother, she's been asked how she balances work, friends, family, a marriage and being away from her children.

"It is a challenge to leave my children, but I know the sacrifice is worth it. I know the reward is going to be there," Eastman said.

The forum was a way to help other women just starting in their careers to find guidance and for others to find comfort in knowing they are not alone she added.

"We have a lot of young females coming up through the military and this gives them an opportunity to talk with senior leaders who have walked the road before, have lived through these challenges and give them that guidance and feedback that may make their path a little bit easier," Eastman said.