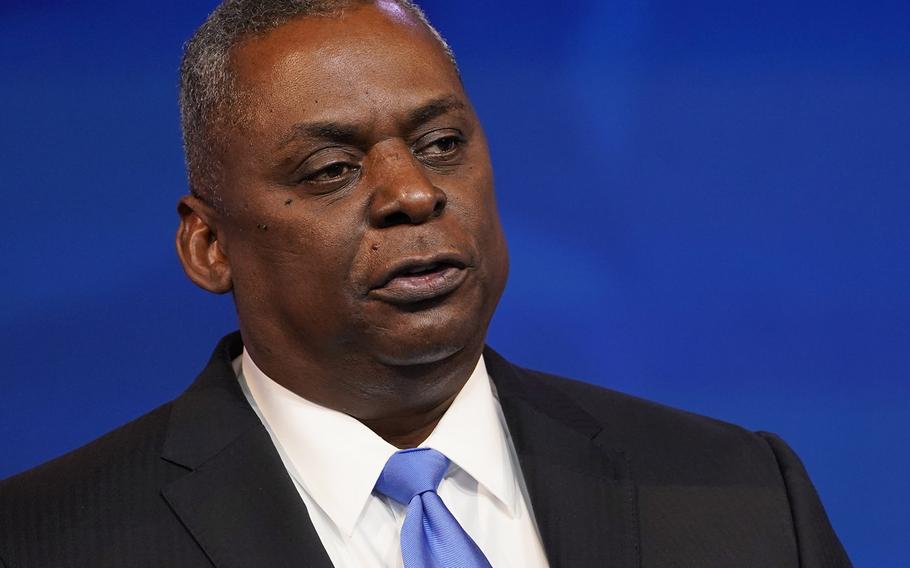 In a Dec. 9, 2020 photo, President-elect Joe Biden's nominee for Secretary of Defense, Retired Army Gen. Lloyd Austin, speaks during an event at The Queen theater in Wilmington, Del. (Susan Walsh/AP)

Lawmakers should challenge Austin on how he would approach the role of defense secretary differently than he did the jobs that he held during his four decades as an Army officer, Lindsay Cohn, an associate professor at the U.S. Naval War College whose research focuses on civil-military relations, told the Senate Armed Services Committee.

The committee met Tuesday to examine whether to grant Austin a waiver to a law mandating military officers spend seven years out of uniform before serving as the Pentagon’s top civilian. Austin retired from the Army in 2016, after leading U.S. Central Command.

“The civilian side of the Department of Defense has lost both civilian influence and respect over the last several years, and I think that is a problem,” Cohn said, arguing defense secretaries must think “about defense and security in policy terms and not just in what we might think of as practical military terms.”

“It is a short step to the belief that only professional military officers know how to govern military forces,” she said.

If confirmed by the Senate, Austin would become the first Black defense secretary. Austin is slated to testify before the Senate Armed Services Committee on Jan. 19, one day before Biden’s inauguration. But his confirmation is not expected to come until sometime after the new president takes office because the full Congress is unlikely to grant him a waiver ahead of time. The House Armed Services Committee has set a hearing to examine his fitness for a waiver on Jan. 21. Austin will testify at that hearing.

Cohn said presidents typically should be granted the Cabinet officials they want to serve in their administrations, and Biden had labeled Austin uniquely fit for defense secretary at this moment in U.S. history. She also acknowledged his selection could help “break down significant barriers faced by people of color and underrepresented groups.”

However, Cohn worried granting him a waiver from the so-called “cooling-off period” between serving in uniform and leading the Pentagon could set a “dangerous precedent” so closely on the heels of the last such waiver. That was granted in 2017 to President Donald Trump’s first defense secretary, retired Marine Gen. Jim Mattis.

Mattis took control of the Defense Department and largely insulated himself with military officials with whom he had worked in the past, said Kathleen J. McInnis, a specialist in international security with the Congressional Research Service, who testified alongside Cohn on Tuesday.

As a result, decisions that had long been made by civilian officials were often made by uniformed service members and the power of the Joint Chiefs of Staff grew. However, she said those changes began before Mattis’ time in the Pentagon and had been trending that way for the last decade. Cohn also said passing a waiver and confirming Austin to the Pentagon’s top job would “not heal nor break American democracy by itself.”

The 1947 law restricting military officers from quickly becoming defense secretary was intended to ensure civilian control of the military. It has been granted only twice, with Mattis and George Marshall, a former five-star Army general who received a waiver in 1950 to serve as defense secretary for former President Harry Truman during the Korean War.

Like Austin, Mattis retired from the military after leading CENTCOM and he was easily granted the waiver and confirmed 98-1 by the Senate on Jan. 20, 2017, just hours after Trump was sworn into office.

Few senators on Tuesday indicated how they would vote on the issue of a waiver for Austin, but Sen. Richard Blumenthal, D-Conn., said he suspected he was in “the minority” in his commitment not to support the measure. He said he worried it would set “a new norm … creating a danger that the exception will swallow the rule.”

Nonetheless, Blumenthal said he was encouraged in a recent conversation with Austin that the retired general could properly fulfill the role of defense chief. Blumenthal said Austin had told him that he would commit to principals of a civilian-led military, including to ensure civilian personnel were empowered to craft key policy and a commitment to greater transparency with lawmakers.

Sen. Elizabeth Warren, D-Mass., also said she would not support a waiver for Austin, just as she had not for Mattis. However, she said she did not rule out later voting to confirm him “on his merits,” should the waiver ultimately pass.

Sen. Tim Kaine, D-Va., said Congress faced an “easy case and a hard one” with Austin. He said the former general is “immensely qualified” for the position, but lawmakers must weigh if a second waiver in such a short period of time is appropriate.

One senator said Biden should make a better argument for why Austin is the best choice now for defense secretary.

“The president[-elect] has basically ignored a precedent Congress has set in the past that would require the seven-year waiting period,” said Sen. Mike Rounds, R-S.D. “What I haven’t seen is the president’s logic or full explanation for why he has asked us to once again to step away from what is established law, [and] I don’t think that is something that Gen. Austin should have to answer. I think that’s something that the president[-elect] should share.”