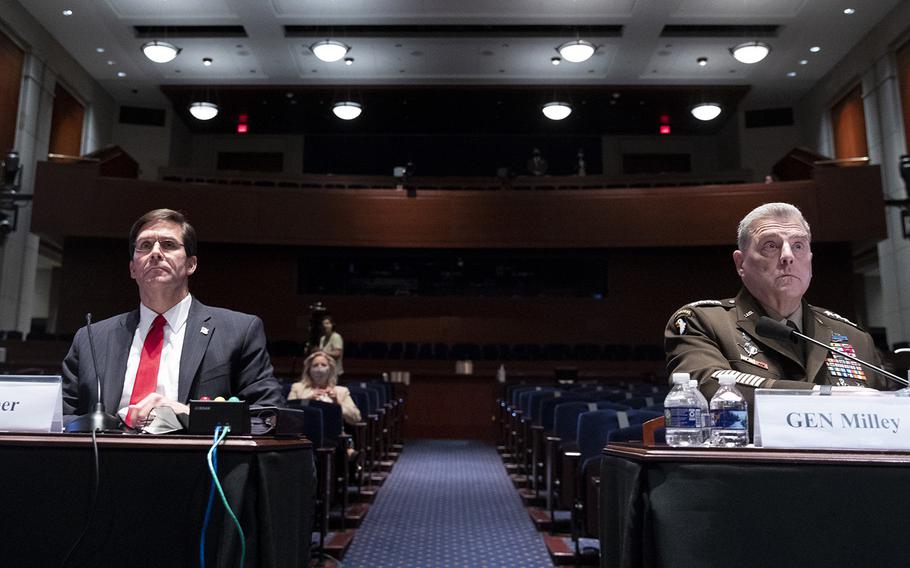 Esper also told House lawmakers that top U.S. generals overseeing efforts in Afghanistan had been studying intelligence claiming a Russian program paid Taliban insurgents to target NATO service members, but the leaked information did not originate from the Defense Intelligence Agency or other military organizations.

The defense secretary said briefings that he had received did not use the term “bounty” to describe the alleged Russian campaign, but he was informed some officials in the intelligence community had asserted the Russians offered “payment” to Taliban-linked groups to target Americans.

“All of the defense intelligence agencies have been unable to corroborate that report,” Esper told House Armed Services Committee members Thursday during a hearing on Capitol Hill. “Commanders take all reports seriously, regardless to the credibility or confidence [in the intelligence] … I want to reassure you of that. We’ve been in discussions with commanders [in Afghanistan] about this.”

Esper and Army Gen. Mark Milley, the chairman of the Joint Chiefs of Staff, told lawmakers that the military continued to study the issue, pledging repercussions for Russia if the program was proved true. The Pentagon leaders, who testified Thursday in person from separate tables several feet apart due to the coronavirus pandemic, said Russia has for years worked to interfere with American work in Afghanistan.

“As of today, we don’t have cause-and-effect linkage to a Russian bounty program causing U.S. military casualties,” Milley said. “However, we are still looking. We are not done. We’re going to run this thing to ground.”

On June 26, The New York Times, citing unnamed officials, reported U.S. intelligence officials had discovered Russian military personnel had offered the bounties to Taliban-linked groups. The Times wrote President Donald Trump and others in the White House were made aware of the intelligence but did not pursue it further. Trump has denied direct knowledge of the alleged Russian scheme.

As Esper took questions about the bounties Thursday during the hearing, he decried national security-related leaks coming from government officials, including from inside his own organization. The defense secretary said he launched an investigation after a series of “bad leaks” last year that have continued into 2020, including disclosure of the potential Russian program.

“We are aggressively pursuing leaks within the Defense Department,” Esper told lawmakers. “It’s something we need to get control of. It’s bad. It’s unlawful. And it needs to stop.”

Esper said he had recommitted the department to consider operational security measures when discussing military matters. He said his investigation seeks to find the people who leak classified information, sensitive but unclassified information including potential changes to policy that have not been finalized, and “unauthorized discussions with the media.”

Esper said his announcement of the investigation into leaks came only after he considered all aspects of the Constitution, including the First Amendment which protects a free press.

“I think a free and open press is critical to a free and functioning democracy,” he said.

Lawmakers had varying responses to Esper’s pledge to crack down on leaks. Rep. Don Bacon, R-Neb., was among those who supported the defense secretary’s effort.

“These leaks, I think, undermine our intelligence communities and just undermines the confidence of our citizens in the president, in this case, or … in our intelligence organizations, themselves,” said Bacon, a retired Air Force brigadier general who served in Iraq. “I think it’s imperative we start holding people accountable to the maximum extent the law allows.”

Rep. Seth Moulton, D-Mass., a Marine veteran who also served in Iraq, asked Esper to focus more on supporting his troops than going after selected leakers.

“I don’t think you get to pick and choose which leaks you like,” Moulton said. “Which leaks aren’t damaging versus what is an [operational security] problem. This White House routinely uses leaks to their advantage, but suddenly it’s a problem to their apologists.”

The hearing marked the first appearance by the Pentagon’s top civilian and military officer since early March and was called to discuss the military’s roles in civilian law enforcement efforts across the nation — especially in Washington, D.C. — amid recent civil unrest demanding racial justice and an end to police brutality.

Rep. Adam Smith, D-Wash., chairman of the House Armed Services Committee, had demanded Esper and Milley appear before the committee to discuss their actions, as more than 40,000 National Guard troops were mobilized nationwide and active-duty troops were positioned just outside Washington to respond, if needed. Those troops never entered the national capital.

On June 1, as protests in the wake of George Floyd’s death at the hands of Minneapolis police one week earlier spread across the country and sometimes grew violent, Trump demanded the nation’s governors active their National Guard troops in force and “dominate” or he would call in active-duty forces. Esper, in the same private phone call with state leaders that quickly leaked to the media, added they needed to “dominate the battlespace” to restore order.

Later that day, Esper and Milley joined Trump on a walk through White House-adjacent Lafayette Square just after mostly peaceful protestors had been forcibly moved by federal law enforcement, who were backed up by D.C. National Guard. That walk and Esper’s participation in a photo opportunity alongside Trump drew the ire of lawmakers, including Smith, who demanded the military must remain apolitical.

On Thursday, Esper and Milley reiterated statements they made in the days and weeks that followed that incident, apologizing for their participation in the walk and vowing to keep the Pentagon out of politics.

In his testimony, Milley told lawmakers that he had advised the deployment of the about 1,700 active-duty troops from Fort Drum, N.Y., and Fort Bragg, N.C., to Washington’s outskirts. He said even as he provided the advice he hoped they would not be needed.

“It was my view then and it remains so now, that local state and federal police, backed up by the National Guard under governors’ control, could and continually can effectively handle the security situation in every case across the country,” Milley said.