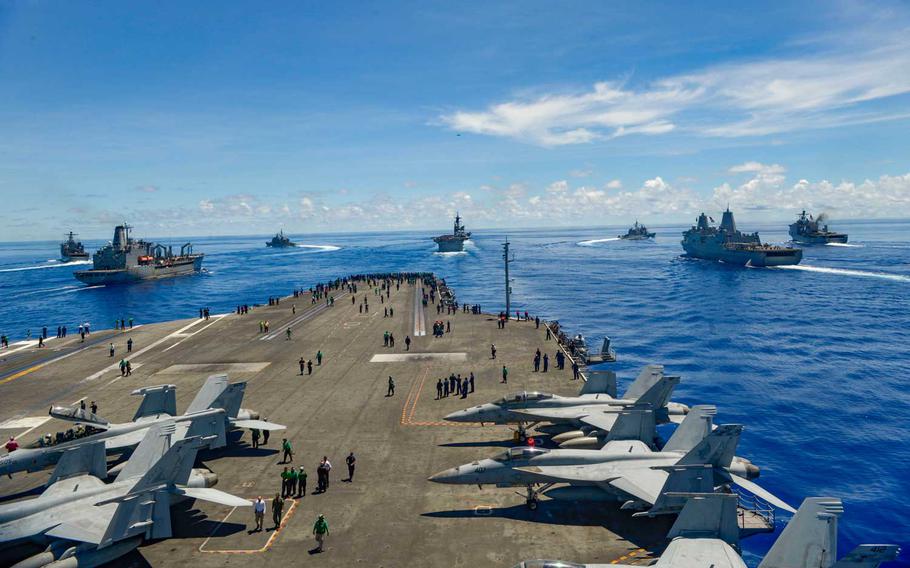 The Navy wants to double its number of submarines as part of a modernization plan to build more than 500 ships by 2045 to maintain a competitive edge against other naval powers such as China and Russia, Defense Secretary Mark Esper said Tuesday. (Oswald Felix Jr/U.S. Navy)

WASHINGTON — The Navy wants to double its number of submarines as part of a modernization plan to build more than 500 ships by 2045 to maintain a competitive edge against other naval powers such as China and Russia, Defense Secretary Mark Esper said Tuesday.

“We believe that this is the vision for the future that will ensure that we maintain the greatest Navy in the world,” he said during a speech at the Center for Strategic and Budgetary Assessments, a Washington-based think tank specializing in U.S. defense policy, force planning and budgets.

Esper provided an overview of the plans developed from Defense Department findings, called “Battle Force 2045,” though the Pentagon has yet to share the Navy’s 30-year shipbuilding plan or its naval force study with Congress.

The defense secretary directed a future naval force study earlier this year to determine how the U.S. Navy can maintain its edge against the navies of other military powers.

Esper said the need to modernize the Navy is in part due to China’s own naval modernization and shipbuilding efforts. The Pentagon’s China report released Sept. 1 determined the country aims to have a “world-class” military on par with the United States by 2049. It already has the largest navy in the world at 350 ships. The United States now has 296 deployable battle force ships, according to the Navy.

Esper said during his speech that the Pentagon has found a “credible path” to get to 355 ships within the next 15 years, which had been the Navy’s previous shipbuilding goal. However, he did not offer specifics Tuesday, other than to say they were included as part of the funding and reform efforts being created for the Battle Force 2045 plan.

The first priority of that plan is to have a large number of attack submarines, with a target of 70 to 80 submarines overall. This will require the Navy to build at least three next generation Virginia-class submarines every year “as soon as possible,” Esper said. The Navy now has more than 40 operational attack submarines, according to Pentagon documents.

“If we do nothing else, we should invest in attack submarines, because of the lethality they can deliver under the sea and survivability that they have. A clear overmatch that we have when it comes to the undersea domain and submarines in particular,” Esper said.

Large nuclear-powered aircraft carriers also will be part of the future Navy, still considered the force’s “most visible deterrent,” he said. The Navy is also looking at “light carriers,” such as the USS America amphibious assault ship that can go to sea with vertical takeoff and landing aircraft including the F-35B fighters and the MV-22 Osprey. These light carriers would free up the bigger carriers for more of the “critical high-end fight,” Esper said.

While there is more studying to be done on the appropriate mix of carriers, Esper said defense officials believe they will need at least eight to 11 aircraft carriers for high-end conflicts and up to six light carriers. The Navy has 11 operational aircraft carriers now and one operational America-class amphibious assault ship with another under construction, according to the service.

Unmanned naval vessels have been discussed in a number of congressional hearings about the future of the Navy and they are included in the Battle Force 2045 plan. Esper said the future force will have between 140 and 240 unmanned and “optionally manned” surface and subsurface vessels that can perform a variety of missions including surveillance, mine-laying and missile strikes.

“They will add significant offensive and defensive capabilities to the fleet at an affordable cost in terms of both sailors and dollars,” he said.

Continuing with the future of unmanned capabilities in the Navy, defense officials also want a variety of unmanned ship-based aircraft, including fighters and refuelers, Esper said.

The defense secretary also said he supports incorporating into the Battle Force 2045 plan the Marine Corps’ Force Design 2030 that focuses more on a joint naval force that eliminates Marine elements such as tank and artillery units. While it is still being studied, the Pentagon foresees needing more amphibious warfare ships within a range of 50 to 60 ships, Esper said.

With the goal to reach more than 500 manned and unmanned ships by 2045, the plan needs all the funding it can find. Funding from Defense Department reform efforts, such as combatant command reviews, will be put toward this ambitious plan, according to Esper. This money will increase the shipbuilding account by 13% within the Navy’s overall budget number, which matches the amount put toward new ships during former President Ronald Reagan’s military buildup in the 1980s, he said. Esper did not provide dollar amounts.

Congressional help will also be necessary to make the plan work. Esper said he wants lawmakers to stop using continuing resolutions to fund the defense budget and allow the military to divest from legacy systems so that the funds can be put toward “higher priorities.” He also said he will request that the Navy have the authority to put any end-of-year budget savings toward shipbuilding instead of losing the money when it is not spent.

“The combination of these funds, reforms and authorities will help ensure that Battle Force 2045 is adequately resourced,” Esper said.

The plan will also require the defense industry to have modern shipyards, better infrastructure, and skilled workers, he said.