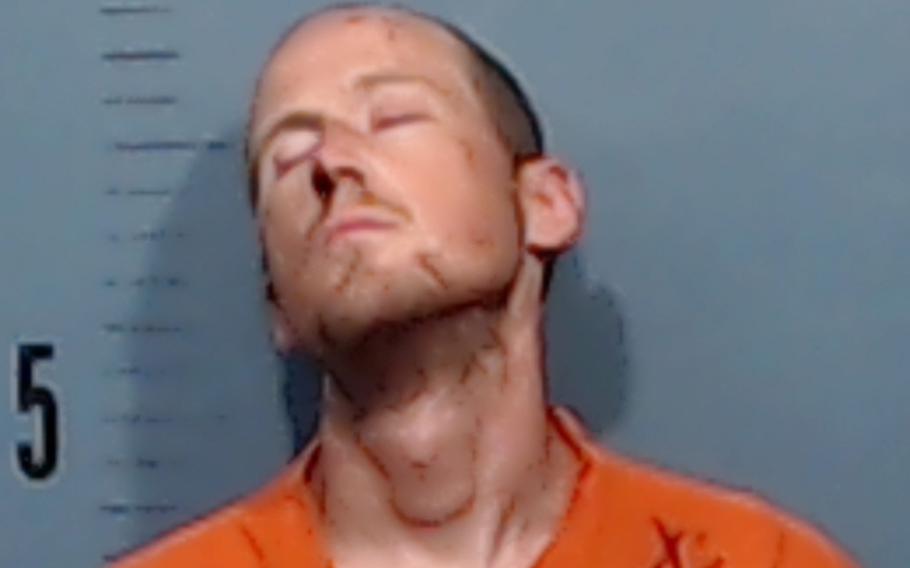 Airman 1st Class Erland Injerd is pictured here in a booking photo from the Taylor County (Texas) Jail. Injerd was arrested on Thursday, May 7, 2020, after more than two weeks on the run. (Taylor County Jail)

Airman 1st Class Erland Injerd is pictured here in a booking photo from the Taylor County (Texas) Jail. Injerd was arrested on Thursday, May 7, 2020, after more than two weeks on the run. (Taylor County Jail) 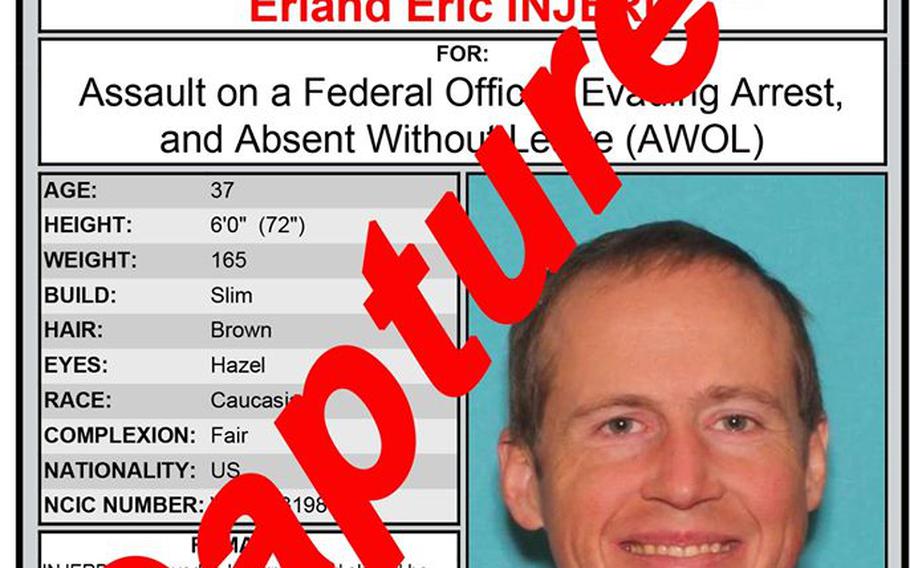 An Air Force Office of Special Investigations wanted poster shared on Facebook on Friday, May 8, 2020, shows Airman 1st Class Erland Injerd had been captured. Injerd evaded police for about two weeks after an altercation at Dyess Air Force Base in Texas on April 22. (Air Force OSI/Facebook)

An airman who fled a Texas base after an altercation with police has been apprehended, Air Force officials said, ending a 16-day manhunt.

Airman 1st Class Erland Injerd was arrested Thursday and was being held in a county jail near Dyess Air Force Base, the Air Force Office of Special Investigations said Friday on Facebook.

“Injerd will be held in pre-trial confinement at the Taylor County Detention Center, pending trial by courts-martial,” said the post, which included a graphic saying he was wanted for assaulting a federal officer, evading arrest and absence without leave.

A photo from his booking at the Taylor County jail appears to show cuts on his face. Jail records indicate that he was arrested at a Dallas apartment, about a 205-mile drive from the base.

“We are grateful for the help of the community and our law enforcement partners,” Air Force OSI said in its post.

The airman had been on the run since April 22, when he scuffled with two Air Force officials and a security forces patrolman outside his home on the base. Police said he may have armed himself before fleeing, and officials had heightened security on base “just in case” he posed a threat.

The officials had visited his home to order him to surrender his firearms after he’d sent a threatening email to his chain of command, the FBI said in a criminal complaint filed April 24. Injerd, who the military’s universal email address list showed as a weather forecaster, was charged with assaulting a federal agent during that visit.

Injerd then fled into the residence and out a basement window, scaled a perimeter fence and disappeared into a wooded area of Abilene, evading a police search.