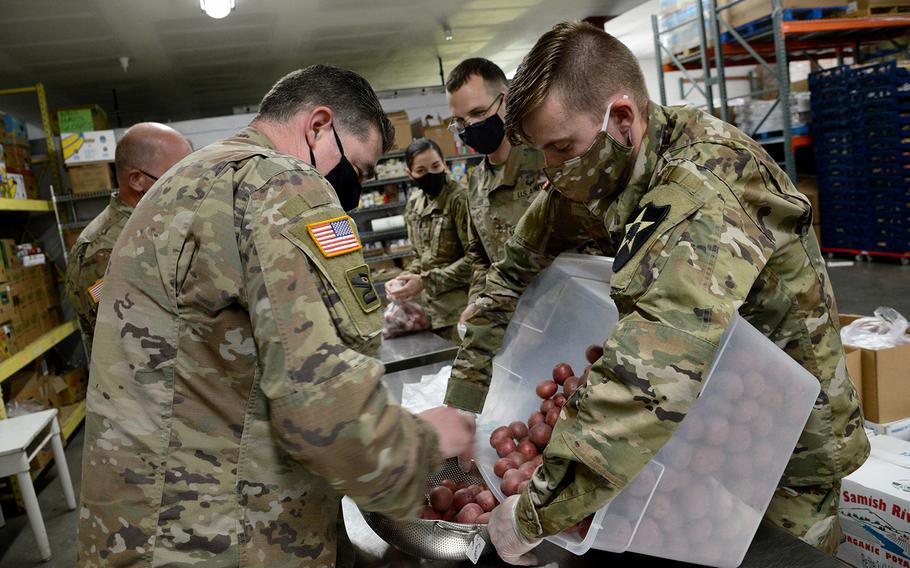 AUSTIN, Texas — Sen. Tammy Duckworth, D-Ill., introduced a bill Wednesday to extend the federal orders for National Guard troops deployed to combat the coronavirus pandemic so they have the opportunity to serve 90 days and attain more extensive benefits.

As it stands now, the deadline for federal deployments is June 24, which will leave most troops with only 89 days of service.

However, Duckworth’s bill, The National Guard COVID-19 Response Stability Act, would extend federal status to National Guard troops deployed during the pandemic through the end of the public health emergency, according to a news release from the senator’s office. This would guarantee states have enough troops to help battle the virus and give the Guard members more federal benefits.

“This legislation would ensure that all National Guard troops activated to respond to the COVID-19 pandemic are provided with the full benefits they’ve earned and will give states much-needed certainty during these uncertain times,” said Duckworth, a retired lieutenant colonel. She deployed in 2004 as a Black Hawk helicopter pilot with the Illinois National Guard.

Nearly 46,000 National Guard troops are deployed in all U.S. states and territories to combat the virus, which has reached more than 1.5 million confirmed cases nationwide. More than 92,000 Americans have died from the virus.

Of those troops deployed, 39,900 are on a federal status known as Title 32, which affords them greater benefits than state deployments. The others remain on state active-duty status, which offers less pay and benefits.

When National Guard members reach 90 days on federal duty, they become eligible to receive their retirement compensation three months sooner and receive greater support through the post 9/11 GI Bill, said retired Brig. Gen. Roy Robinson, president of the National Guard Association, an advocacy group for the service. The time doesn’t have to be consecutive but must occur in the same fiscal year, he said.

Because there are limited opportunities for most Guard members to activate on federal orders and many young people join to earn education benefits, the issue is “pretty critical,” Robinson said.

Specifically, Duckworth’s bill amends federal law to authorize state governors to order members of the National Guard to active duty for coronavirus response with full federal benefits, according to the release. This enhanced authority would be in place 30 days beyond the end of the public health emergency for the coronavirus, also known as COVID-19, that President Donald Trump declared March 13.

The most recent emergency declaration was renewed April 26 for a period of 90 days, which would allow Guard troops to remain on Title 32 status through August.

“The Trump administration’s repeated attempts to nickel and dime members of the National Guard would be wrong under any circumstance, but it is particularly offensive when these troops are responding to a deadly COVID-19 pandemic that has already killed more than 90,000 Americans,” Duckworth said.

Duckworth first addressed this concern for troops’ 90-day benefits in a May 15 letter to Trump. Blumenthal and Shaheen also signed the letter.

“The federal government should do more to ensure these public servants are properly taken care of and not exposed to unnecessary ambiguity,” the senators wrote.

But Rep. Adam Kinzinger, R-Ill., is a lieutenant colonel and pilot in the Air National Guard who does not agree that stopping federal status at 89 days is an issue.

“Assuming they went to basic training and that was at least 1 day long, they get the GI Bill,” he wrote on Twitter using the hashtag “not a scandal.”

Since March, National Guard members have taken on missions that state leaders have described as critical in the fight against the pandemic. Teams have entered nursing homes to test personnel and residents, and clean facilities. Others have manned mobile and drive-thru testing sites, delivered protective equipment to medical facilities and provided support to food banks.

The Pentagon reported 1,188 members of the National Guard have contracted the virus, but officials do not separate how many of those infections occurred among activated troops.

Trump took a state-by-state approach to authorize the use of the National Guard in a Title 32 status, which keeps the troops under control of their state’s governor while providing federal funding. Authorization began March 22 with New York, California and Washington state, which means only those troops who deployed following that authorization would reach 90 days of active duty. Florida, Louisiana, Maryland, Massachusetts and New Jersey and the territories of Guam and Puerto Rico were the next states to receive authorization on March 28.

Those directives were criticized at the time for only approving 30-day federal deployments, which also deprived troops the one additional day needed to secure a handful of federal benefits, such as Tricare health insurance, a housing allowance and death gratuity.

That one-day shortage was later amended by Trump, and there is hope that it could happen again, Robinson said, noting he supports Duckworth’s bill.

“The governors are out there in all 54 states and territories. Nobody is in better position to understand the response to the pandemic,” he said.

Robinson said copies of several requests from governors’ offices have crossed his desk with state officials asking for an extension of Title 32 status for their National Guard troops. No state requested troops be pulled out prior to the end of June, he said.

“I think there are real requests and needs that the governors in states have to respond to,” Robinson said. “As a nation, when responding to a worldwide pandemic in a federally declared emergency, I would think that the federal leadership would want to give the governors whatever they need in terms of trying to address this within the states.”