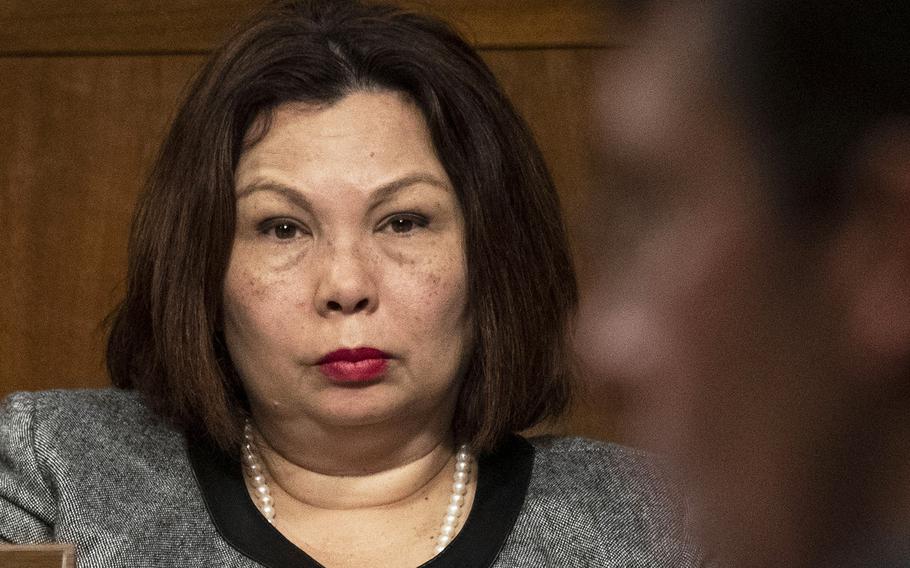 WASHINGTON — Sen. Tammy Duckworth, D-Ill., is demanding to know whether the Pentagon is investigating whether any American troops died in Afghanistan as a result of the bounties reputed to have been offered by Russia to attack them.

“It is unacceptable that to date, the Trump administration appears to be ignoring a matter of great importance to Gold Star family members whose loved ones were killed while serving in Afghanistan: were any U.S. troop casualties in Afghanistan connected with the alleged [Russian military intelligence service] bounty payments to Taliban-linked militants?,” Duckworth wrote in a letter sent Thursday to Defense Secretary Mark Esper.

The New York Times first reported on June 26 that American intelligence officials had determined a Russian military intelligence unit secretly had offered bounties to Taliban-linked militants to attack American and coalition forces in Afghanistan and that it was believed some of the money had been collected.

Duckworth, a combat veteran, wants Esper to confirm whether the Pentagon is investigating whether any U.S. troop deaths in Afghanistan were related to the Russian bounties. She also wants him to say whether the Defense Department is “tracking any concurrent or completed” intelligence community investigations into military casualties in Afghanistan. Duckworth’s letter also asks whether Esper would commit to disclosing the findings of all investigations regarding the Russian-bounties program and American casualties with Gold Star families, Congress, and the public.

The New York Times also reported President Donald Trump and White House officials had known about the intelligence but had not decided to take any steps in response.

Following the news reports, the White House has defended its actions, with Press Secretary Kayleigh McEnany telling reporters on June 29 that “there is no consensus within the intelligence community on these allegations” and Trump never was briefed on the intelligence because it would have to be verified in order for the matter to be brought to him.

Marine Gen. Kenneth McKenzie, the commander of U.S. Central Command, said Tuesday that the intelligence was “very worrisome,” but he was not convinced any bounties resulted in the deaths of American troops, The Associated Press reported.

Rep. Adam Smith, D-Wash., the chairman of the House Armed Services Committee, told reporters following one of the briefings June 30 that there “was clearly evidence that the Russians were paying the bounties as described.”

Rep. Jim Banks, R-Ind., a Navy Reserve officer who served in Afghanistan, took to Twitter after he had attended a White House briefing June 29 and he wrote he learned that The New York Times “used unconfirmed [intelligence] in an ONGOING investigation into targeted killing of American soldiers.” He added the investigation is now “impossible to finish” because of the news reporting.

Thursday’s letter is the latest action by the senator in response to the reports regarding the intelligence assessments. Duckworth also requested in June that the Senate Armed Services Committee hold a public hearing on the intelligence.