DOD, VA stop use of Johnson & Johnson vaccine due to safety concerns 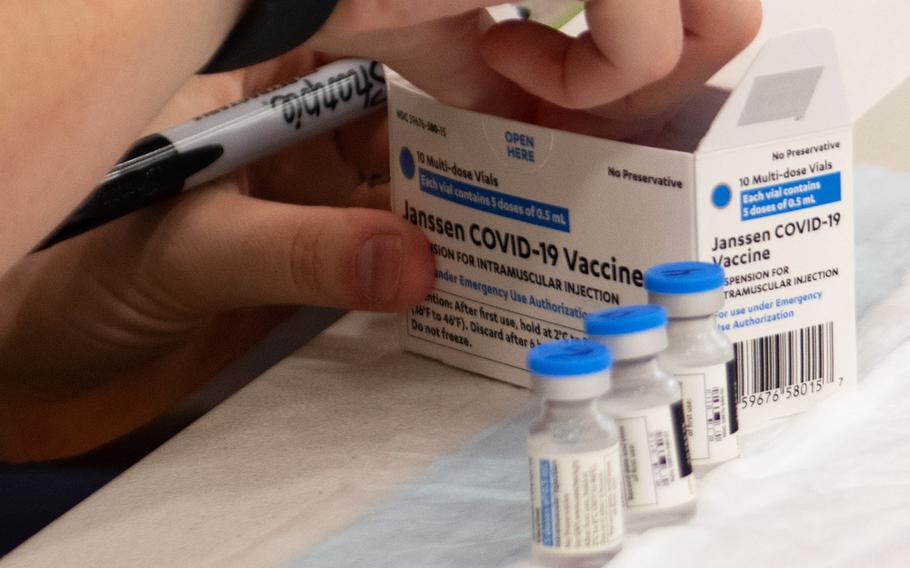 An airman from the 18th Medical Group numbers vials of the Janssen coronavirus vaccine, commonly known as the Johnson & Johnson vaccine, at Kadena Air Base, Japan, on April 13, 2021. (Yosselin Perla/U.S. Air Force)

WASHINGTON — The Defense Department and Department of Veterans Affairs are immediately halting its use of the single-dose Johnson & Johnson coronavirus vaccine following concerns of rare blood clots, officials announced Tuesday.

“The safety of our force and their families is a top priority for the department. We are communicating this pause to our military health facilities and are reviewing our global vaccine distribution to address this issue and ensure we can continue to provide vaccines to our DoD population at home and abroad,” John Kirby, the chief Pentagon spokesman, said in a statement Tuesday.

The pause comes at the recommendation of the U.S. Food and Drug Administration and the national Centers for Disease Control and Prevention. The agencies are investigating unusual clots that occur six to 13 days after the vaccination, The Associated Press reported.

The Department of Veterans Affairs also announced Tuesday that it was pausing the administration of the Johnson & Johnson vaccine. People who had appointments to receive the vaccine through the department will be rescheduled to receive either the Moderna or the Pfizer vaccine, according to a statement.

The agencies are investigating six cases of women between the ages of 18 and 48 who had the clots after receiving the Johnson & Johnson vaccine, and one death is under investigation, according to the AP. The case numbers are small compared to the more than 6.8 million doses of the vaccine that have already been administered in the United States, with most having no or mild side effects.

The military had been prioritizing the use of the Johnson & Johnson vaccine for overseas locations because of its single-dose and not requiring the ultra-cold storage necessary during shipping as do some of the other coronavirus vaccines. This pause is the latest setback for Defense Department’s use of the vaccine. Last month, it was reported that 15 million doses of the Johnson & Johnson vaccine were contaminated and shipments had to be delayed, according to defense officials.

“At this time, we do not know how long the pause will last. We will continue to communicate to the force as we learn more,” Kirby said.

Johnson & Johnson has stated it is aware of the blood clot reports but there is no established link to their vaccine, the AP reported. Still, the rollout of the vaccine in Europe has been delayed as a precaution, the company said.

There have also been reports from Europe that the AstraZeneca vaccine, which has not been approved in the U.S., has caused a similar rare clotting disorder. The vaccine is made with a similar technology as the Johnson & Johnson vaccine, but each uses different materials to train the immune system to go after the coronavirus, according to the AP.