DOD budget proposal cuts all funding to Stars and Stripes; lawmakers, others back news organization 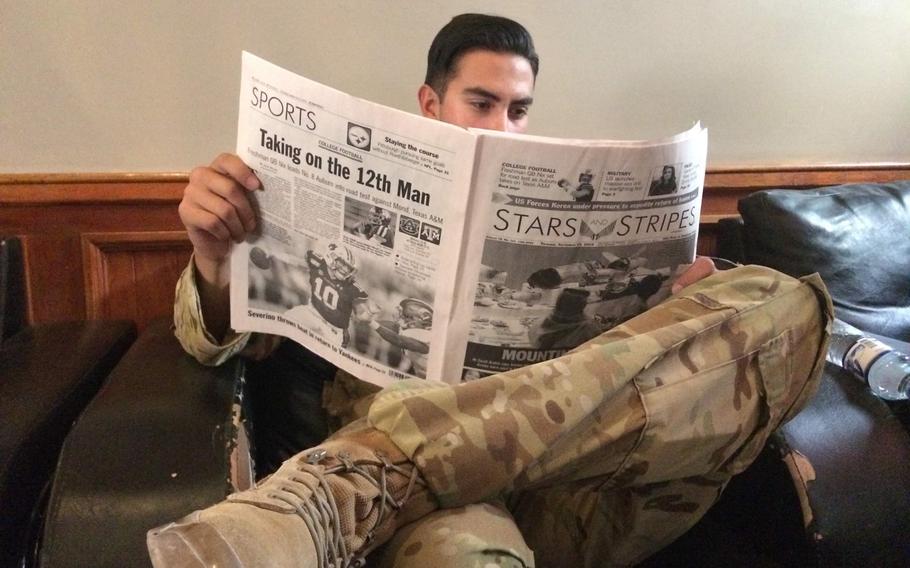 WASHINGTON — The Pentagon’s fiscal year 2021 budget request would strip Stars and Stripes of all its federal funding, more than $15 million annually, a Defense Department official said Wednesday, as lawmakers and others defended the editorially independent news organization.

The budget request unveiled Monday seeks to cut all of Stars and Stripes’ DOD funding — about $15.5 million per year, which the Pentagon wants to reinvest in functions that it considers more critical for warfighting, said Marine Lt. Col. Chris Logan, a spokesman for Deputy Defense Secretary David Norquist. Stars and Stripes receives about $8.7 million annually in operations and maintenance funds and about $6.9 million in contingency operations funds to support news reporting in places such as Afghanistan and Iraq.

Pentagon officials on Monday confirmed the budget request would cut at least some funding to Stars and Stripes, but they declined to provide monetary figures attached to the proposal. Stars and Stripes’ leadership was informed of the proposed cuts by Pentagon leadership also Monday, after the Wall Street Journal reported the news organization was eyed for a funding reduction.

Stars and Stripes first appeared during the Civil War, and it has been continuously published since World War II. It produces daily newspapers for U.S. military troops across the world and a website, which is updated with news 24 hours a day. Though it is part of the Pentagon’s Defense Media Agency, Stripes retains its editorial independence and is congressionally mandated to be governed by First Amendment principles.

Logan’s statement Wednesday acknowledged Stars and Stripes’ value during its seven decades of continuous service to the U.S. military community.

“Their hard work and dedication in reporting on issues that matter the most to the military community continues to be of value,” he said. “However, as we look forward to the current budget proposal and beyond, the DOD must prioritize spending to support our warfighters in the most critical areas of need. Therefore, the department has made the difficult decision that, beginning in fiscal year 2021, it will no longer provide appropriated funds to Stars and Stripes.”

The news organization’s value to American troops’ has been proven, said Ernie Gates, Stars and Stripes’ ombudsman. He said the newspaper not only provides service members “a little piece of home” or a “welcome diversion” from tough missions, but it also provides independent, free-flowing information that they need to exercise their rights as Americans.

The proposal has received pushback from varying directions, including a former commander, lawmakers and a key journalism advocacy and education organization, the Society of Professional Journalists.

SPJ called on Defense Secretary Mark Esper to rethink the funding cut to Stars and Stripes, which it said would be “a huge disservice to the men and women who serve our country” who rely on the physical newspaper in areas where they cannot access the internet.

“Since it was first published during the Civil War, Stars and Stripes has been a balanced and objective source of information for members of the military,” SPJ National President Patricia Gallagher Newberry said Wednesday in the statement. “Its ability to inform troops about issues important to them must not be hindered.”

“Stars & Stripes was a link to home when I was in Iraq and Okinawa,” wrote Gallego, a Marine veteran. “It’s an A+ indie take on everyday DoD news, f*** ups, and Administration & General Officer BS. No wonder this President wants to cut it. He’s got a fight on his hands.”

Cisneros, a Navy veteran, wrote Stars and Stripes “provides a crucial voice on the DOD, VA, and other military matters.”

“We need their reporting,” he tweeted.

Other members of Congress reached this week for comment said they needed to take a close look at budget documents before speaking. One member expected to be briefed on the Stars and Stripes funding proposal this week.

In an email, a former top commander of American and NATO troops in Europe defended Stars and Stripes.

“Every day in my office as commander [of] U.S. European Command, I would read Stars and Stripes,” said retired Navy Adm. James Stavridis, who served as EUCOM chief and NATO Supreme Allied Command from 2009 to 2013. “It was an invaluable, unbiased, and highly professional source of information which was critical to me in my role overseeing U.S. military throughout Europe.”