Documentary explores 'The Burden' fossil fuel has on US military 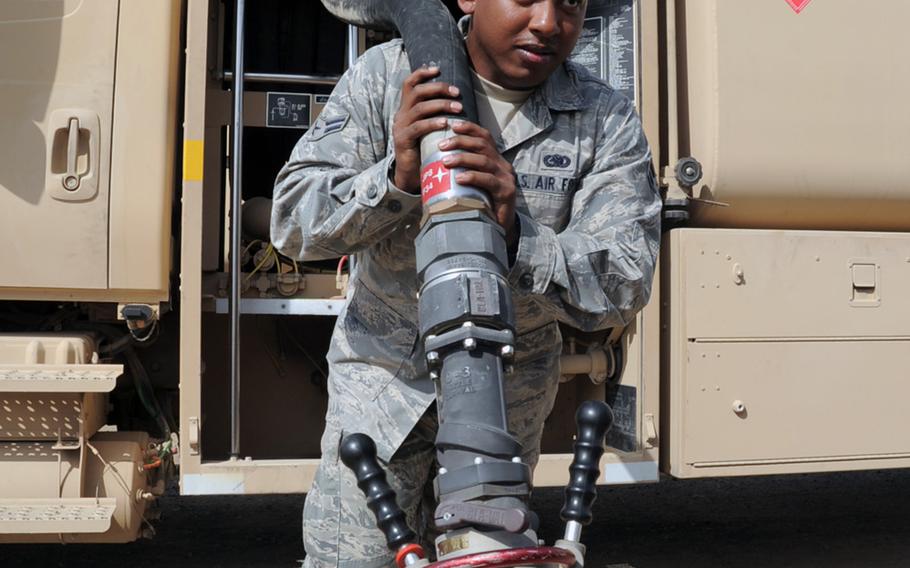 The weight of fueling the United States military is literally borne by a host of servicemembers. The documentary film ''The Burden'' looks at the costs of carrying the weight of fossil fuels and how that burden affects national security. (Jenifer Calhoun/U.S. Air Force)

The weight of fueling the United States military is literally borne by a host of servicemembers. The documentary film ''The Burden'' looks at the costs of carrying the weight of fossil fuels and how that burden affects national security. (Jenifer Calhoun/U.S. Air Force) 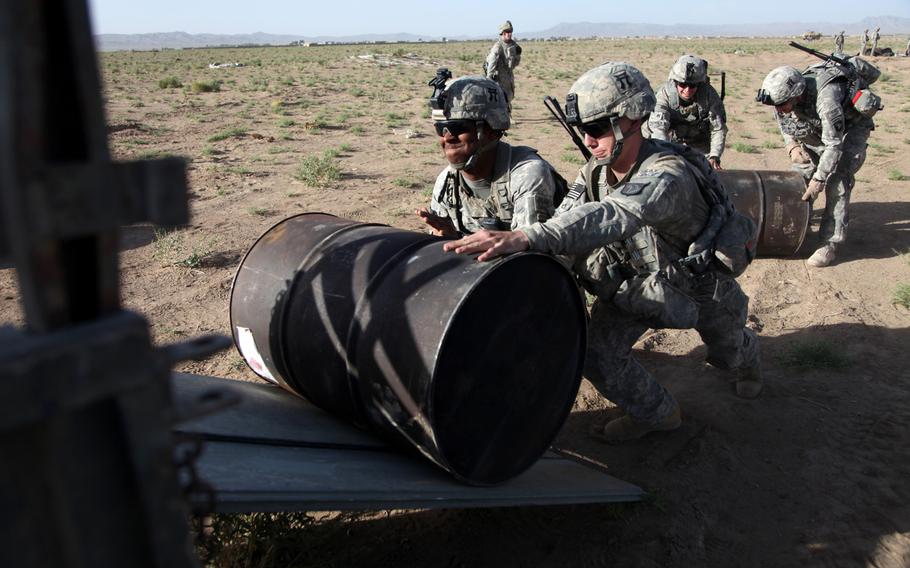 U.S. soldiers roll barrels of fuel onto a truck during a fuel drop at Forward Operating Base Waza Kwah, Paktika Province, Afghanistan, in July 2010. According to a new documentary film, ''The Burden,'' the annual cost for the U.S. to guard the world?s shipping ''chokeholds'' - Turkish Straits, Suez Canal, Strait of Hormuz and Strait of Malacca - is $85 billion. (Jeffrey Alexander/U.S. Army) 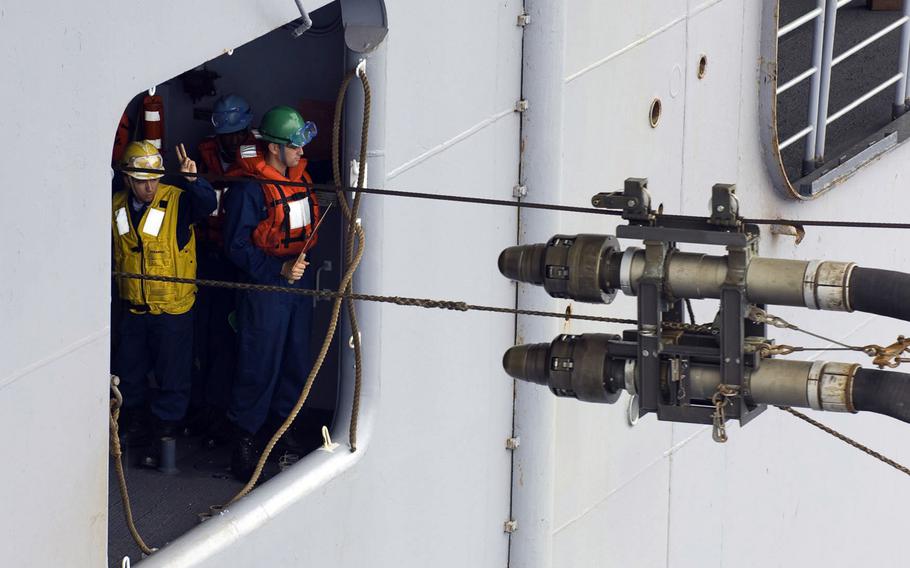 If there’s one image that lingers after viewing the documentary “The Burden,” it’s the ubiquitous shots of troops — from every service in every theater — trudging around with massive fuel hoses over their shoulders.

The film underscores where the military finds itself as the new century begins: Liquid petroleum is its lifeblood, but those fuel lines are an oppressive tether.

That lugging image is no accident, said Roger Sorkin, writer and director of the 40-minute film, which has received support from the Truman National Security Project and makes its world premiere Friday at the Environmental Film Festival in Washington, D.C., at the Navy Memorial Heritage Center Theater.

As he scoured the military’s photo and video archives, he kept seeing images of servicemembers refueling vehicles, ships and aircraft.

“Whether on ship or land, there’s always a person required,” Sorkin said. “Anytime it’s an aircraft or truck, there’s always someone who has to pull a really heavy hose over his or her shoulder. Often it’s a crew.”

For Sorkin, the image took on iconic meaning, this army of mythological Sisyphuses endlessly pushing boulders up hills.

“It’s physical, manual labor, so I thought it was the best image to use, as a metaphor, to illustrate the kind of effort the military as a whole expends to get its fuel to conduct its missions.”

And that burden, according to retired and active-duty servicemembers who appear in the film, must be lifted for the sake of national security.

“The thrust of the documentary is to present the issue of how burdensome it is and the fact that the military is looking at alternatives and the need for alternatives, which make us far more expeditionary, far more light,” said Anthony Zinni, a retired Marine Corps general and former commander of U.S. Central Command who appears in the film.

“Speaking as somebody who obviously commanded large-scale forces in the military, the largest requirement logistically for us is to move fuel — the amount of lift it takes, the tactical lift once you’re on the ground, the distribution system you need. Fossil fuel to keep a large force going is really a tremendous burden, as the title implies. Anything you could do to find alternative sources of fuel that would lessen that burden and weight, I think has great appeal to the military.”

And keeping that petroleum moving around the world aboard ships safely and efficiently is part the U.S. military’s mission — and part of that burden.

In the film, Commander Blake McBride, with the Navy’s Task Force Climate Change, describes the circular — and ultimately illogical — mission to keep the oil flowing.

“One of the reasons we’re in the Persian Gulf is to maintain the stability of oil,” McBride says in the film. “If that’s a resource we might have to get from countries that aren’t necessarily friendly to the United States, that’s a strategic vulnerability.”

The annual cost for the U.S. to guard the world’s shipping “chokeholds” — Turkish Straits, Suez Canal, Strait of Hormuz and Strait of Malacca — is $85 billion, the film notes.

Talk of moving away from fossil fuels to alternative sources is met with resistance and skepticism by many conservatives, so Sorkin said he strived to make a “non-ideological” film in order to reach people who have been reluctant to embrace clean energy policy and technology.

One of the most effective voices in the film belongs to Greg Ballard, a former Marine Corps lieutenant colonel who retired in 2001 after serving 23 years. He is now mayor of Indianapolis.

“What’s holding us back is that so many of the conservatives — of which I am clearly one — do not see the consumption of oil as a national security issue,” Ballard says in the film. “Well, if you’ve been in war in the Middle East, as I have, I suggest you might see that differently.”

The film underscores that ideological resistance with a brief scene of Rep. Randy Forbes, R-Va., chiding Secretary of the Navy Raymond Mabus during a hearing about giving too many policy speeches on the priority of alternative energy sources for the Navy.

Military commanders, however, have long connected the dots between energy and national security, Sorkin said.

“The commanders on the ground, in the air and everywhere are talking about this, and they’ve been crying out for years for alternatives to oil, for many reasons -- for operational reasons, for strategic reasons, for tactical reasons, for geopolitical big-picture reasons,” Sorkin said.

His hope is that the film can provide political cover to elected officials who might be reluctant to take a stand on alternative energy for fear of upsetting fossil-fuel special interest groups.

“This gives them the cover to say, ‘I support the troops so much that now I’m supporting the troops by giving them the energy solutions they need.’”

As the Navy’s McBride says in the film: “If you want an ‘off-ramp’ from petroleum, you have to investigate alternatives.”