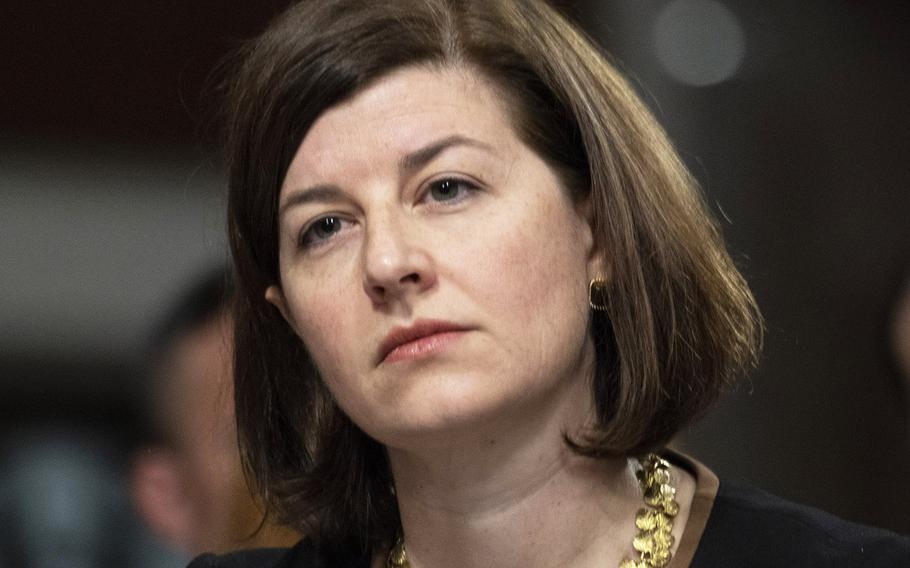 Elizabeth A. Field, director of defense capabilities and management for the Government Accountability Office, listens during a hearing on privatized military housing, December 3, 2019, on Capitol Hill. (Stars and Stripes)

Data collected to determine the satisfaction of residents living in privatized military housing and the health of the homes available to them was deemed unreliable and potentially misleading by a Government Accountability Office report released Tuesday.

The Defense Department used the data in reports to Congress and to determine whether the 14 private companies managing base housing were eligible for bonus payouts.

The report — titled “Military Housing Privatization: Preliminary Observations on DOD's Oversight of the Condition of Privatized Military Housing” — is part of ongoing research by the GAO. A final report, expected in early 2020, could offer recommendations on improving privatized military housing.

The research followed a Reuters news report last year spotlighting the living conditions that some military families face when choosing on-base housing. Stories of houses filled with mold, rodent infestations and lead paint have led Congress to take a hard look at the partnership between the military and the private companies that manage 99% of base housing in the United States. Top officials at five private companies managing military housing will testify Thursday before the readiness subpanel of the House Armed Services Committee.

On Tuesday, Field used her opening statement at the Senate hearing to describe how the GAO uncovered the misleading on-base housing information given to Congress.

In May 2019, the Office of the Secretary of Defense released information that stated 87% of privatized housing residents were satisfied based on annual survey results from 2017, according to the GAO report. Field said she began examining the statistic and she realized it was “not in any way reliable” because of how the survey question was worded.

The secretary’s office directed the services to ask residents “Would you recommend privatized housing,” with available responses of “yes,” “no” or “don’t know.” Instead, residents were asked on a scale of zero to five whether they agreed with the following statement: “I would recommend this community to others.”

Each branch of service then used different methods to match the six response options that residents provided to the three answers directed by the secretary’s office. Residents responding with a “3” to the Navy’s survey were matched with “don’t know,” while Air Force residents with the same answer were matched with “yes.”

“However, through our site visits where we conducted 15 focus groups with families, we learned that family members choose to live in privatized housing for reasons that have nothing to do with the housing itself,” Field said. “Reasons such as living in close proximity to medical and education services for children with special needs or a concern that off-base housing is neither affordable or safe.”

As part of her research, Field collected more than 8 million work orders from the 14 private housing companies from October 2016 to May 2019 to try to determine the quality of houses on military bases.

“Our hope was that we could use this data to determine the hazards, to see patterns over time and to assess the timeliness of maintenance conducted on the homes,” she said. “Unfortunately, we found that because the data in these records are not captured reliably or consistently, they cannot be used to do so.”

Among other problems, Field found duplicate work orders and work orders with completion dates prior to when the resident submitted the request.

Aside from providing this data to Congress, the military also used the information to determine whether the private companies had earned performance incentive fees. The secretaries of the Army, Navy and Air Force said Tuesday that they are rewriting the determining factors of incentive fees.

“We’re looking at those very, very carefully to understand whether or not they’ve earned them,” he said.