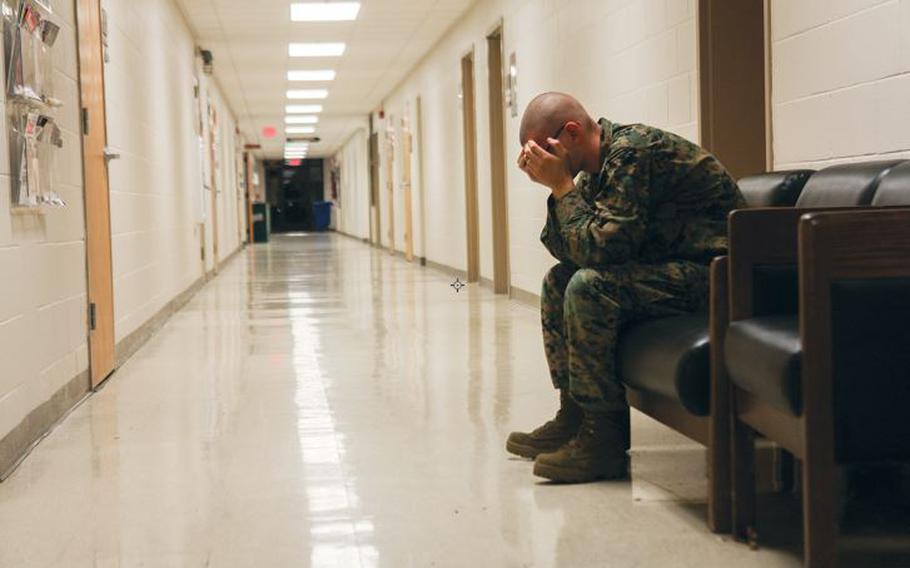 The 2018 Department of Defense Suicide Event Report, released Monday, April 27, 2020, presents data collected by the services about suicides and suicide attempts among service members during that calendar year. The data included 139 suicides in the Army, 60 in the Air Force, 68 in the Navy and 58 in the Marine Corps. (Sarah Cherry/U.S. Marine Corps)

Army and Marine Corps infantry and gun crews, Air Force service and supply handlers and Navy electricians or mechanics are among the military jobs that had the highest numbers of suicides in 2018, according to an analysis released Monday.

The Department of Defense Suicide Event Report presents data collected by the services about suicides and suicide attempts among service members during the 2018 calendar year.

“There were 325 deaths by suicide identified among active-component service members,” the report states.

The data included 139 suicides in the Army, 60 in the Air Force, 68 in the Navy and 58 in the Marine Corps, according to the report.

The military jobs that had the highest number of suicides in each service in 2018 were:

— Navy electrical/mechanical equipment repairers, with 13 suicides, or 19.4% of the service’s total.

— Air Force service and supply handlers, with 10 suicides, or 20.8% of the service’s total.

“The suicide mortality rate was 24.8 deaths per 100,000 population,” wrote analysts with the DOD Psychological Health Center of Excellence who authored the report.

Some of the data analyzed in the report was released by the Pentagon in September in its first-ever Annual Suicide Report.

At that time Karin Orvis, director of the Defense Suicide Prevention Office at the Pentagon, said the rates were not where leaders wanted them to be.

“They’re not in the direction that we want them to be going,” she said. “We take this extremely seriously in our department, and it is a top priority” for Defense Secretary Mark Esper.

When last year’s report was released, Esper told reporters he wished he could say the department had “an answer to prevent further, future suicides.”

“We don’t,” he said. “We are caught up in what some call a national epidemic of suicide among our youth. And not just our youth, but it’s something we continue to wrestle with. I believe we have the means and the resources to get ahead of this and do better than our civilian counterparts.”

After accounting for differences in age and sex between the military and general U.S. populations, the 2018 suicide rates for both the active and reserve components were statistically no different from the 2017 U.S. adult population rate, according to Monday’s report.

“In contrast, the [2018] suicide rate for the National Guard was significantly higher than the U.S. adult population rate,” the report states.

Personal firearms accounted for 66.5% of military suicides in 2018. Overdose by drug and/or alcohol was the most common method of attempted suicide, accounting for 59%, the report states.

Less than half, or 44.6%, of troops who died by suicide in 2018 had a documented behavioral health diagnosis, the report states.