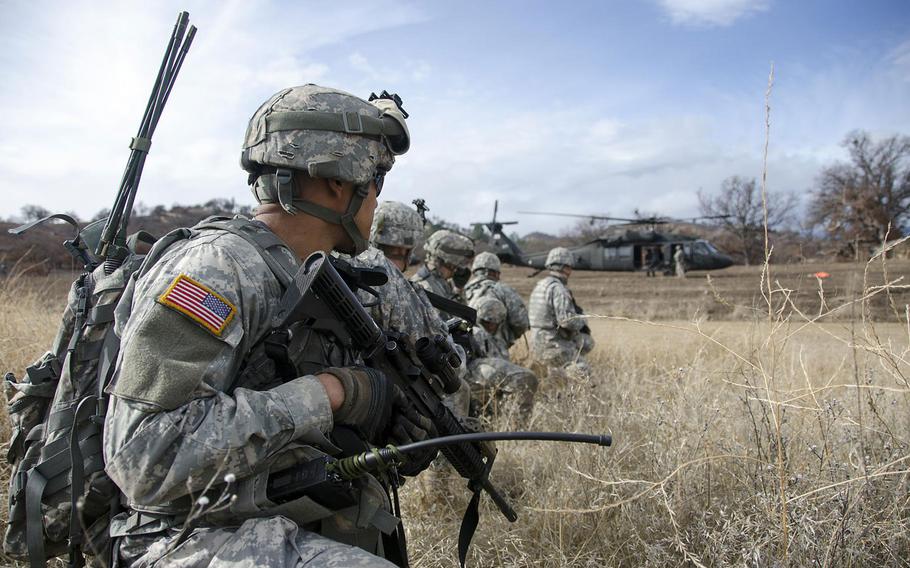 Soldiers of the California National Guard's 40th Infantry Division rehearsing an air assault mission at Fort Hunter Liggett in 2014. The Los Angeles Times/Tribune Washington Bureau reported this month, that the Pentagon has been demanding repayment of enlistment bonuses — which often reached $15,000 or more — from thousands of California Guard soldiers, many of whom had served multiple combat tours in Iraq and Afghanistan. (Benjamin Cossel/U.S. National Guard)

Soldiers of the California National Guard's 40th Infantry Division rehearsing an air assault mission at Fort Hunter Liggett in 2014. The Los Angeles Times/Tribune Washington Bureau reported this month, that the Pentagon has been demanding repayment of enlistment bonuses — which often reached $15,000 or more — from thousands of California Guard soldiers, many of whom had served multiple combat tours in Iraq and Afghanistan. (Benjamin Cossel/U.S. National Guard) 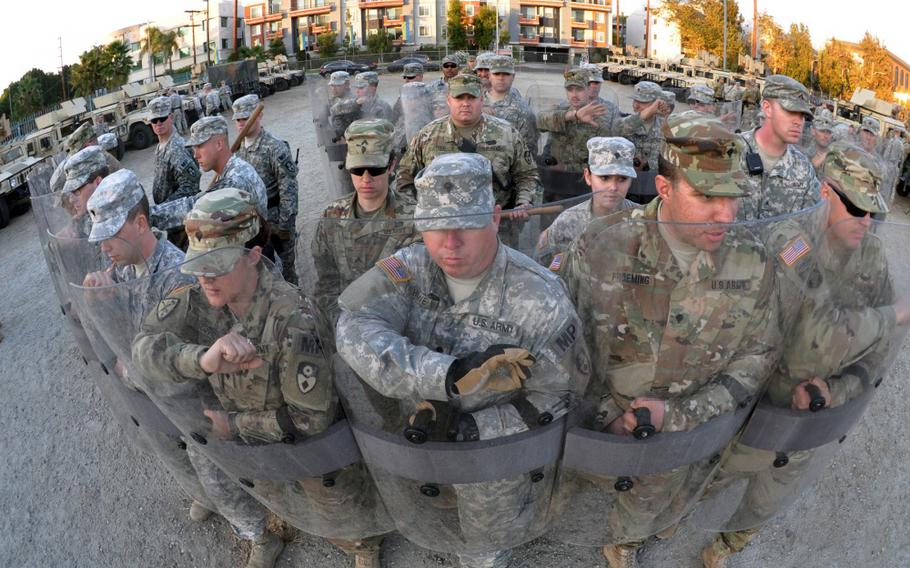 The House and Senate lawmakers could vote within days on a National Defense Authorization Act that requires a review all cases of recoupment in the state between 2004 and 2015 and give a waiver unless it can prove a soldier “knew or reasonably should have known” they were ineligible for the benefit.

Meanwhile, the House Armed Services Committee is calling top National Guard officers and Pentagon officials to testify Dec. 7 on the recoupment of bonus and education benefits.

The California National Guard sparked public outrage in October for pursuing recoupment of bonuses worth $15,000 or more from about 9,700 soldiers who had re-enlisted during the wars in Iraq and Afghanistan as part of the service’s effort to boost troop numbers.

California lawmakers had pressed for some financial relief for troops be added to the National Defense Authorization Act, a sprawling piece of legislation that sets defense policy for the coming year. A group of more than 100 House members – mostly Democrats – also sent a letter to the chamber’s leadership asking they move quickly to pass a law giving troops some relief from repaying the money.

The proposed NDAA bill unveiled by lawmakers this week states the Guard should review all California recoupment cases by July and “shall evaluate the evidence in a light most favorable” to soldiers who have repaid bonuses or are facing repayment, according to a copy of the bill obtained by Stars and Stripes.

The bill must still pass Congress and a vote in the House is expected this week followed by a final vote in the Senate next week. Before becoming law, it must also be signed by President Barack Obama.

A waiver should be granted “unless the board makes an affirmative determination, by a preponderance of the evidence, that the member knew or reasonably should have known that the member was ineligible for the bonus pay, special pay, student loan repayment, or other special payment otherwise subject to recoupment,” according to the bill.

The change could remove some of the burden from soldiers fighting recoupment efforts.

The Defense Department would have to help wipe clean any bad credit ratings related to waived cases by contacting credit reporting agencies and telling them the debt was invalid.

The bill also calls for new military-wide protections for soldiers and retirees in such cases. The Defense Department would not be allowed to garnish wages or retirement pay of servicemembers who unknowingly received any overpayments unless the recollection effort is done within 10 years.

Audits of recoupment cases and reports to Congress would be required annually during the next decade.

Congress could have a full report on the California bonus repayments by August, if the NDAA passes.

However, the House Armed Services Committee will look more closely at the issue next week.

Lt. Gen. Timothy Kadavy, director of the Army National Guard, and Major Gen. David Baldwin, the adjutant general of the California National Guard, are set to testify to the committee about the bonuses, along with Peter Levine, who is performing the duties of the undersecretary of defense for personnel and readiness.

In October, the Pentagon temporarily halted the collection of the bonus payments, which were estimated to be worth $40-$50 million. Defense Secretary Ash Carter said he was aiming to review and resolve all the cases by July.

The Army National Guard began paying re-enlistment bonuses in 2004 and in 2012 auditors discovered fraud in California, triggering years of efforts to reclaim the payments.

Some soldiers and veterans said repayments can add up to hundreds of dollars per month and the service has used aggressive debt-collecting techniques.