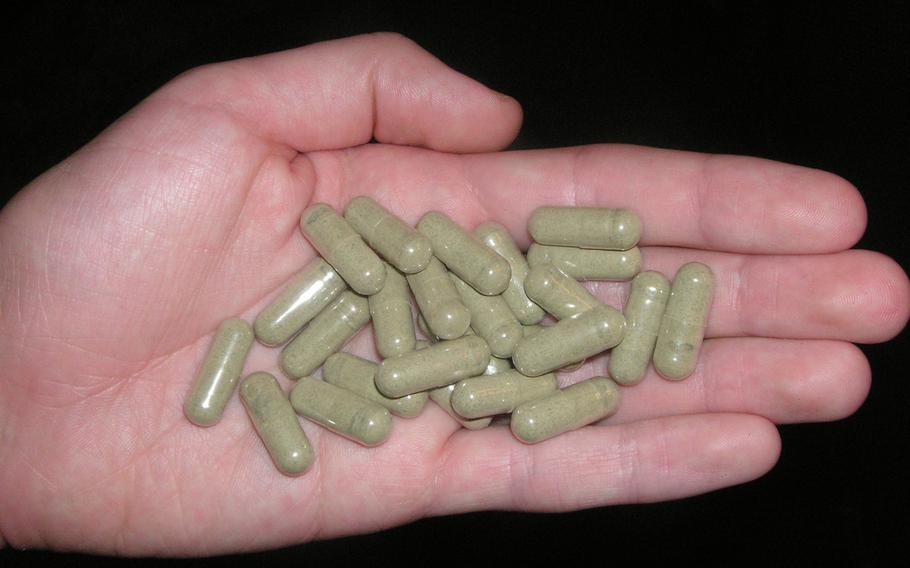 Kratom, which originates in Southeast Asia, has become more widespread in the United States and is a popular substance used by veterans suffering from PTSD. (via Wikimedia Commons)

WASHINGTON — The Drug Enforcement Administration has received a torrent of backlash from patients with chronic pain and former opiate users after announcing plans to ban kratom, a plant gaining popularity across the United States for its opiate-like effects.

Kratom, which originates in Southeast Asia, has become more widespread in the United States in the past decade, fueled by online testimonials from users and a lack of federal regulation. Advocates say the plant - typically crushed and mixed or brewed with water - poses few health risks while helping users relieve severe pain and overcome addictions to powerful prescription painkillers.

A DEA spokesman told The Washington Post that the agency has received a surprising number of comments about the ban and could ease the restrictions after further research.

The Food and Drug Administration began seizing some kratom shipments from overseas in 2014. This summer, the Centers for Disease Control and Prevention reported that annual calls to poison-control centers related to kratom use jumped from 26 in 2010 to 263 in 2015. States have been quietly banning the substance: Alabama and Arkansas outlawed it earlier this year, joining four others — Indiana, Wisconsin, Vermont and Tennessee — according to the American Kratom Association.

The DEA recently announced a temporary federal ban on kratom beginning Sept. 30. The active chemicals in the plant will be placed on Schedule 1 of the Controlled Substances Act, the most restrictive regulatory category, designated for substances with no medical use and a high potential for abuse.

"The placement of these opioids into schedule I of the Controlled Substances Act is necessary to avoid an imminent hazard to the public safety," the DEA wrote in the Federal Register. The agency's notice cited reports of 15 deaths linked to, though not necessarily attributable to, kratom use between 2014 and 2016.

The ban would automatically sunset after two years unless the DEA acts, and spokesman Melvin Patterson said he could see the agency moving kratom from the highly restrictive Schedule 1 to the less-restrictive Schedules 3 to 5, reserved for minimally addictive drugs with accepted medicinal use.

"I don't see it being Schedule 2 [or higher] because that would be a drug that's highly addictive," he said. "Kratom's at a point where it needs to be recognized as medicine. I think that we are going to find out that probably it does."

He cautioned that research would be necessary to know for sure how to best regulate the drug, and it's safest to put kratom on Schedule 1 in the meantime. Still, Patterson noted that public response to the ban has been overwhelming.

"That was eye-opening for me personally," he said. "I want the kratom community to know that the DEA does hear them. Our goal is to make sure this is available to all of them." he said.

John Hudak, a drug policy expert at the Brookings Institution, says it's fairly common for the DEA to temporarily ban a drug and later ease the restrictions, often as a result of lobbying and research from pharmaceutical companies hoping to sell them. It's less common for a scheduled drug to be removed from the list of controlled substances altogether, but it does happen.

Still, Hudak said, the strict scheduling of kratom would make it harder for researchers to access the drug, which could limit the very research that the DEA says is necessary to determine whether it has medical benefits.

"A lower scheduling might actually spur that type of research for these natural substances," Hudak said. "It's not necessarily going to happen under Schedule 1."

Kratom has been used in the Southeast Asia for recreational and medical purposes for centuries, according to a 2011 report from the Transnational Institute, a research and advocacy organization. Traditionally, people in the region chewed it to produce a mild stimulant effect, similar to coffee.

At stronger doses, the plant's effects mimic those of opiate drugs: A 2015 review of users' self-reported experiences with the drug found that "kratom users reported relaxation, a sense of well-being and pain relief, along with typical opiate side-effects, including upset stomach upset, vomiting, itching, and mild sedation," the researchers wrote in the Journal of Psychoactive Drugs.

Over the past decade, the recreational use of kratom has become more popular in Western countries, spurred largely by mentions of the plant in online forums where users share their experiences using various drugs. The lack of federal restrictions on the drug has facilitated the growth of a small industry of U.S.-based retailers who import it from overseas and sell it online or in head shops.

The drug has become popular enough that a non-profit group, the American Kratom Association, was founded in 2014 to represent kratom users and educate the public on the drug and its effects.

Some researchers say that the DEA's reasoning for the ban is shaky and that cracking down on kratom could push users to more dangerous and addictive opiates.

The people using kratom are often "in pain or addicted" to other drugs, said Marc Swogger, a clinical psychologist at the University of Rochester Medical Center, who has published research on kratom use. "Those are two groups that need options for improving their situations. Without those options, I'm not sure what they're going to do. Will they begin to take heroin? Will they show up for treatment and get the appropriate treatment?"

Moreover, Swogger says, the DEA's own data "do not indicate there is any public health reason for this."

In a paper last year, Swogger and co-authors wrote that, in all of the fatal overdose cases involving kratom, the users had either taken other drugs, too, or had a history of alcohol or heroin abuse that also could have caused or contributed to the death.

"We just don't know" what actually caused the kratom-related deaths, Swogger said in an interview.

"The research indicates that this is a pretty mild substance," he said. "Criminalizing kratom use is insane to me."

Melvin Patterson, the DEA spokesman, said in an interview that one of the deaths was directly attributable to kratom alone — a 36-year-old man who died in Colorado in 2013. His family told local media he was using the drug to combat anxiety and became addicted. Relatives said he showed no signs of being sick.

Still, advocates for the drug say the research that has been done shows that kratom's effects are mild compared to opiate painkillers, and say that the plant has helped many people kick dependencies on hydrocodone, oxycodone and other powerful prescription painkillers.

Kratom has helped "millions of people suffering chronic and acute mental and physical conditions," the American Kratom Association says. A fact sheet published by the group says that "today Americans use kratom for things like fatigue, pain, depression, anxiety, PTSD, to ease themselves off opiates and to help manage addiction." Much of the evidence for this comes from testimonials from the group's own members, as published research into kratom use is rare.

Domestically, kratom is often sold online by vendors based in the United States and overseas. Some deal in kratom exclusively, while others sell kratom along with other so-called natural supplements.

The drug is also commonly found in brick-and-mortar smoke shops across the United States. Because there's no regulation, the quality and purity of the product can vary widely.

Government surveys do not ask about kratom use, so there's no official tally of the number of users. Susan Ash, director of the American Kratom Association, estimated that between between 3 million and 5 million Americans have used the drug at some time in their lives, based on information from retailers.

"We are your neighbors," she said. "We are your everyday people. We are not people who should be turned into felons for consuming a plant."

On Tuesday, Ash and hundreds of advocates demonstrated at the White House in protest of the upcoming ban. More than 120,000 people have signed a petition asking the White House to stop the DEA ban.

Aaron Walker was one of them. He's a U.S. Navy veteran who now works for a kratom company called Eden's Ethnos. He began using the drug to deal with the symptoms of a back injury suffered while he was in the service.

"I went to the VA a year ago for my back. I couldn't walk," he said. "They gave me dilaudid, hydrocodone and oxycontin, and they gave me x-rays and then sent me on my way. That's all they do is just give you pills."

Walker says he prefers to self-medicate with kratom, which he calls "the only thing that mitigates the pain." Plus, he says, he's more comfortable using a natural drug instead of powerful synthetic opiates.

"The dangerous drugs are the ones that are being prescribed by doctors," he said.