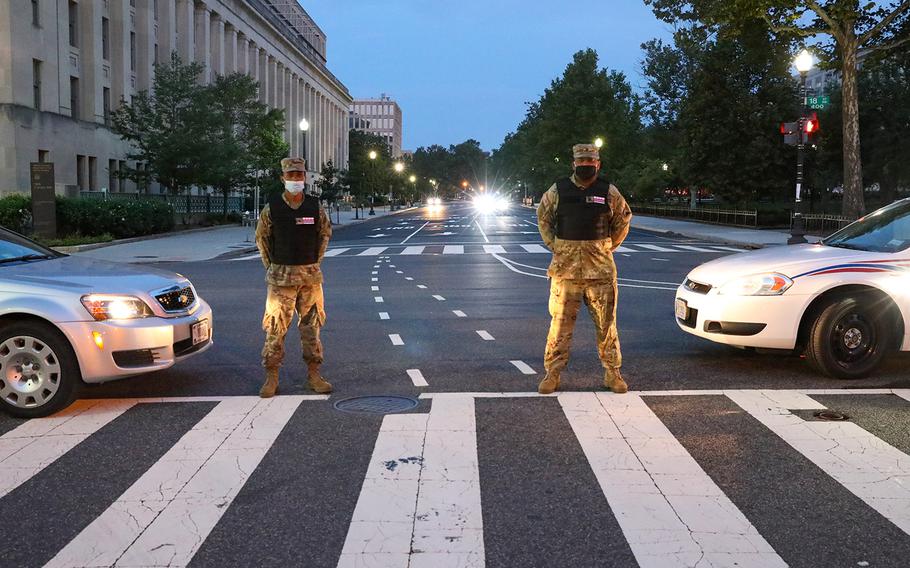 In an Aug. 28, 2020 photo, service members with the District of Columbia National Guard support local and federal agencies with march assistance in the nation's capital. Some 300 National Guard troops have been activated to help Washington police ensure order as thousands of President Donald Trump’s backers are expected to gather in the nation’s capital this week. (National Guard)

Some 300 National Guard troops have been activated to help Washington police ensure order as thousands of President Donald Trump’s backers were expected to gather in the nation’s capital this week to protest President-elect Joe Biden’s election win, defense and District of Columbia officials said Monday.

Mayor Muriel Bowser requested D.C. National Guard troops be activated to aid law enforcement in crowd and traffic control during the protests expected Tuesday and Wednesday, she said Monday during a news conference. Bowser and other city officials warned the crowds were expected to be larger than other pro-Trump demonstrations in Washington since the November election and they could become violent.

“We think it’s helpful to have our D.C. Guardsmen, our Guard that I have requested … to assist [the Metropolitan Police Department] with traffic management,” Bowser said. “That is how our D.C. National Guard can be helpful… It absolutely frees up more officers.”

Unlike state National Guards, which are commanded by governors, the D.C. Guard falls under the authority of the Army secretary, who approved Bowser’s request for the troops last week. More than 300 D.C. Guard members were activated to help in the protest response, but only about 100 are expected to be working on city streets at any given time, a defense official said Monday.

The D.C. Guard troops will not carry firearms or wear protective gear. No National Guard or active-duty troops from outside of Washington were expected to deploy in response to the protests, said the defense official who spoke on the condition of anonymity.

The new round of pro-Trump protests come as Congress meets Wednesday to certify the Electoral College results that concluded Biden won the presidency by a vote of 306-232. Some Republican senators and congressmen in recent days have vowed not to affirm those results, as Trump has repeatedly attacked the election results with unsubstantiated claims of fraud. Trump vowed to appear at one of the protest gatherings expected Wednesday morning at the Ellipse outside the White House.

Acting Metropolitan Police Chief Robert Contee said the Guard troops would work with police from Tuesday until protests die down at the end of “the lifecycle of this event.” He said the military troops would not have a direct role in quashing any violence, but their presence would free up police to respond.

“That will allow police officers to focus on anyone who is intent on instigating, agitating or participating in violence in our city,” Contee said. “That’s unacceptable, and we will not tolerate that.”

The roughly 1,300 troops in D.C. Guard have been busy in recent months. Several hundred members have been activated for months to help in coronavirus-related responses, and hundreds more were activated during large protests in the national capital during the summer following the May 25 killing of George Floyd by a Minneapolis police officer. D.C. Guard troops were augmented by some 3,300 additional National Guard forces from at least 10 other states deployed into the city during those demonstrations, which at times grew violent.