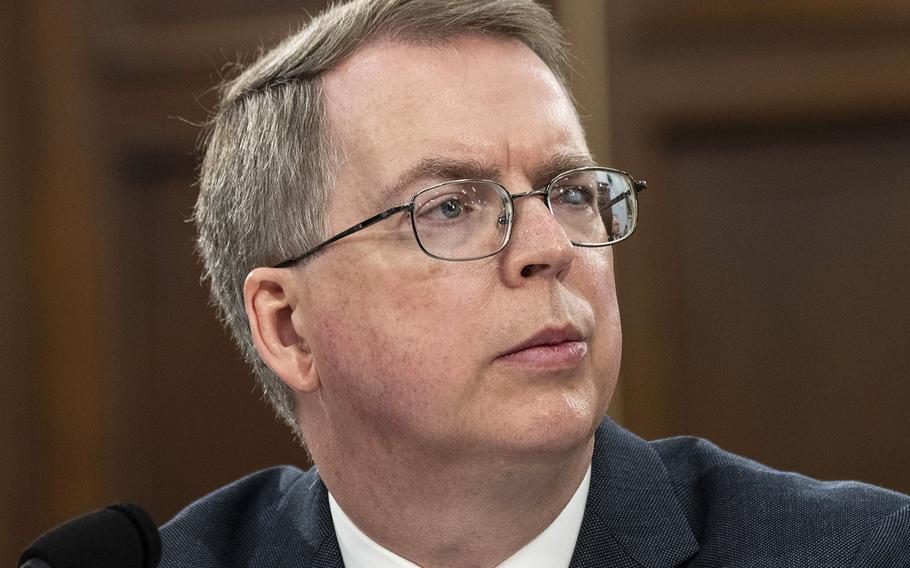 David Norquist, a Pentagon mainstay throughout former President Donald Trump’s term, was sworn in Wednesday as the acting defense secretary, taking over the Defense Department's top position until a permanent choice is approved by Congress.

Norquist, who has served as the Pentagon’s No. 2 civilian since July 2019, took over responsibility for the Defense Department shortly after President Joe Biden was sworn into office at the Capitol, Pentagon officials said. Before he served as deputy secretary of defense, Norquist served as the Pentagon comptroller — its top financial official — beginning in June 2017.

A longtime government finance official, Norquist previously served as an Army budget analyst, a House Appropriations Committee staffer, and in former President George W. Bush’s Homeland Security Department and Pentagon. As deputy defense secretary, Norquist has been responsible for the day-to-day business operations of the Defense Department, managing the Pentagon’s massive budget, and overseeing efforts to reform the military's acquisition and accounting practices.

Norquist avoided the spotlight during the Trump administration, surviving in the Pentagon as five men — two Senate-confirmed and three acting — served as defense secretary for Trump. Among his noted accomplishments, Norquist in 2019 guided the Pentagon through its first-ever audit.

Trump passed over Norquist for acting defense secretary when he fired Mark Esper shortly after his election loss in November. He instead picked Christopher Miller, a former Army Special Forces officer, to lead the Pentagon during his final weeks in office.

Austin retired from the military in 2016 after 41 years, and he requires Congress to waive a law mandating former military officers spend seven years out of uniform before they can become defense secretary. The House is expected to vote on the waiver Thursday, but the Senate has yet to schedule a vote on that issue or confirm Austin, who testified Tuesday before the Senate Armed Services Committee. It remains unclear whether Austin will receive the waiver, as several Democrats and Republicans in both chambers have said they will oppose it.

But Austin received a boost Thursday morning, when incoming Senate Armed Services Committee Chairman Jack Reed, D-N.H., announced he would support a waiver for Austin and vote to confirm him, if the measure is passed.

Biden has implored Congress to take up Austin’s waiver and confirmation as quickly as possible. Austin, if confirmed, would become the first Black defense secretary.

Miller’s short term as the Pentagon’s top leader saw him implement several consequential initiatives. Within mere days of taking office, Miller ordered and oversaw now-completed troop withdrawals from Afghanistan, Iraq and Somalia. The withdrawals, completed Jan. 15, leave Biden with 2,500 troops in Afghanistan, 2,500 in Iraq and few, if any, in Somalia, where the U.S. is supporting local troops fighting against the al-Qaida-aligned al-Shabab terrorist group.

Miller also ordered the Pentagon’s top civilian job directly oversee special operations forces, a role he briefly served in last year. In November, he ordered the assistant secretary of defense for special operations/low-intensity conflict now report directly to the defense secretary, which he said would effectively elevate U.S. Special Operations Command to the same level as the Pentagon’s military departments.

Miller completed several domestic trips and visited allies overseas during his short tenure, completing trips to the Middle East, Afghanistan, Europe and a brief stop to visit troops in Horn of Africa nations, Djibouti and Somalia.

During his last trip as acting defense secretary to U.S. Northern Command in Colorado last week, Miller told reporters traveling with him he was looking forward to leaving the Pentagon.

“I cannot wait to leave this job, believe me,” Miller said, in rare on-the-record comments to the media.

The Biden administration will also have Trump-era holdovers take on the roles of the three service secretaries in temporary, acting capacities. Biden has not announced who he plans to nominate for the positions of Army Secretary, Navy Secretary and Air Force Secretary.

Ryan McCarthy left his role as Army secretary Wednesday after speculation that he might be asked by Biden’s administration to remain in the Pentagon. In a note to the Army, McCarthy called serving as the service's top civilian since September 2019 “the highest honor” of his life.

“I have always strived to be the leader you deserve, not just in words but in deeds. I will continue to be an advocate for the Army team,” wrote McCarthy, a former Army Ranger and Afghanistan war veteran. “Thank you, be good teammates to one another, and my God bless you. I am immensely proud of you.”