Data on sexual assault in the military calls for a ‘hard look’ at review commission’s recommendations, Milley says 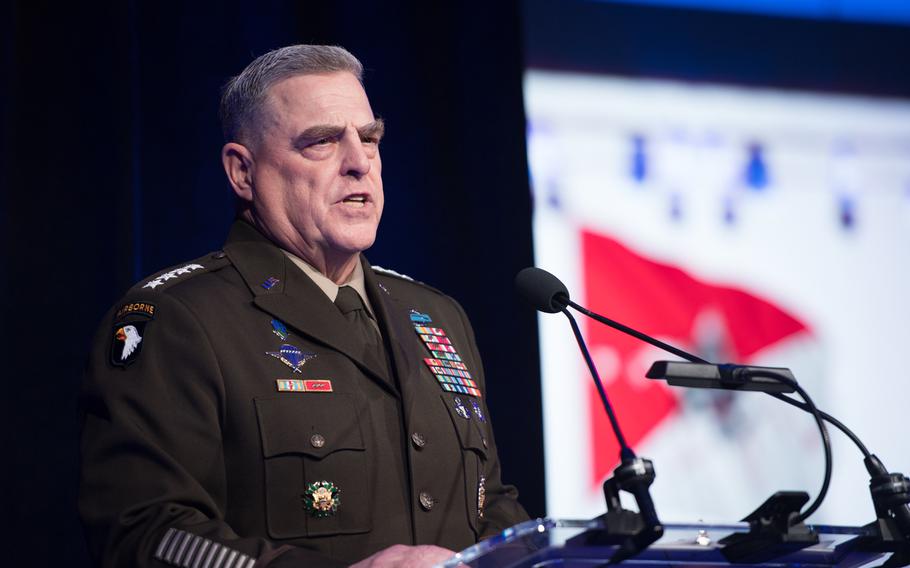 Army Gen. Mark Milley, chairman Joint Chiefs of Staff, speaks at the 2019 Army Birthday Ball in Washington, D.C., June 15, 2019. Milley said Thursday that new data about sexual assaults and command climates throughout the service softened his stance against changes to how the military prosecutes those cases. (Dana Clarke/U.S. Army)

WASHINGTON — Army Gen. Mark Milley, chairman Joint Chiefs of Staff, said Thursday that new data about sexual assaults and command climates throughout the service softened his stance against changes to how the military prosecutes those cases.

Milley told reporters at the Pentagon that his opinion was “significantly influenced” by recent data “about the confidence in the chain of command by junior soldiers — men and women alike — in their ability to deal successfully with sexual assault.”

“We have lost the trust and confidence of those subordinates in our ability to deal with sexual assault,” the general said.

The Defense Department estimates about 20,000 service members were sexually assaulted in 2020 based on “some pretty solid data” collected in recent surveys, Milley said.

“If we had 20,000 killed or wounded in Afghanistan or Iraq — those are casualties. That's huge, that's significant,” he said. “And that number hasn't significantly been reduced over time.”

Milley’s comments came days after he said he would drop his previous opposition to taking prosecution authority away from commanders in sexual-assault investigations.

An independent review commission’s initial report analyzing the Pentagon’s sexual-assault policies and procedures last month suggested removing the chain of command from sexual-assault investigations and immediately start the discharge process for service members credibly accused of such a crime, according to a report by The Associated Press last week.

The commission, ordered by Defense Secretary Lloyd Austin on Feb. 26, was given 90 days to conduct its analysis. The Pentagon has not yet received its completed report with its final recommendations, but Austin on Thursday said he would consult the services before deciding how to proceed.

Milley said he hoped the report would offer ways to “move in directions that are going to fundamentally change” sexual-assault rates in the military.