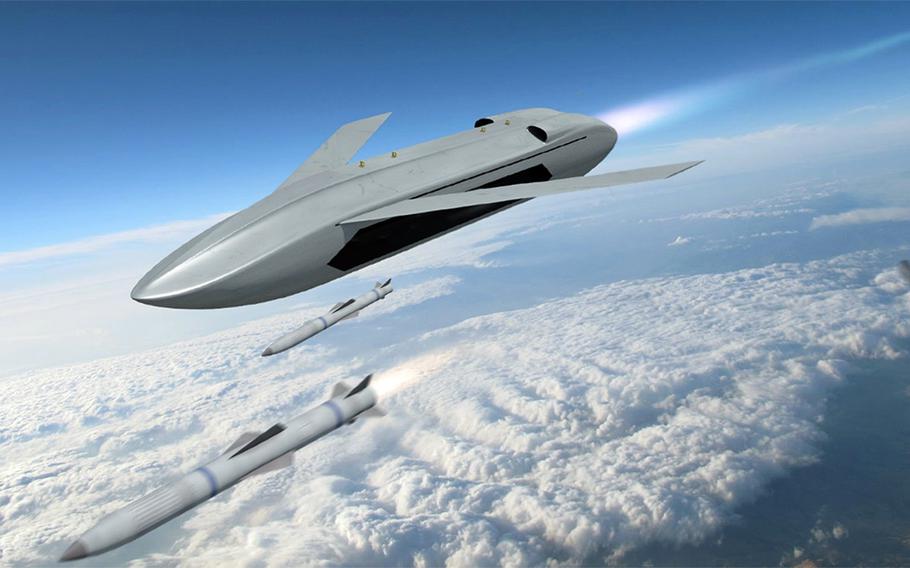 An artist's rendition of the Defense Advanced Research Projects Agency's Longshot Unmanned Air Vehicle concept. DARPA announced it has awarded contracts for the drone, which would be fired by combat aircraft while in flight. (DARPA)

U.S. fighter jets and bombers may one day be able to carry and launch long-range drones that can fire their own air-to-air missiles against enemy aircraft.

The goal is to develop a new unmanned aerial vehicle “that can significantly extend engagement ranges, increase mission effectiveness and reduce the risk to manned aircraft,” DARPA said in a statement.

The drones would be capable of firing more than one missile at air targets, the statement said. The agency's 2021 budget requested $22 million for the initial work.

A plane equipped with LongShot technology could approach its target at a slower speed, while the drone flies ahead to shoot down enemy aircraft, DARPA said last year. This would allow the aircraft to conserve fuel and fire its own missiles closer to the adversary, which “reduces reaction time, and increases probability of kill,” DARPA’s budget document said.

The system also would allow a warplane to engage enemy aircraft at extremely long distances, potentially making the launch plane safer from counterattacks.

It remains unclear whether the drone will incorporate stealth characteristics and whether it will be reusable for other missions.

The program also aims to develop a demonstration system capable of controlled flight before, during and after weapon ejection, the agency said.