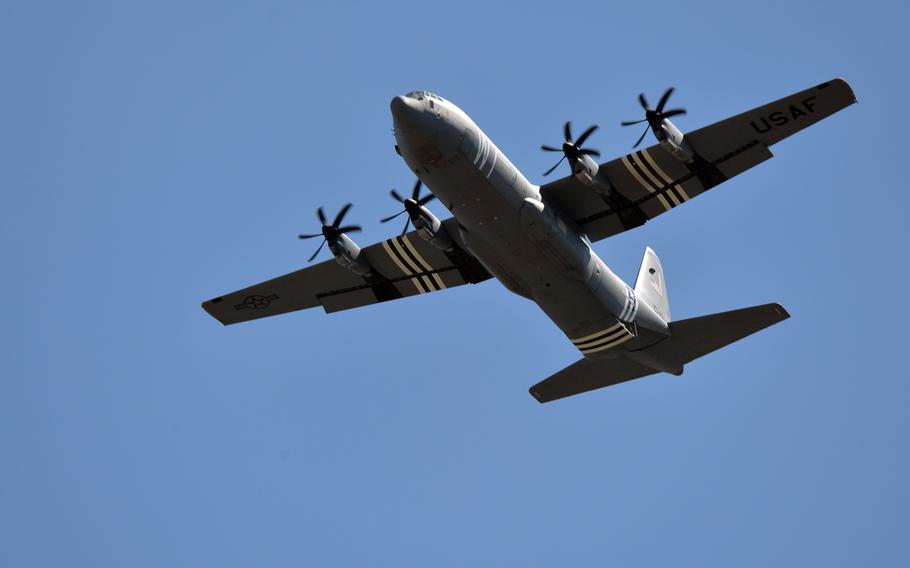 A C-130 Hercules flies over Ramstein Air Base, Germany, in July 2019. Nearly one-fourth of the Air Force's fleet of C-130s is being pulled for inspection after ''atypical'' cracks were found on the lower center wing joint during scheduled depot maintenance, Air Mobility Command announced late Wednesday. (MICHAEL ABRAMS/STARS AND STRIPES)

Crews from nearly a dozen government agencies searched Wednesday for a special operations airman who fell from a C-130 fixed-wing aircraft into the Gulf of Mexico during a training event at Hurlburt Field, Fla., Air Force officials said.

The airman, who has not been identified, fell from the aircraft Tuesday at about 11 a.m. over the Gulf of Mexico, south of Hurlburt Field, during a planned static-line jump, according to a news release from the base’s 24th Special Operations Wing Public Affairs. The incident is under investigation.

Emergency response began immediately, and multiple units were dispatched to search for the airman. Rescue teams are searching a 700-square-mile area off the coast between Fort Walton Beach and Pensacola, according to the news release. The search area will expand and adjust as efforts continue.

Hurlburt Field is the headquarters of Air Force Special Operations Command and located near the Alabama state line on the Florida Panhandle.

Members of Hurlburt’s 24th Special Operations Wing and 1st Special Operations Wing are searching the area alongside aircraft and boat crews from Coast Guard units in the region, the 96th Test Wing from Eglin Air Force Base, Fla., the Army’s 7th Special Forces Group out of Duke Field, Fla., the Army’s 6th Ranger Training Battalion from Eglin Air Force Base, the Santa Rosa County Sheriff’s Office and the Florida Fish and Wildlife Conservation Commission, according to the release.