COVID-19 and flu at the same time? It’s happened at least twice to US military personnel 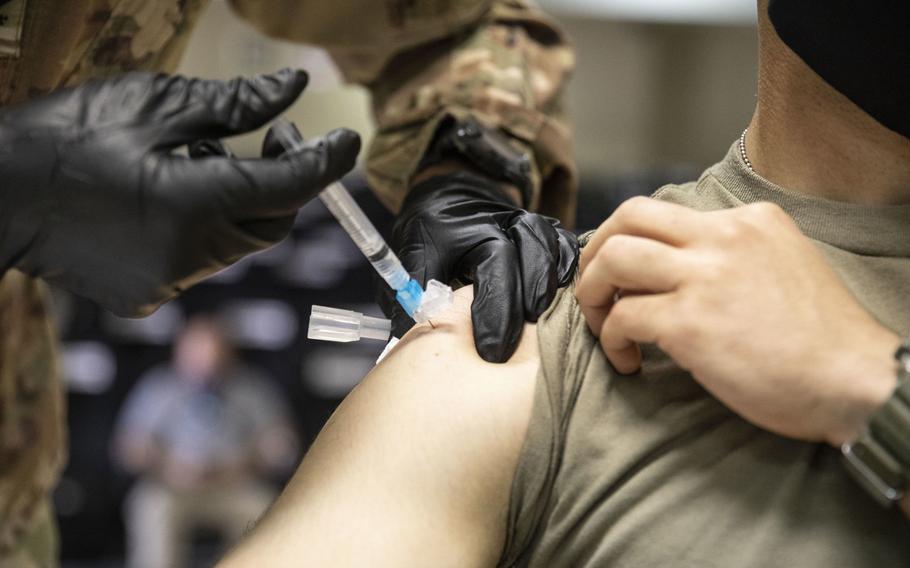 A soldier gets a flu shot in October 2020 on Camp Arifjan, Kuwait. A contractor and a soldier were each infected with COVID-19 and seasonal influenza at the same time in the Central Command area of responsibility, a military medical report in December said. ( Khylee Woodford/U.S. Army )

Military medical experts are calling for troops and Defense Department workers suspected of having COVID-19 or the flu to be tested for both illnesses after a deployed soldier and contractor were found to have them at the same time.

Having COVID-19 and the flu simultaneously more than doubles the risk of death, the researchers said in the December edition of the military’s Medical Surveillance Monthly Report.

Testing for both “is particularly important in the current context of a draw­down in forces in many deployed locations, as further losses of personnel to illness may degrade Commanders’ execution of critical missions,” they wrote.

Deployment, with its close-quarters conditions, may increase the risk of contracting respiratory illnesses such as the flu and COVID-19, they wrote, citing a study published last year in the New England Journal of Medicine about the coronavirus outbreak aboard the USS Theodore Roosevelt. One sailor died and more than a quarter of the aircraft carrier’s nearly 5,000 crew members were infected when the coronavirus swept through the carrier in March.

The MSMR report urged commands to continue supporting vaccination, physical distancing, use of face coverings, hygiene and sanitation, and other protection measures.

The researchers looked at the first confirmed cases of coinfection with the flu virus and coronavirus in U.S. Central Command’s area of responsibility, which stretches from northeast Africa across the Middle East to Central and South Asia.

The two men involved, a 56-year-old contractor and a 34-year-old Army officer, went to a military treatment facility within a day of each other in early October, the report said.

Neither had received the annual flu vaccine, which is a requirement for active-duty service members. Flu inoculation campaigns usually start in September or October, but there have been long delays this season in delivering vaccine doses to overseas military posts.

The contractor had fever, chills, loss of appetite and headache when he went to the clinic, the report said. All are symptoms of the flu and COVID-19, so he was tested for both.

The flu test came back positive, and he was started on antiviral treatment and placed in isolation. A coronavirus test showed later that he also had COVID-19, the report said, without specifying when the second diagnosis was made.

The officer showed no symptoms when he tested positive for COVID-19 while he was in quarantine after coming into close contact with someone diagnosed with illness. He only began showing symptoms two days after his positive test, when he complained of muscle soreness, “a classic symptom of seasonal influenza,” the report said.

A flu test came back positive and he was given the same antiviral medication as the contractor.

Neither man became seriously ill and both returned to duty 10 days after the initial onset of symptoms, the report said.

While it’s unclear how often simultaneous infections occur, several studies have reported coinfections in COVID-19 patients, the report said. One of them found that nearly half of 93 critically ill COVID-19 patients in Wuhan, China, where the coronavirus pandemic is said to have originated, also had the flu. Small studies in other places also found coinfection with influenza and other respiratory illnesses, including pneumonia.

People with COVID-19 or flu-like symptoms at military clinics are routinely tested for both illnesses, said Gino Mattorano, a spokesman for Regional Health Command Europe. But with the incidence of influenza down sharply this season, few coinfections have been reported, he said.