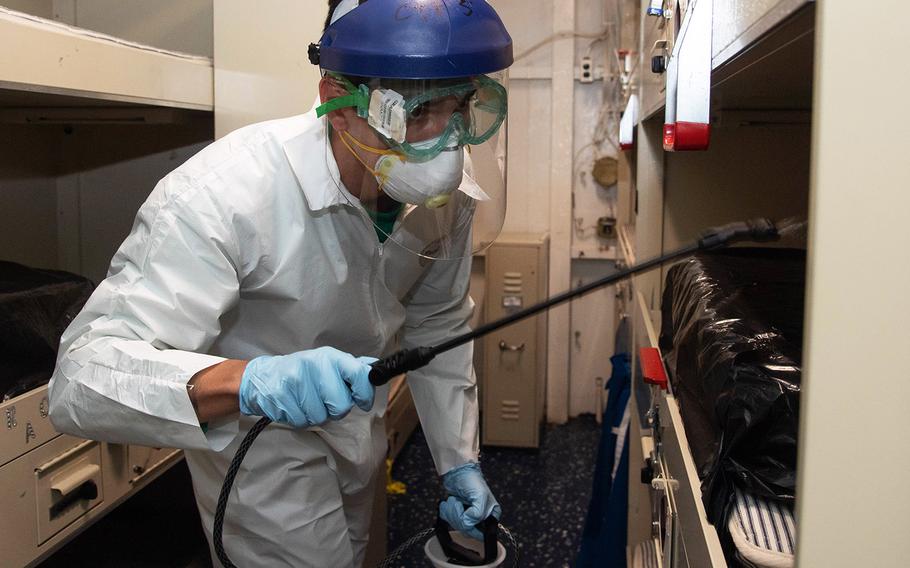 WASHINGTON — The coronavirus outbreak aboard the USS Theodore Roosevelt was exacerbated by the failure of Navy commanders to follow procedures meant to stop the spread of infectious diseases, according to a Defense Department report.

The semi-redacted report, published Monday by the Defense Department's inspector general, examined whether the Navy was prepared to deal with an infectious outbreak, such as the coronavirus, on its ships. Investigators found the service and commands, including U.S. Fleet Forces and Pacific Fleet, which were examined in the report, did have “policies, plans, and procedures” established, but the guidelines were not being properly followed before or after the pandemic began.

“Prior to the [coronavirus] pandemic, we found that four out of five Navy component commands did not conduct a biennial pandemic influenza & infectious disease exercise in accordance with the Office of the Chief of Naval Operations requirements,” investigators concluded in the report.

The report focused on the outbreaks at sea aboard the Roosevelt, an aircraft carrier, and the destroyer USS Kidd.

Investigators did so because of the high number of cases relative to each ship's crew size.

The outbreak aboard the Roosevelt occurred following a port call in Vietnam despite a pandemic being declared by the World Health Organization on March 11. The first case was reported March 24 and as the outbreak grew, the ship had to detour its deployment to Guam.

The report highlights several missteps by commanders in handling the Roosevelt outbreak, which included releasing sailors prematurely from quarantine and continuing to keep gyms open despite the need for social distancing. Those decisions led to more infections, according to the report.

The Roosevelt eventually had 1,273 cases among its nearly 4,800-member crew, and one death. Chief Petty Officer Charles Robert Thacker Jr., 41, died April 13 at the U.S. Naval Hospital in Guam. The handling of the outbreak aboard the ship lead to its commander, Capt. Brett Crozier, to be relieved.

The first case on the USS Kidd was reported April 22 while the ship was operating as part of a counternarcotics mission in the eastern Pacific, the U.S. Naval Institute News reported. More than 45 sailors among the 330-member crew were infected, according to the Navy at the time. However, no final number of the total cases from the outbreak has been released. Information about the Kidd outbreak were still being collected, according to the report.

The report also highlighted some of the lessons learned from the outbreaks, such as restriction of movements and cleaning procedures, and how the issuing of new guidance throughout the coronavirus pandemic from these lessons has helped prevent a repeat of what happened on the Roosevelt and the Kidd.

“Although numerous Navy warships have had crew members diagnosed with [coronavirus] while in port, the Navy has continued to deploy warships and submarines without additional widespread outbreaks that would otherwise cripple warships and interrupt their support to the combatant commanders… The Navy’s updated messages and guidance helped mitigate further outbreaks,” the report states.

The report had three recommendations that involved updating policies and procedures with lessons learned from the pandemic and the two outbreaks, such as pre-deployment quarantines and personal protective equipment supplies.