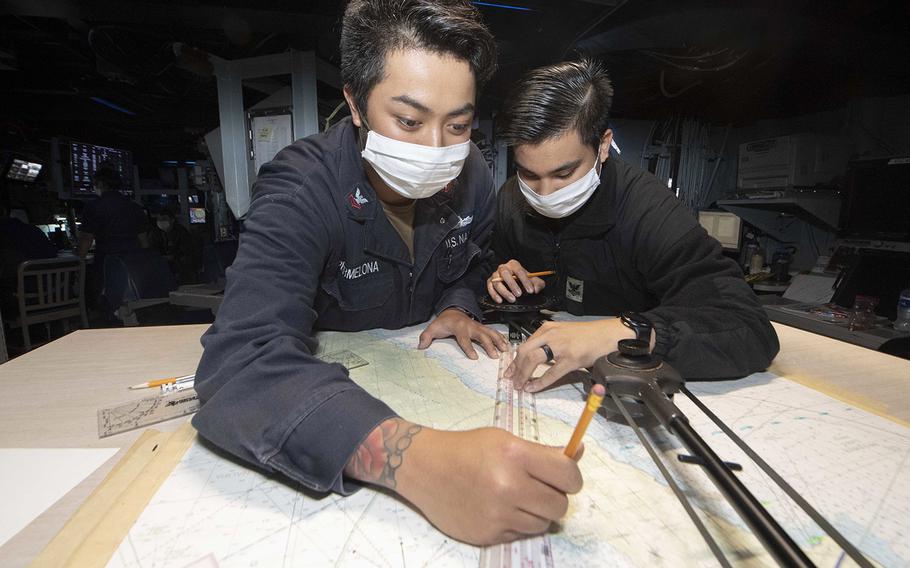 In an April 16, 2020 photo, sailors practice plotting courses during combat systems training aboard the USS Kidd in the Pacific Ocean. (Brandie Nuzzi/U.S. Navy)

WASHINGTON — The coronavirus outbreak aboard the USS Kidd has increased to 47 sailors, as the illness continues to spread among the crew since the first sailor was evacuated from the ship four days ago.

The guided-missile destroyer has had 45% of the crew tested for the coronavirus and two sailors have been medically evacuated to the United States, the Navy reported Monday.

The ship was operating as part of a counter-drug mission in waters under U.S. Southern Command’s responsibility when the outbreak was first reported. The destroyer class that includes the Kidd has a crew of about 330 sailors, according to the Navy.

The USS Makin Island, an amphibious assault ship, is providing medical support for the Kidd while at sea. The Makin Island has a surgical team, an intensive care unit, and additional testing capability, according to the Navy. The Kidd already has a Navy medical evaluation team aboard the ship to help with the virus outbreak.

Fifteen sailors from the Kidd have been transported to the Makin Island due to persistent symptoms but none of them are in intensive care or on ventilators, according to the Navy.

The sailors on the Kidd are wearing protective equipment and N95 masks and the ship is heading to port to manage the outbreak and clean the ship.

As of Monday, the Navy has had 1,659 total cases of the coronavirus among its sailors, the highest among the military services.

On Saturday, when it was reported that the cases on the Kidd had increased to 33, Cmdr. Matt Noland, the executive officer of the destroyer, wrote on the ship’s official Facebook page that doctors aboard the ship are testing sailors for the coronavirus and caring for the confirmed cases.

“I am an optimist, but make no mistake, Kidd is in a fight right now against [the coronavirus] and against anyone out there who might want to capitalize on what they perceive as a weakness,” he wrote. “Your sailors are responding to this like warriors, and we are not weak. We are strong.”