Coronavirus mission for most National Guard troops is extended through Christmas 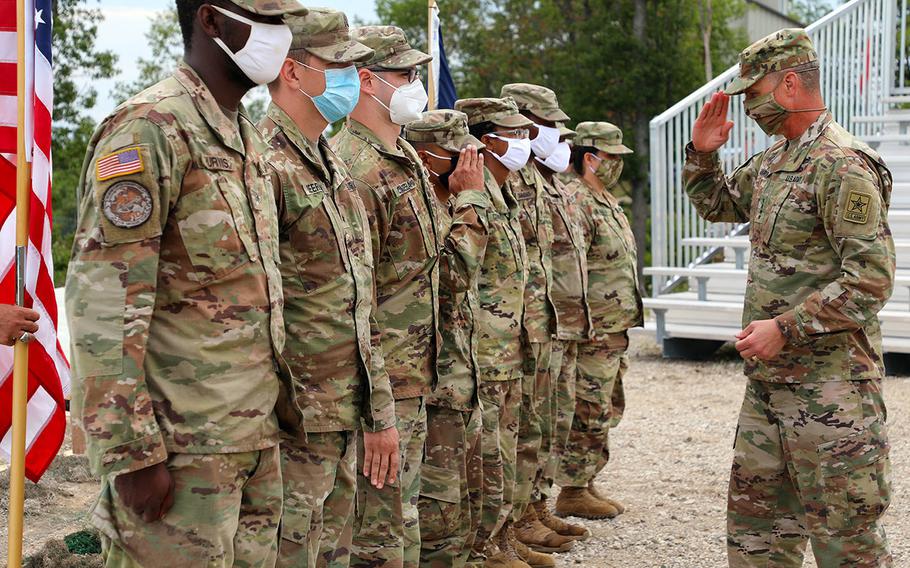 WASHINGTON — Nearly 25,000 National Guard troops serving on coronavirus missions throughout the country have had their deployments extended through Christmas, the White House announced Tuesday.

But the federal government will only pay for 75% of each deployment, according to a White House memo issued Monday. Only Texas and Florida will receive full federal funding. The White House did not respond Tuesday to a request for comment about increased funding for those two states, though Texas and Florida have been hit hard by the virus in recent weeks.

Almost every governor and National Guard leaders lobbied Trump’s administration to keep Guard troops on federal Title 32 status, which provides federal funds to pay for troops to complete missions approved by the Federal Emergency Management Agency while troops remain under the control of the governors. The status provides Guard troops with additional federal benefits and pay not afforded them on state status, such as education and health care benefits, a housing allowance, and benefits associated with retirement.

The deadline for the deployments to end was Aug. 21, but is now extended to Dec. 31 for 49 states and territories. The long-term extension comes amid a U.S. death toll from the pandemic surpassing 155,000 and nearly two dozen states seeing a spike in infections, according to Johns Hopkins University data.

As of Monday morning, more than 24,900 Air and Army National Guard members were deployed in 50 states, three territories, and the District of Columbia to support civilian agencies with coronavirus missions, according to the National Guard Bureau. At the height of deployment levels in May, nearly 50,000 troops were activated for missions that included sorting and delivering medical supplies, cleaning high-traffic public spaces, food distribution, and assisting nursing homes with testing, cleaning, and caring for patients.

When the coronavirus first hit the United States in March, the National Guard was called up to help mitigate the spread and the secondary effects of the virus through state missions such as operating testing sites, assisting food banks, and manning call centers for health concerns and unemployment offices. As the pandemic escalated, Trump authorized the use of federal funds for the troops, but through state-by-state memos instead of a blanket approval.

“Since [the coronavirus] was first discovered in our state, the Michigan National Guard has been a crucial part of our emergency response, from conducting testing and screening, distributing personal protective equipment, and assisting at food banks across the state,” Michigan Gov. Gretchen Whitmer said in a statement.

However, the Trump administration is only covering 75% of the costs of keeping troops deployed.

“While I am grateful for the extension, the president’s decision to federally fund Guard activities at only 75% leaves states across the country with an additional cost when we're already facing severe holes in our state budgets,” Whitmer said.

The National Governors Association on Monday urged Trump not to delay and act on requests across the country to keep troops deployed and providing coronavirus relief.

“While we appreciate the administration’s support over the past few months, short-term extensions and last-minute authorizations are adversely impacting and disrupting state plans and operations,” the association said.

The Guard’s coronavirus mission is the most ambitious domestic use of citizen soldiers for a noncombat mission, with most units throughout the country operating in some capacity since early March. Now governors are saying in addition to combating the virus, federal Title 32 status could better equip states to prepare for hurricane season, which sometimes requires deploying troops for relief.

“With natural disaster season on the horizon, we believe the consistency of Title 32 specifically for coronavirus-related missions will help to provide states and territories with flexibility for easier transitions to supporting local disaster-related crises,” according to the letter to the president signed by governors.

In a news conference last week, Trump said large portions of the country are free of the coronavirus. No state has rid itself of the virus, according to Johns Hopkins University. At least 20 states are experiencing an upward trend in new cases, according to the university’s data.

"We're seeing improvements across major metro areas, and most hotspots, you can look at large portions of our country, it's corona-free,” Trump said. “But we are watching very carefully California, Arizona, Texas and most of Florida, it's starting to head down in the right direction. And I think you'll see it rapidly head down very soon."

In early June, the Guard’s deployments for coronavirus missions and racial justice protests increased the number of troops on the ground to a peak of 75,000 soldiers and airmen. It marked the largest domestic use of the Guard outside of a war scenario. In addition to coronavirus and protests missions, there are an additional 2,400 Guard troops along the U.S.-Mexico border and more than 28,000 deployed overseas, according to the National Guard Bureau.