Coronavirus cases among US troops double in one day; Pentagon prepares hospital ships for response 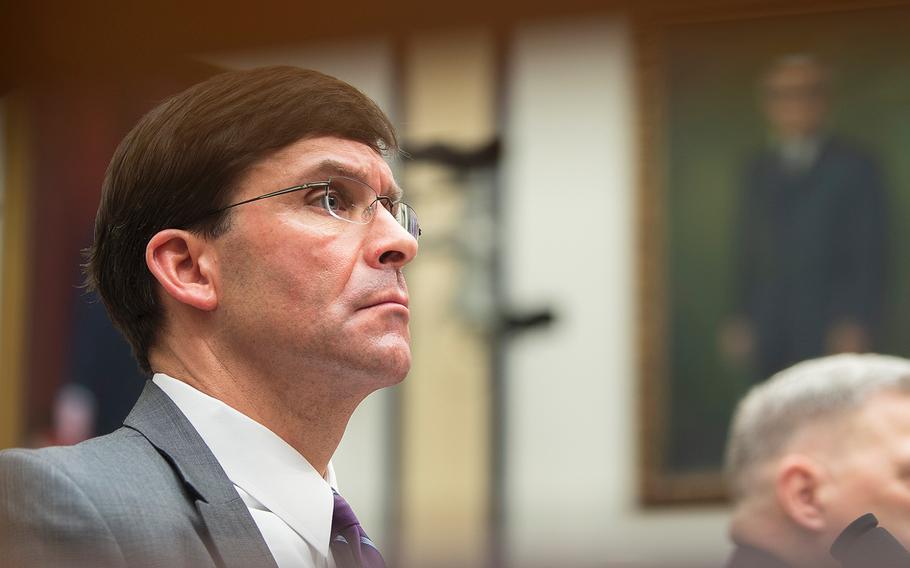 Buy Photo
Defense Secretary Mark Esper attends a hearing on Capitol Hill in Washington on Feb. 26, 2020. Esper said on Tuesday, March 17, that U.S. troops were likely in a good position to avoid serious individual consequences if they contracted the coronavirus. He also said that the Pentagon will provide 5 million respirator masks and 2,000 specialized ventilators to federal heath authorities. (Carlos Bongioanni/Stars and Stripes)

WASHINGTON — Thirty-six American service members worldwide had tested positive for the coronavirus as of Tuesday, a Pentagon spokesman said, confirming that the cases among troops had doubled in just one day.

In total, 59 members of the Defense Department community had confirmed cases of the fast-spreading coronavirus, formally known as COVID-19, said Army Lt. Col. Chris Mitchell, a Pentagon spokesman. Eight DOD civilians, 12 military dependents, three defense contractors and the 36 service members have the virus, he said, noting the numbers were current as of early Tuesday.

The Pentagon did not provide the locations of the cases or the service branches of the infected individuals.

It was a marked jump in coronavirus cases in the 24 hours after the Pentagon said 37 DOD-related individuals had been infected, including 18 service members.

Defense Secretary Mark Esper said Tuesday afternoon that U.S. troops were likely in a good position to avoid serious individual consequences if they contracted the disease. The coronavirus is most likely to seriously sicken or kill older individuals and those with major chronic medical conditions like heart disease, diabetes or lung disease, according to the Centers for Disease Control and Prevention.

“We have a very young and healthy and fit military population,” Esper said at the Pentagon. “I think they will fair well throughout this … they’ll be fine.”

Nonetheless, Esper said it was important that those who showed symptoms or who might have been exposed be tested to avoid spreading the virus to older people living around military posts and others.

Pentagon officials said Monday they had tested nearly 500 DOD-related individuals. They did not immediately provide updated numbers of tests on Tuesday.

The Pentagon is also taking other steps to help respond to the pandemic within the United States. Esper said the military would provide the Department of Health and Human Services with five million respirator masks and other personal protective gear. DOD will also provide HHS 2,000 specially designed deployable ventilators, which help compromised individuals breathe.

The defense chief this week ordered the Navy to prepare its two hospital ships — the San Diego-based USNS Mercy and the Norfolk-based USNS Comfort — for potential deployment.

Both of the ships have about 1,000 hospital beds and are run by military medical professionals, but they are designed to respond to traumatic emergencies, officials have said. Many of the medical professionals come from the Pentagon’s reserve ranks, which would mean pulling them away from their civilian jobs — often in hospitals, Esper said.

“What I don’t want to do is take reservists from a hospital where they are needed just to put them on a ship to take them somewhere else where they’re needed,” he said.

The ships also are not designed to aid in the treatment of highly infectious diseases, he noted. Pentagon officials on Monday said the same about military field hospitals, which are designed to treat trauma patients.

The defense chief said he could deploy the Mercy and Comfort to ease strain on hospitals that are working with coronavirus cases and trauma patients.