Coast Guard finds way to pay its members next week — but Jan. 15 checks are not guaranteed 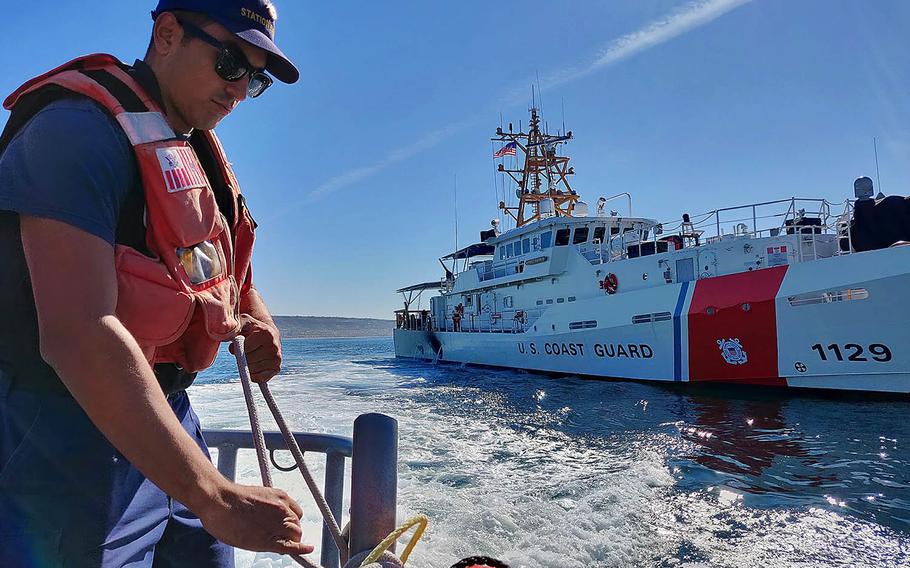 A Coast Guardsman works during a patrol off the coast of Southern California, Nov. 27, 2018. (Patrick Kelley/U.S. Coast Guard photo)

Coast Guard servicemembers will receive their paychecks Monday despite an earlier announcement saying they’d miss out due to the federal government shutdown, officials said Friday.

“I am pleased to announce the Administration, the Department of Homeland Security and the Coast Guard have identified a way to pay our military workforce on 31 December,” Coast Guard Vice Commandant Adm. Charles Ray said in message to servicememebers.

Earlier in the week, a Coast Guard spokesman indicated that pay would stop during the shutdown, which began Dec. 21 and shows no signs of ending soon.

“I recognize that this changes course from previously provided guidance on military pay, however, this is outstanding news for our military workforce,” Ray said.

Though the other military service branches – Army, Air Force, Navy and Marines – are part of the Department of Defense, which has been unaffected by the shutdown, the Coast Guard falls under the Department of Homeland Security, one of several federal agencies whose budget was not approved beyond Dec. 21.

There are about 42,000 active-duty Coast Guard members. In addition, about 7,400 civilian Coast Guard employees are on furlough and another 1,300 are continuing to work without pay.

The Coast Guard’s one-time action applies to servicemembers who were on active duty in December and reservists who drilled before the lapse in appropriation, Ray said.

Information posted on the Coast Guard’s official website says the service generally lacks the authority to pay its members during a government shutdown. However, research and legal analysis determined that it can execute pay and allowances for December.

“If you were an active duty military member in December, then you will receive your monthly paycheck on Dec. 31, 2018. That paycheck will include all of the normal pay and allowance benefits,” the website says.

However, the website warns that servicemembers’ Jan. 15 paychecks are not guaranteed.

“Meeting active duty and reserve military payroll for January 2019 will require a fiscal year 2019 appropriation, a continuing resolution, or passage of an alternative measure,” the website says.

An agreement to end the shutdown hangs on a standoff between the White House and Democrats on Capitol Hill over funding for a wall along the U.S. border with Mexico. President Donald Trump has said he will not sign a spending resolution without border wall funding. Congressional Democrats are refusing to relent to the president on this issue.

Many day-to-day operations continue at Coast Guard facilities, with some exceptions.

Saylor also said maintenance to navigation aids, such as buoys, is on hold, as is credentialing and merchant documentation. Some routine maintenance and training will also hold until the shutdown ends.

The Coast Guard is providing servicemembers with financial counseling and employee assistance programs, Saylor said. An internal messaging network is keeping servicemembers informed of the shutdown and its impact to pay and operations.

“They’re reminded to take account of what bills they’ll have and what their financial obligations are and to meet them,” he said.

Leadership within Sector Houston-Galveston of the Coast Guard is keeping lines of communication open among its 350 servicemembers, Strickland said.

“All supervisors in departments have been in touch with their members,” she said, including information about Coast Guard Mutual Assistance, which offers assistance for everyday essentials to servicemembers during financial hardship.

A welcome message on the program’s website addresses concerns caused by the shutdown and asks servicemembers to reach out to their banks, landlords and creditors who “can often help keep the ship afloat while the emergency situation recedes.”

During any single pay cycle, about $150 million is required to pay all Coast Guard military and civilian employees, the program’s welcome message says.

But the program does not have the resources to help everyone and the goal is to assist at least the 21,000 servicemembers ranked E-5 and below, said retired Rear Adm. Cari Thomas, chief executive officer for Coast Guard Mutual Assistance.

“Our mission is to care for our own,” she said. “It is hard when the Coast Guard that you love doesn’t have the ability to pay you. It impacts you, your family, and your home. I have lived through earlier government shutdowns, and know first-hand how much life at home impacts your life at work. That is why we help those who help the public.”