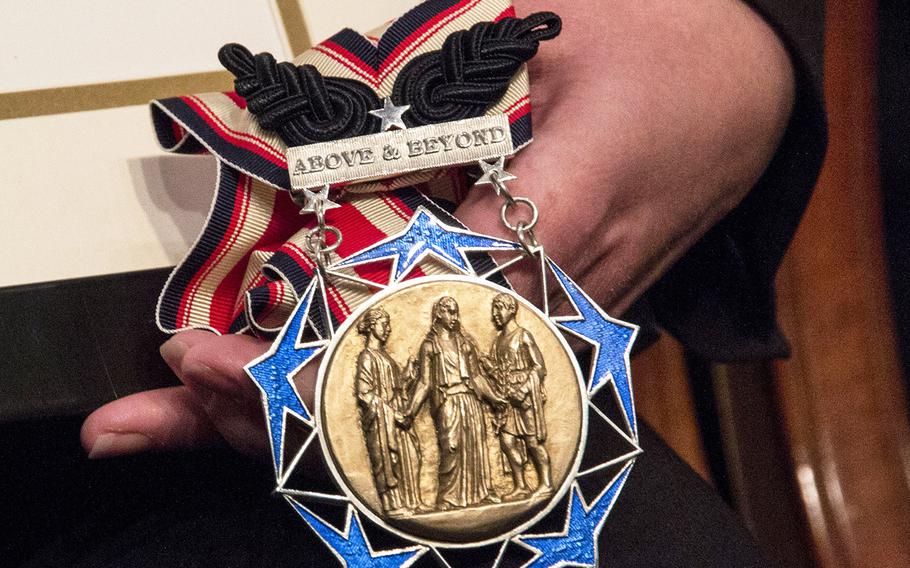 A Citizen Honors Award medal, as seen during a ceremony at Arlington National Cemetery on Medal of Honor Day in 2014. (Stars and Stripes)

Although the coronavirus crisis has forced the postponement of Medal of Honor Day activities in the Washington, D.C. area to a later date, the Congressional Medal of Honor Society has announced the recipients of its annual Citizen Honors Awards.

Every year on March 25, the society selects six individuals and an organization who "exemplify the values embodied in the Medal of Honor: courage, sacrifice, commitment, integrity, citizenship, and patriotism," and recognizes them in a special ceremony attended by several recipients of the nation's highest military honor.

This year's Citizen Honors recipients, according to a CMOHS press release, are:

Riley Howell of Waynesville, N.C., shielded students from a gunman during an incident at the University of North Carolina-Charlotte. Howell did not survive the attack, but he is attributed with saving the lives of many students.

Keanon Lowe of Portland, Ore., disarmed a student with a loaded shotgun during an incident at Parkrose High school in Portland, Ore. Lowe is attributed with saving the lives of the school's students and faculty.

Christian Garcia of Santa Fe, Texas, sprung into action when a gunman opened fire on first-period art classes at Santa Fe High School. Garcia did not survive the attack, but is hailed a hero for his actions.

Cody Runyon of Rochester, Minn., pulled an 11-year-old fellow swimmer from the bottom of a pool after the younger boy had sunk and become unresponsive. Runyon noticed the danger and reacted quickly, preventing further tragedy. The victim credits Runyon and the adult for saving his life.

Michael Jernigan of North Richland Hills, Texas, for his lifetime of selfless service to improve the lives of blind and impaired veterans. Jernigan co-founded “Paws for Patriots” at South Eastern Guide Dogs, which provides guide dogs and service animals to veterans.

Zachary Brooks of Summit, N.J., for his advocacy of those affected by autism. Brooks founded “Artfully Abled,” an art event showcasing the abilities of those with developmental disabilities.