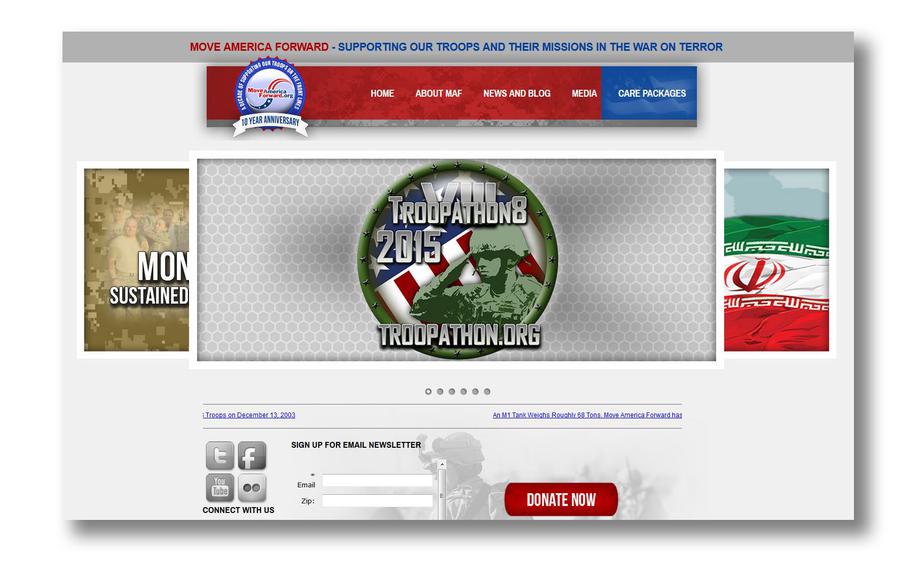 A screenshot of Move America Forward's website. The nonpartisan nonprofit has been accused of overstating the number of troops getting care packages and funneling money to political causes supported by Move America Forward’s longtime political director and Tea Party activist Sal Russo. (moveamericaforward.org)

Just below the link for your chance to win an AR-15 assault rifle on troop charity Move America Forward’s website, there was a number that would surprise the country’s top generals.

In a bid to get donations to send care packages to deployed servicemembers, the controversial charity said that “with over 38,000 troops still in Afghanistan, there remains a huge need for support.” There’s no doubt that troops in harm’s way appreciate a box of goodies, but there’s a problem: There haven’t been that many U.S. troops in Afghanistan for more than a year. The actual number is closer to 10,000.

After a call from Stars and Stripes on Monday, the group changed the number, with a spokesman saying it was an oversight. But it’s the latest misstep for a prominent charity set to begin its annual fundraising drive Thursday with an online and radio simulcast. This year’s “Troopathon” guests will include Rush Limbaugh; Republican presidential candidates Ted Cruz and Mike Huckabee; and pro wrestler Hulk Hogan.

The nonpartisan nonprofit has been accused of overstating the number of troops getting care packages and funneling money to political causes supported by Move America Forward’s longtime political director and tea party activist Sal Russo. In August, independent nonprofit ProPublica published the results of its investigation.

It showed that Move America Forward had made many misrepresentations, including claims of sending packages to a battalion of Marines in Afghanistan that was not in country at the time. The official history of the 1st Marine Division battalion nicknamed “Geronimo” does not show a deployment there during the charity’s fund drive.

“In our view, everything that was written in the ProPublica piece about us being dishonest were misunderstandings or dishonest reporting,” he said in a phone interview Monday.

Kim Barker, who wrote the expose and who now works for The New York Times, stuck by her story in an email to Stars and Stripes.

Gonzalez says the charity has not altered its operations since the allegations.

“No, as far as how we actually run the organization, nothing has changed,” he said.

He did say the group had not paid much attention to the way they reported expenditures, and that reporting changes had improved their standing with charity watchdog Charity Navigator. A check of the website Tuesday showed Move America Forward still receiving zero stars out of a possible four. That “extremely poor” rating means the charity “consistently performs far below industry standards and below nearly all similar charities,” according to its metrics.

To see a list of charities that assist military personnel and their families, go to charitynavigator.org. Look for groups with the highest ratings.