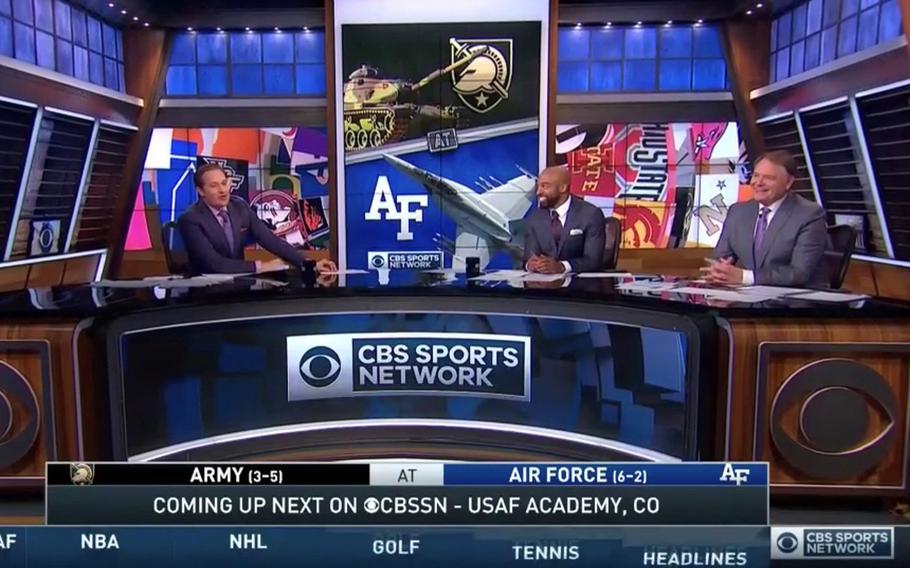 CBS Sports displayed a graphic of an Navy F-18 Hornet during the Air Force vs Army game on Nov.2, 2019. (Screenshot of CBS Sports broadcast)

If you saw the Air Force vs. Army football game Saturday, you may have noticed a graphic on CBS Sports, featuring an Army tank and what was supposed to be an Air Force jet.

On closer inspection, the tank was an M-60 Patton — a little dated but definitely Army — but the jet was an F-18 Hornet, which is flown by the Navy, not the Air Force.

The graphic was displayed behind CBS Sports announcers Brent Stover, Houston Nutt and Keenan Reynolds as they talked about the two teams and their chances of winning the game. Reynolds, coincidentally, attended the U.S. Naval Academy and was a quarterback for the Midshipmen.

“The F/A-18 seems to be used all the time to describe the Air Force by media and ad agencies,” said Kevin Divers, an Air Force Academy graduate who was on the F-22 developmental test team at Edwards Air Force Base, Calif.

“They should just use my plane, the F-22 Raptor. Much cooler look and absolutely Air Force,” said Divers, who posted the erroneous image used by CBS on his Facebook page.

CBS Sports did not immediately respond to a request for comment.

The Air Force Academy Falcons went on to a come-from-behind 17-13 win. The two teams have played each other every year since 1971.