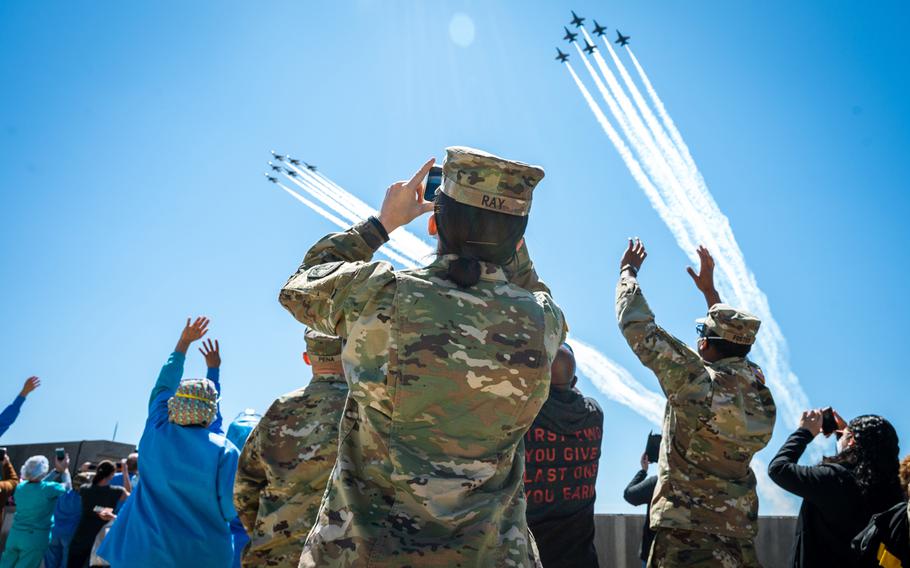 Blue and gold Navy F/A-18 Hornets and red, white and blue Air Force F-16 Fighting Falcons soared together over New York City on Tuesday, kicking off a multi-city series of flyovers aimed at boosting morale during the coronavirus pandemic.

President Donald Trump announced the Blue Angels and Thunderbirds mission, dubbed Operation America Strong, last week, saying it was “the idea of our great military men and women” to recognize the medical personnel, first responders and other essential workers.

“What we are doing is paying tribute to our frontline health care workers confronting [the coronavirus], and it’s really a signal to all Americans to remain vigilant during the outbreak,” he said.

On Tuesday, the Navy and Air Force demonstration teams flew together over New York City, parts of New Jersey and Philadelphia. Other joint flights are slated for Washington, D.C.; Atlanta; and Dallas, Houston and Austin in Texas, according to a memo about the operation.

The teams will also conduct flyovers on their own.

The Florida-based Blue Angels are expected to take their tour to Detroit, Chicago, Indianapolis, Nashville and New Orleans; Miami, Tampa, Tallahassee and Jacksonville in Florida; Norfolk and Virginia Beach in Virginia; and Kingsville and Corpus Christi in Texas.

“We are incredibly honored to have the opportunity to salute those working on the frontline of the [coronavirus] response, and we are in awe of your strength and resilience,” the Blue Angels’ commanding officer and flight leader, Cmdr. Brian Kesselring, told The Associated Press. “Thank you to all of those essential industries keeping our nation moving forward. We will get through this. We are all in this together.”