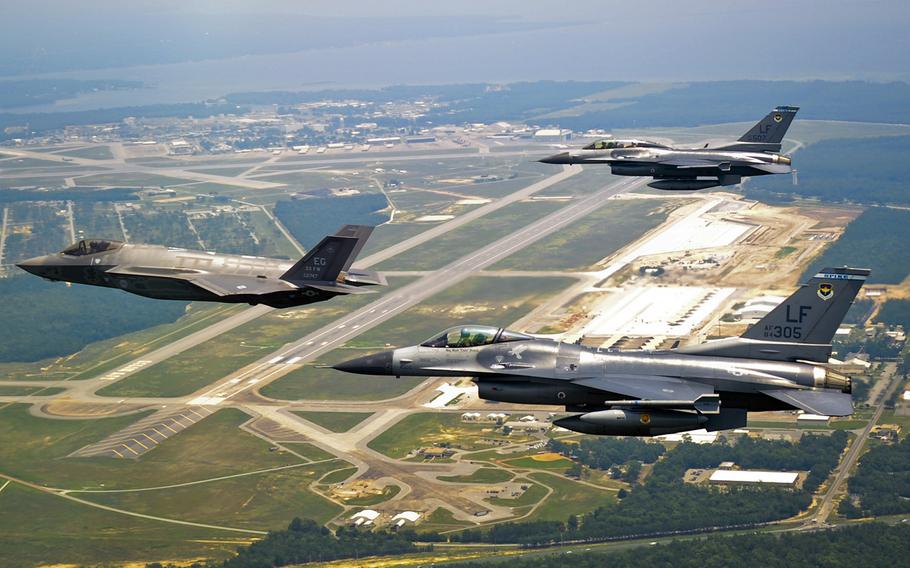 WASHINGTON — The expensive, high-tech F-35 Lightning II joint strike fighter was recently outperformed by an F-16 during an air combat test, according to the military blog War Is Boring.

The F-35 was bested in nearly all aerial maneuvering by one of the military’s stalwart fighter jets during a January test near Edwards Air Force Base, Calif. The site obtained a five-page report by the joint strike fighter test pilot.

The poor performance compared with an older and less advanced aircraft could raise new questions about the over-budget and behind-schedule F-35 program, which is often called the most expensive in U.S. history and is expected to produce its first deployed aircraft this summer.

“The evaluation focused on the overall effectiveness of the aircraft in performing various specified maneuvers in a dynamic environment,” the F-35 tester wrote, as quoted by the blog at medium.com/war-is-boring. “This consisted of traditional basic fighter maneuvers in offensive, defensive and neutral setups at altitudes ranging from 10,000 to 30,000 feet.”

Maj. Gen. Jeffrey Harrigian, director of the F-35 Integration Office of the Air Force, said the report was misleading. He said the F-35 involved in the test was a variation designed for flight sciences testing and was not equipped with newer features, including sensors that allow the aircraft to see its enemy “long before it knows the F-35 is in the area” and special stealth clothing “that make them virtually invisible to radar.”

The test plane was also not equipped with weapons or software that allow the F-35 pilot to turn, aim a weapon with the helmet and fire “without having to point the aircraft at its target,” Harrigian said in a statement.

“It is too soon to draw any final conclusions on the maneuverability of the aircraft,” he said. “The F-35 is designed to be comparable to current tactical fighters in terms of maneuverability, but the design is optimized for stealth. This will allow it to operate in threat environments where the F-16 could not survive.”

The Pentagon recently told Congress that the first F-35s in the field will not be capable of carrying a full array of weapons for close-air-support or give pilots night vision.

“It’s concerning that test pilots are finding the F-35 isn’t as capable as systems that have been in our inventory for decades, but I’m even more alarmed that the Pentagon didn’t present information about these deficiencies to Congress as we considered a dramatic ramp-up of the program,” said Rep. Jackie Speier, D-Calif.

“The Pentagon is asking the American taxpayer to cough up hundreds of billions of dollars based on incomplete information. We already know the F-35 isn’t ready for full-rate production, and we shouldn’t be buying so many until we know it works,” she said in a statement Wednesday.

Lawmakers have lamented years of delays in a program that has racked up almost $400 billion in costs.

The Senate has proposed an additional $1 billion for the program to buy six more F-35s as part of next year’s defense budget. The proposal was crafted and supported by Sen. John McCain, R-Ariz., who chairs the Armed Services Committee.

“Obviously, reports like these are not encouraging, but we recognize it represents a single data point with an early model F-35 in what will be an extensive operational testing program,” McCain spokesman Dustin Walker wrote in an email to Stars and Stripes. “We hope the Air Force will use the results of ongoing testing to ensure the F-35 will dominate in real-world combat scenarios.”