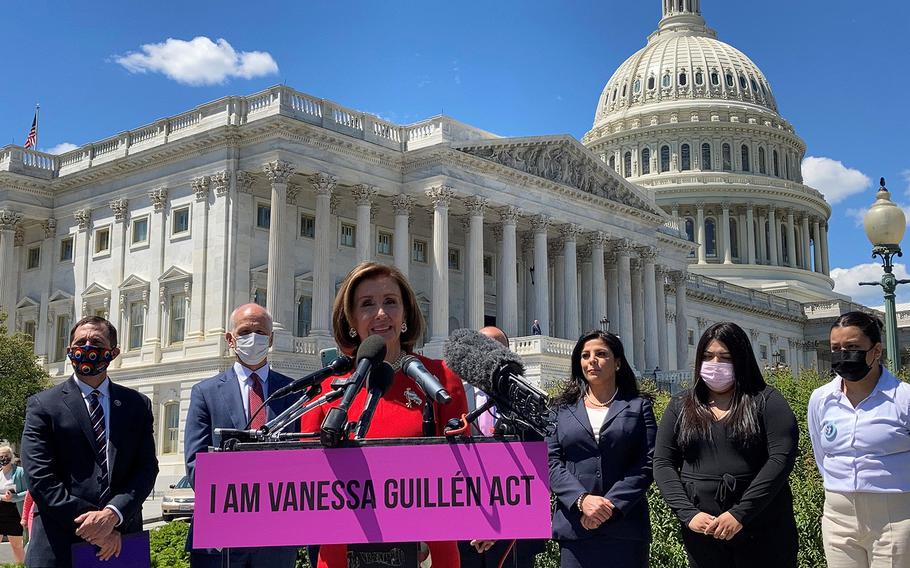 Buy Photo
House Speaker Nancy Pelosi, D-Calif., backed by other members of Congress and Vanessa Guillen's sisters, at a Capitol Hill press conference on Thursday, May 13, 2021. “I’m proud to support the I Am Vanessa Guillen Act, to stand with victims, survivors and families that combat sexual assault in the military,” Pelosi said (Joe Gromelski/Stars and Stripes)

Buy Photo
House Speaker Nancy Pelosi, D-Calif., backed by other members of Congress and Vanessa Guillen's sisters, at a Capitol Hill press conference on Thursday, May 13, 2021. “I’m proud to support the I Am Vanessa Guillen Act, to stand with victims, survivors and families that combat sexual assault in the military,” Pelosi said (Joe Gromelski/Stars and Stripes) 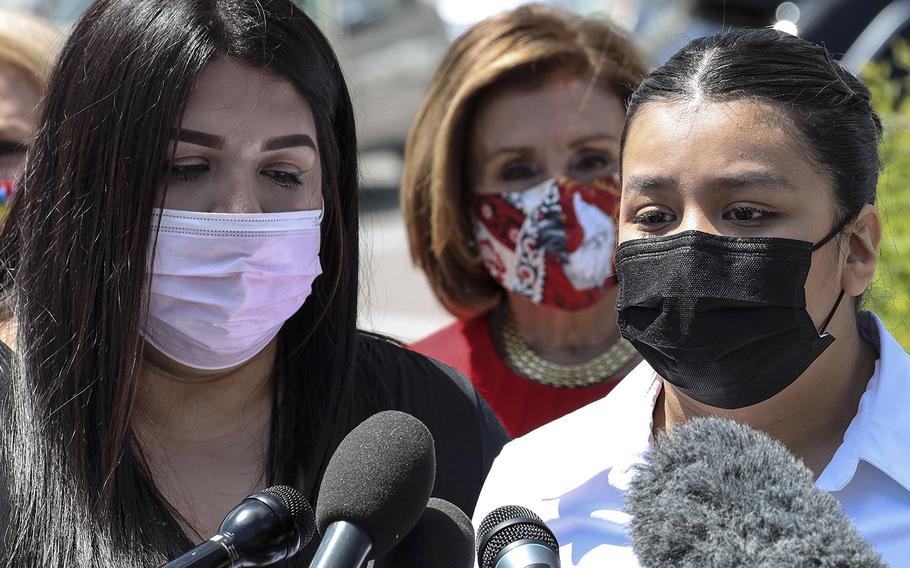 Buy Photo
Mayra, left, and Lupe Guillen, sisters of slain U.S. Army Pfc. Vanessa Guillen, speak at a Capitol Hill news conference to reintroduce the "I am Vanessa Guillen Act" on May 13, 2021. Behind them is House Speaker Nancy Pelosi. (Joe Gromelski/Stars and Stripes)

WASHINGTON — Lawmakers introduced legislation Thursday that would change the reporting process for sexual harassment and assault in the military and allow service members who are victims to seek monetary damages from the Defense Department.

The bill’s proponents said it would “revolutionize” the way the military handles reports of sexual harassment and assault. It comes in response to the brutal killing last year of Spc. Vanessa Guillen, who was sexually harassed before she was killed.

The legislation, titled the I Am Vanessa Guillen Act, was introduced in the House and Senate on Wednesday with more than 150 lawmakers signing on in support. Rep. Jackie Speier, who is leading the House effort, said she planned to get the measure into the National Defense Authorization Act this year. The NDAA sets the Defense Department’s annual budget and includes a slew of policies for the Pentagon. House Speaker Nancy Pelosi, D-Calif., vowed to help get the measure to the House floor.

“I’m proud to support the I Am Vanessa Guillen Act, to stand with victims, survivors and families that combat sexual assault in the military,” Pelosi said during a news conference. “We will not stop until we pass the bill and until we finally and fully end this epidemic in the military, in the workplace, in all places.”

Guillen’s slaying drew attention to the rates of sex-related offenses in the military and prompted the Defense Department to initiate several internal reviews.

When Defense Secretary Lloyd Austin took office this year, he created an independent panel to study the Pentagon’s sexual assault prevention programs. The panel recommended that decisions to prosecute service members for sexual assault be made by independent authorities, not commanders — a change that lawmakers have been trying to implement.

After a separate review that looked specifically into Fort Hood, the Army announced earlier this month it would split control of its criminal investigative agency from a general officer to a civilian director and add more civilian agents to its workforce.

The steps taken by the Defense Department have not been good enough, lawmakers said Wednesday.

“Major transformational change is needed, not only in the military justice system, but in the culture and command climate of the military,” Speier said. “Vanessa’s grisly murder awakened Congress. The clock has run out on DOD half measures. We must act to take sexual violence cases out of the chain of command.”

The I Am Vanessa Guillen Act would create a stand-alone military offense for sexual harassment and move decisions about prosecuting sex-related cases outside the chain of command. It would also reform the Army’s Sexual Harassment Assault Response Prevention program by establishing civilian leaders and creating full-time positions for victim advocates and sexual assault response coordinators.

In addition, it establishes a process in which service members can file claims for negligence against the Defense Department and seek monetary damages in instances of sexual assault and harassment.

Sen. Mazie Hirono, D-Hawaii, introduced the companion bill in the Senate on Wednesday. Speier said the lawmakers are working with Sen. Kirsten Gillibrand, D-N.Y., who is behind a similar bill that would remove decisions about whether to prosecute sexual assault and several other serious crimes from the hands of military commanders.

Gillibrand recently said her bill had enough support to pass through the Senate after years of pushback.