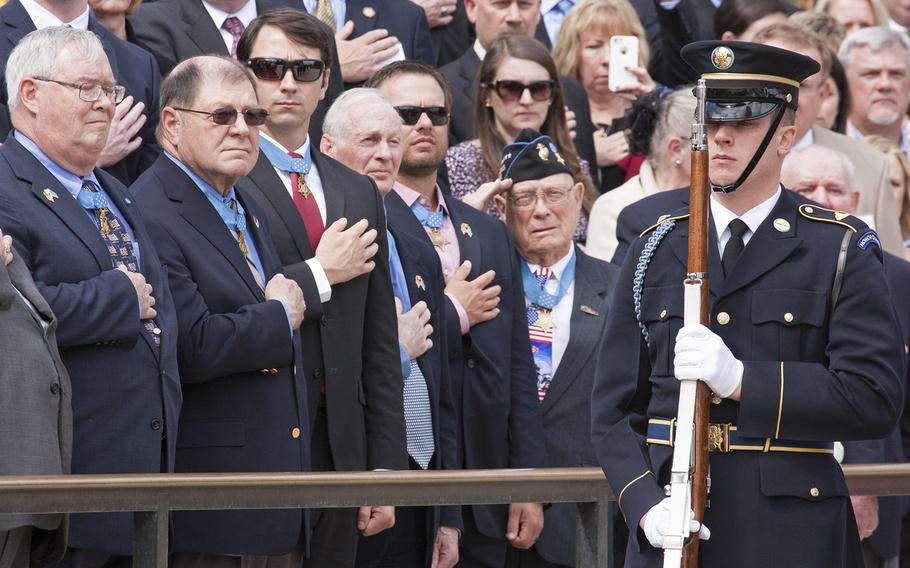 Buy Photo
Medal of Honor recipients watch the Changing of the Guard at the Tomb of the Unknown Soldier in Arlington National Cemetery during Medal of Honor Day, March 25, 2016. (Meredith Tibbetts/Stars and Stripes)

A Washington monument to honor Medal of Honor recipients was proposed Tuesday in legislation introduced by two Texas congressmen.

Last month, the north Texas city, located 20 miles west of downtown Dallas, was named as the home of the future museum by the Medal of Honor Museum Foundation.

“We look forward to working with the bipartisan contingent of elected officials to make sure we are doing all that we can to honor the more than 3,500 Medal of Honor recipients and get this great piece of legislation passed," said Joe Daniels, CEO and president of the National Medal of Honor Museum Foundation.

The foundation has identified potential sites for a monument and is working with a bipartisan group of members in Congress to build the monument in an ideal location as quickly as possible, according to a spokesperson for the foundation. Information related to the rendering and cost of the monument is not yet available, but will use private and public donations.

The measure has gained 18 cosponsors, 12 of which are from Texas. After introduction, it was referred to the House Committee on Natural Resources, according to the lower chamber’s website. The full text of the bill is not yet available.

“I am honored to introduce this legislation that will honor these brave men and women for risking their lives to protect our democracy,” Veasey said in a statement. “I am also proud to join my fellow North Texan, Congressman Wright, to ensure that the city of Arlington, Texas, will be the forever home of this new Medal of Honor Museum.”

Wright expressed similar sentiments in a statement. These service members’ contributions “deserve to be memorialized with a monument,” he said.

"These men and women went above and beyond the call of duty on the battlefield in order to preserve our values and way of life," Wright said.

The Arlington museum is scheduled to open to the public in 2024 and will be located near two professional sports stadiums also located in the city. It will feature permanent, interactive experiences and rotating exhibitions and an education center.