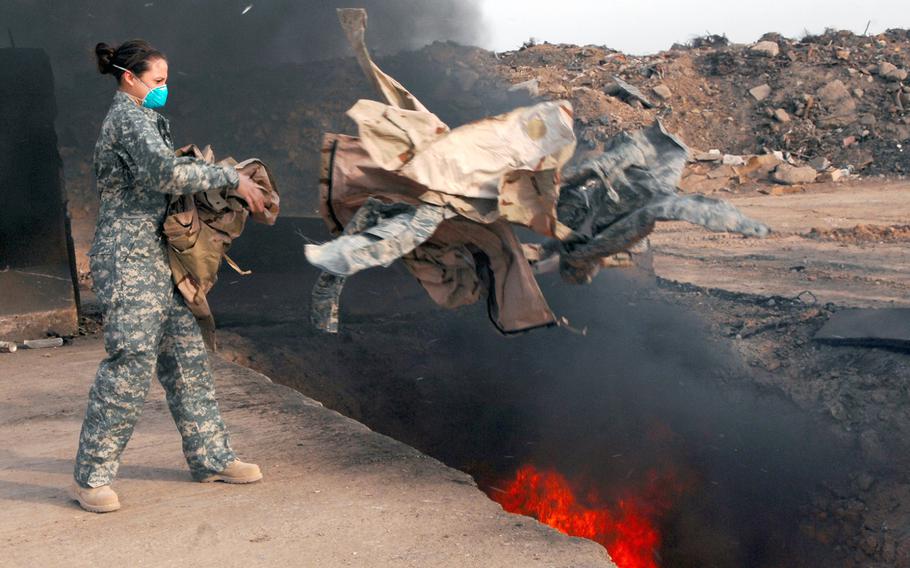 WASHINGTON — A new bill in Congress would require the Defense Department to declassify documents on troops who were exposed to toxic substances and shed new light how exposure affects children.

Military records on incidents that exposed at least 100 servicemembers would be released under the bill, which has been introduced in the House and Senate. It would also create a national institute and advisory panel to study the health of troops’ descendants.

The proposed law is early in the legislative process and had a first hearing before a House subcommittee Thursday. Similar proposals championed by veterans groups have failed, but if passed it could provide a wealth of new information on long-running health concerns that span from Agent Orange in Vietnam to burn pits in Iraq and Afghanistan.

“We believe this may be the most important bill for vets since the Agent Orange Act in 1991,” which extended benefits to those with conditions connected to the herbicide, said John Rowan, national president of Vietnam Veterans of America, which has backed the bill.

The open records measure would require the DOD to provide enough information on toxic events to determine whether a servicemember was exposed, the potential severity and what health conditions might result.

However, the bill, sponsored in the House by Rep. Dan Benishek, R-Mich., does include an exception that allows the defense secretary to block a declassification if it endangers United States security.

Along with the new documentation, the Department of Veterans Affairs would stand up a research institute for the diagnosis and treatment of children with medical conditions related to the exposures experienced by their parents when they served, according to the bill language.

Rowan said the VA recently held hundreds of town hall meetings across the country and heard many accounts of reproductive issues and children’s health problems from veterans and their spouses.

Such inter-generational problems have been blamed on Agent Orange for decades. But Rowan said too few in-depth health studies on descendants have been done.

Toxic exposure has become an issue for those who served in Iraq and Afghanistan. Veterans of those wars are now suing American contractors — the DOD cannot typically be sued for exposure — over open-air burn pits they claim caused diseases. The Supreme Court ruled earlier this year that the suits can move forward.

Kelly Kennedy, a spokeswoman for Bergmann and Moore, a national law firm that handles veterans’ appeals cases, said the release of Pentagon documents could help speed the understanding of mass exposure incidents such as the U.S. destruction of a weapons facility at Khamisiyah in southern Iraq in 1991.

Thousands or even hundreds of thousands of troops were exposed the nerve agent sarin during the Gulf War attack, she said.

“The government declassified that event 10 years after the fact, and it meant that researchers could look at air patterns to see who was exposed, as well as animal research to see potential symptoms,” Kennedy wrote in an email. “That has been extraordinarily important for Gulf War illness.”