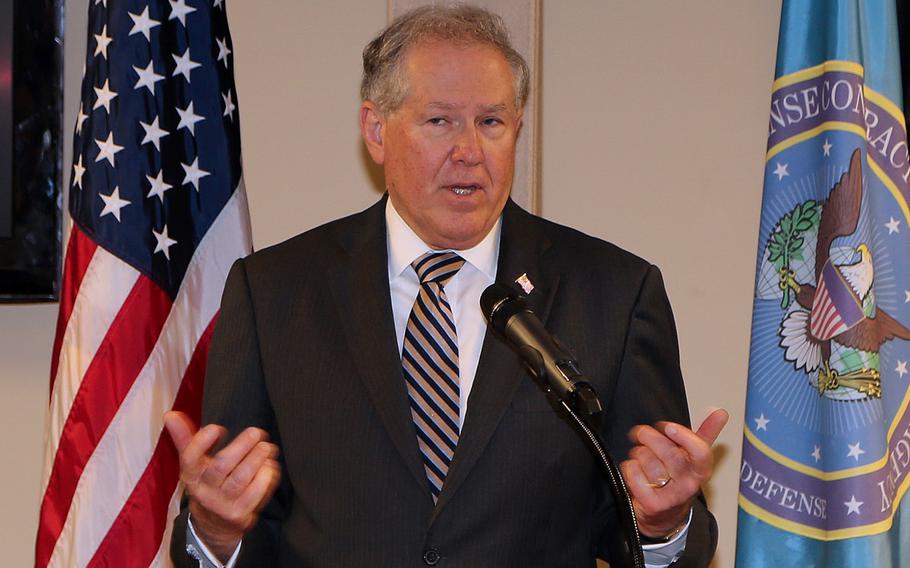 Frank Kendall, who was the undersecretary of defense for acquisition, technology, and logistics, speaks to Defense Contract Management Agency leaders June 6, 2014, during a three-day Commanders Forum at the agency's Fort Lee, Va., headquarters. Kendall was nominated Tuesday by President Joe Biden to be the Air Force secretary. (Misha King)

Biden will nominate longtime Defense Department official Frank Kendall as the top civilian in charge of the Air Force and Space Force, the White House said in a statement announcing the president’s “intent to nominate” 11 individuals for top national security positions. Kendall must be confirmed by the Senate and a hearing date had yet to be set Tuesday, according to the Senate.

Kendall served as former President Barack Obama’s undersecretary of defense for acquisition, technology and logistics from 2012 until January 2017, among numerous roles within the Defense Department, think tanks, human rights organizations and the defense industry since his 1971 graduation from the Army’s U.S. Military Academy at West Point, N.Y. An Army veteran, Kendall served about a decade on active-duty and eventually retired from the Army Reserve as a lieutenant colonel, according to the biography.

If confirmed, Kendall would replace acting Air Force Secretary John P. Roth, a holdover from former President Donald Trump’s administration who agreed to fill the job until Biden’s choice for Air Force secretary could be confirmed.

Kendall, 72, had worked on Biden’s Pentagon transition team and had been expected to take a top position in the Defense Department. During his time as the department’s acquisition chief, he led efforts to streamline the Pentagon’s massive acquisition program. He signed off on key modernization programs, including the Navy’s future fleet of nuclear ballistic-missile submarines, and oversaw initial production of the Air Force’s future nuclear-capable bomber, the B-21 Raider.

Kendall has been, at times, critical of the F-35 Joint Strike Fighter program, the most expensive U.S. weapons system, which defense officials and lawmakers said last week has continued to face ballooning costs and production delays. In 2012, Kendall said the F-35 program, which put jets into production several years before they were thoroughly tested, “was acquisition malpractice.”

If confirmed by the Senate, his new position would put him in charge of the Air Force’s F-35 program. The Navy and Marine Corps also fly versions of the F-35.

Since leaving the Pentagon, Kendall has worked as a consultant for defense organizations and as a human rights lawyer, according to a biography provided by the White House. He has served recently with several Washington think tanks, including as a nonresident senior adviser for the Center for Strategic and International Studies’ International Security Program, as a senior fellow at the left-leaning Center for American Progress, and as a member of the Council on Foreign Relations.

Earlier in his career, Kendall worked for Raytheon, a major defense contractor and weapons builder, as its vice president for engineering.

In addition to his West Point bachelor’s degree, Kendall holds a master’s degree in engineering from the California Institute of Technology, a Master of Business Administration from Long Island University, N.Y., and a law degree from Georgetown University in Washington, according to his biography.

His nomination was welcomed by the chairmen of the House and Senate Armed Services Committees. Rep. Adam Smith, D-Wash., cited Kendall’s long tenure at jobs at the Pentagon and national security.

“Frank Kendall is exactly the kind of public servant we need at the helm of the Air Force at a time when the service is navigating so many unique challenges, including effective acquisition to meet our nation’s future threats,” Smith said in a statement Tuesday. “I cannot think of a better, more equipped leader to tackle these issues head on.”

Sen. Jack Reed, D-R.I., said in a statement that he and Kendall have a long relationship that dated back to their days at West Point — where they graduated together. Reed said Kendall had been unanimously approved by the Senate for previous top Pentagon jobs.

“Frank Kendall is an outstanding pick to serve as the next Secretary of the Air Force,” Reed said in the statement. “Frank is a proven, effective leader. He’s got the skill, experience, integrity, and temperament you want from the top civilian leader of the Air Force.”