Biden: Austin is 'the right person' to be defense secretary 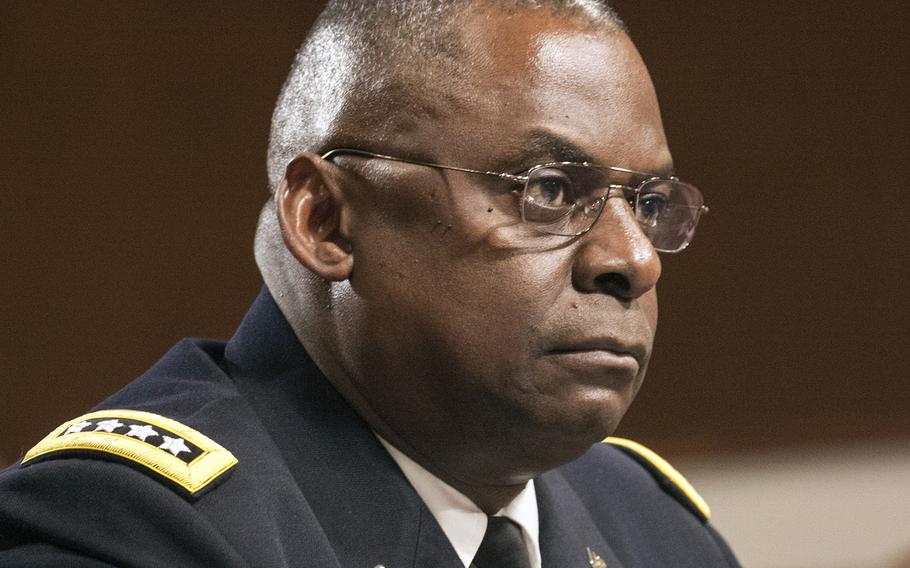 “There are good reasons for this law that I fully understand and respect,” Biden said Wednesday in a brief speech to introduce Austin to the public as his nominee. “I would not be asking for an exception here if I did not believe this moment in our history didn’t call for it — it does call for it — and if I didn’t have the faith I do have in Lloyd Austin.”

Austin would require an exception to a long-standing law that requires career military officers to spend seven years out of uniform before serving in the Pentagon’s senior-most civilian position, in an effort to ensure the military remains under civilian control. The waiver must be approved by votes in the House and Senate.

Some lawmakers expressed mixed responses this week to Austin’s nomination. The general is well respected in Congress, several of them have said, but some others are uncomfortable with the idea of granting the waiver — especially because it would mark the second such exception for a recently retired general in just four years. A waiver of the 1947 law had only been passed one other time, in 1950.

Sen. Tammy Duckworth, D-Ill., an Iraq war veteran and member of the Senate Armed Services Committee, said Wednesday that she would vote against the waiver, though she believed Congress would pass it. However, she added she would “support” Austin, if the waiver does pass.

“I believe very strongly there needs to be civilian oversight of the military,” Duckworth said on MSNBC. “And … I just can’t support that on principal. I will tell you, though, that Gen. Austin is an excellent officer, well-tested, very capable of leading the Department of Defense. I think he would be an excellent secretary of defense.”

Duckworth was among 17 Democratic senators to vote against a waiver in 2017 for Jim Mattis, the former Marine general who became President Donald Trump’s first defense secretary. Duckworth, and 15 of the 16 others who voted against the waiver, later voted to confirm Mattis.

Biden on Wednesday talked of his long relationship with Austin, especially their close work together when, as vice president, Biden was former President Barack Obama’s point person for Iraq. At the time, Austin was the top American general there. Biden said Austin had not sought the position, but the president-elect reached out to him because he was “the right person” for the job.

“His many strengths and his intimate knowledge of the Department of Defense and of our government are uniquely suited to the challenges and crises we face,” Biden said. “He is the person we need in this moment. And, given the urgent threats and challenges our nation faces, he should be confirmed swiftly.”

Austin, 67, retired from the Army in 2016 after leading U.S. Central Command for about three years. The 41-year veteran and graduate of the U.S. Military Academy at West Point, N.Y., has extensive combat experience, leading troops in Iraq and Afghanistan.

If confirmed, Austin would become the 28th secretary of defense, and the first Black Pentagon leader.

“At a time when more than 40% of our active-duty forces are people of color, it’s past time the Department [of Defense] had leadership that reflects that diversity,” he said.

Austin, who is known to avoid speaking publicly, vowed to follow the U.S. mantra of a civilian-led military, if confirmed.

“When I concluded my military service four years ago, I hung up my uniform for the last time and went from being Gen. Lloyd Austin to Lloyd Austin,” he said. “It’s an important distinction, and one that I make with utmost seriousness and sincerity.”

He said his vast uniformed experience would serve him well in the position, but he would seek regular insight from advisers who have spent more time in the civilian world.

“I come to this role now as a civilian leader — with military experience to be sure — but also with a deep appreciation and reverence for the prevailing wisdom of civilian control of our military,” Austin said. “I recognize that being a member of the president’s Cabinet requires a different perspective and unique responsibilities from a career in uniform. I intend to keep this at the forefront of my mind, and I look forward to surrounding myself with experienced, capable civilian appointees and career civil servants who will enable healthy civil-military relations grounded in meaningful civilian oversight.